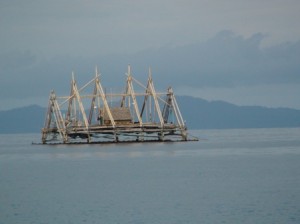 I have just returned from a two week trip to Indonesia…my third in 10 months! The goals of this trip were numerous and there are always unexpected things that pop up as well. At the beginning of my trip I visited Ujung Kulon National Park with a Rhino Protection Unit team and the Director of the Indonesian Rhino Foundation. Ujung Kulon National Park is the last stronghold of the Javan rhinoceros. We think there are about 45 rhinos in the park. The only other Javan rhinos alive in the world are in Vietnam where there may only be 3-4 animals, and one was recently poached. The trek in Ujung Kulon was a steamy one since the rainy season has not ended yet this year and the rhinos seek swampy areas so that they can wallow and keep cool. However, the adventure was well worth it because we did find fresh rhino tracks. 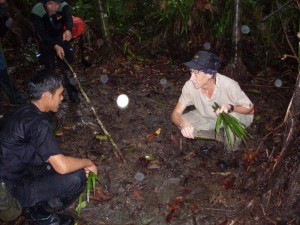 Pretty cool and definitely a rare opportunity to be traipsing through the same swamp as a Javan rhino! 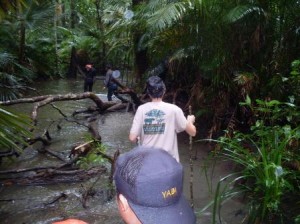 Trekking in the swamp of Ujung Kulon National Park

The second week of my trip was spent at the Sumatran Rhino Sanctuary where the Cincinnati Zoo sent its first born Sumatran rhino calf, Andalas. It was great to check on the boy who looks fabulous and is receiving the best care imaginable – including special foot baths. 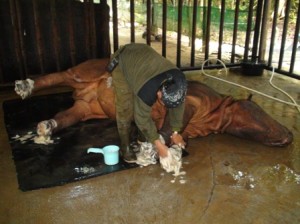 Andalas was sent to Sumatra to serve as the breeding male for the sanctuary and, so far, he is living up to our expectations. His first mate, Ratu, became pregnant earlier this year, but unfortunately lost that pregnancy very early in gestation. The two are breeding again and we hope to have good news to share again soon. 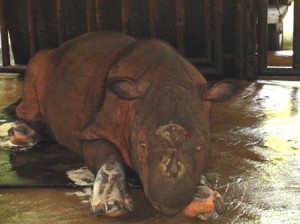 CREW’s wildlife conservation efforts extend to many corners of the globe, and despite the dreaded 14-hour airplane rides, working with our collaborators in-country is an essential part of our mission: Saving Species with Science®.