While many species become less active as temperatures drop in wintertime, the aquatic salamanders known as waterdogs are on the move.  Waterdog activity is reverse to those of the large predatory fish to which they coexist.  More importantly, primary prey items for waterdogs (aquatic insects) are restricted to leaf pack and hence accessible for snacking at this time of year. 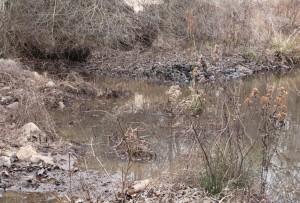 We plan our waterdog survey trips to coincide with the species natural biology.  Therefore, we have maximum opportunity to capture and collect data from adult individuals.  Over the past three years, we have surveyed for the Black Warrior Waterdog in NW Alabama during late January.  However, prior to our trip this year, heavy rain moved into the projected survey sites and we had to change our plans.  We still needed to survey for waterdogs in 3 eastern Alabama drainages:  Coosa, Alabama and Tallapoosa.  Unfortunately, the water had not lowered in these drainages, which made our chances of finding any waterdogs extremely difficult.  In scouting out spots to search for waterdogs and by talking to local residents about the area, we feel prepared to attempt another trip in the near future when water levels are lower.

The second part of our trip took us to the state of Georgia and two river drainages: Flint and Ochlocknee.  While we didn’t have much luck at the cited locality in the Flint Drainage, we headed down the road to where a tributary of the Flint crossed. The water was a few feet higher than normal. The good news was there were large leaf packs along the bank. About 2 minutes into the dip-netting process we started finding waterdogs! After a lot of driving in the previous days, it was a relief to make progress. We also checked multiple sites in the Ochlocknee River Drainage and despite working until the sun set, we didn’t find any more waterdogs. However, the creeks we went to looked promising. This part of Georgia had not yet received much rain. The good news is we can pick this drainage up in Florida when we go later in the year.