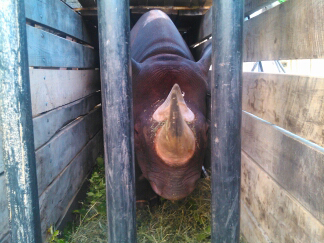 Klyde’s crate conditioning is going very well!  Since my previous post, keepers have continued to work with him daily.  To start, each evening they would close off access into the crate, giving Klyde a break from seeing it through the night.  Then, in the morning, they would re-open it and he would find it contained his breakfast and extra treats.   Each day keepers moved more and more of his breakfast into the crate, creating an inviting space that allowed Klyde to feel comfortable and confident.  After several days, everyone felt they were at a point when no food needed to be offered in his other stalls except for in his crate.  This was no issue for Klyde, as every crate experience he has had thus far has been very positive.  He had no problem with his new designated feeding area.  Each morning the food would appear an inch further back in the crate, from the day before.  And every day, Klyde never even thought twice about his advancement into the crate.

By day nine, keeper Marjorie was able to stand outside the crate, toward the front and encourage him to come in as she tossed treats into his food pile to make every inch of progress as smooth as possible.  Days 10 and 11 were breakthrough days for Klyde’s progress – he decided that his crate was  really positive place to be and confidently walked in until he had all four feet in the crate!  He was still not quite close enough to hand feed but having all four feet in, making that step up into the crate was a HUGE progression and his keepers were thrilled.  Later on day 11 of training Marjorie decided to try one more quick session and attempted to get Klyde to walk in far enough to hand feed.  He finally did it!!  Marjorie was able to reach his lip and give him some of his favorite cookies for entering that far.

We are all so excited about Klyde’s progress moving forward!  In the first 11 days of training it has gone far better than ever expected, but that’s what happens when keepers and animals have such a wonderful and positive relationship!  Klyde is willing and wanting to work with his keepers and his keepers are allowing him to move at his comfort level… setting him up for success is the most important part of training!