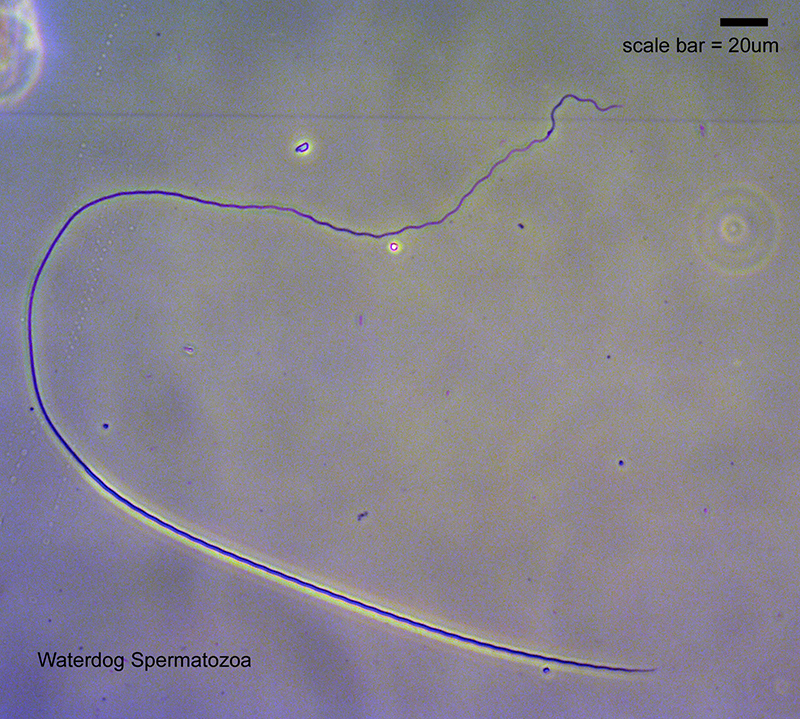 Waterdogs exhibit distinct periods of activity and feeding depending on the season.  Reproductive function is also highly seasonal.  Male waterdogs produce spermatophores in Fall, at which time females collect and store the sperm internally for several months before laying eggs in late Spring/early Summer.  Waterdogs are unique among amphibians in that fertilization takes place internally as eggs are being deposited.

Using a combination of exogenous hormone administration and seasonal shifts in temperature and lighting we’ve been able to induce spermatophore deposition from male waterdogs housed in CREW’s aquatic salamander lab.  Spermatophores are an organized packet of sperm.  Each spermatophore contains an outer mucoid layer and a sperm rich cap.  We often don’t find the entire spermatophore, but only evidence of the mucoid layer, in tanks where both male and female waterdogs are housed together.  It is believed that the female waterdog takes up only the sperm rich fraction of the spermatophore into her cloaca.  Upon microscopic examination, we’ve measured individual waterdog sperm at over 900 um in length- that is over 18 times longer than the average human sperm cell (which is just a mere 50um)!

Video footage from CREW’s Aquatic Salamander Lab captured the deposition of a spermatophore from a male waterdog named ‘Sugar Bear’. Look closely on the log where the male is residing and you will see the white cap of the spermatophore upon his exit to an adjacent log.  Sugar Bear is the daddy of our soon to be hatched waterdog babies so we know he has the right stuff!

One thought on “CREW Waterdogs Have the Right Stuff”