I recently had the privilege of traveling to Tucson, Arizona to attend the Invertebrates in Education and Conservation Conference (IECC). The IECC is an annual gathering of professionals dedicated to the understanding and preservation of invertebrates. The IECC combines traditional conference presentations with excursions into the field to look for invertebrates. We were based at a swank yet surprisingly affordable resort located in the foothills of the Catalina Mountains that turned out to be a great place to observe wildlife.

On early morning walks I encountered Swallowtail Butterflies that congregated on the resort’s watered lawn to drink, Gambel’s Quail and Black-chinned Hummingbirds. On walks before bed I encountered Desert Blonde Tarantulas, Giant Mesquite Bugs and numerous species of lizards. Sadly, I missed the Gila Monsters and Western Diamondback Rattlesnakes that were nocturnal visitors to the resort during my stay.

Field days were scheduled to give conference attendees the opportunity to explore.  I traveled into Saguaro National Park, stronghold of the legendary Saguaro Cactus. Found only in the Sonoran Desert these giants can exceed 40 feet in height and live upwards of 200 years. Surrounded by Saguaros and feeling the warm desert breeze I understood why so many have fled the eastern United States for Arizona.

Heading south to the town of Patagonia we left the desert behind and entered a woodland realm dominated by rocky outcroppings, Harvester ants and free-range cattle. So common were cattle I became less concerned about stepping on a rattlesnake and more concerned about stepping on a cow-patty. I was supposed to be assisting my colleagues in the excavation of ant nests but it’s tough to work a shovel with a camera in one hand and Pleasing Fungus Beetles in the other. 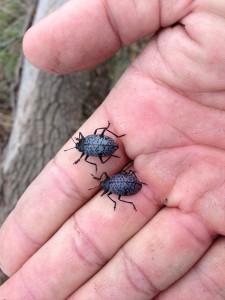 My first time attending the IECC was everything I could have hoped for and more. I met colleagues in person I’dpreviously known only by emails and phone calls. I visited one of the world’s most amazing ecosystems and saw incredible wildlife. I found genuine inspiration in my colleagues and in the Sonoran. Most importantly, I got to hold a baby Horned Lizard.

One thought on “I left my heart in Tucson”