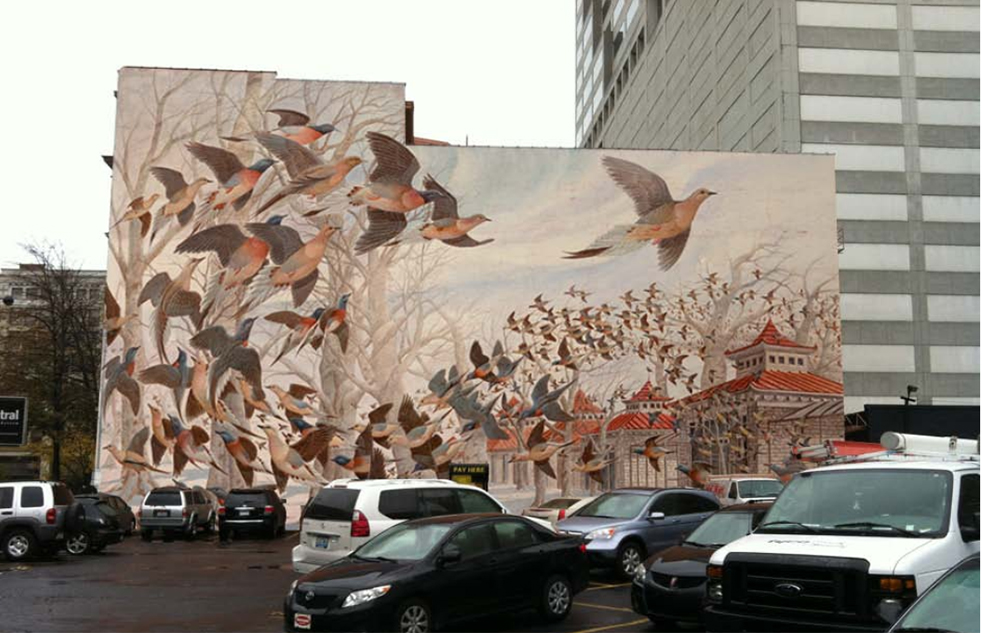 The passenger pigeon was once the most abundant bird in North America, and perhaps the world. In 1800, North America was filled with more than five billion passenger pigeons. It is hard to imagine the scope of their flocks. In 1813, ornithologist and wildlife painter John J. Audubon calculated a single flock he observed in Kentucky to contain more than 1,115,000,000 birds! An authority on the passenger pigeon noted that the birds moved “in such enormous numbers as to confound the senses.” Many reports described flocks of the birds blotting out the sun.

It is difficult to fully understand what  it would be like to look up and see a flock of these birds flying overheard, to hear their billions of wings beating together, to feel the air moving over you from their flight. We may find the massive flock of starlings, called a murmuration, in this video unbelievable, but to imagine what a flock of passenger pigeons might be like, you would have to multiply the size of this murmuration by thousands!

The story of the passenger pigeon is a poignant example of nature’s abundance and humanity’s ability to exhaust seemingly endless riches. We also have the ability to save today’s imperiled species from suffering the same fate. The Cincinnati Zoo is part of an international effort called Project Passenger Pigeon, which will bring together scientists, conservationists, educators, and artists, musicians, and filmmakers to increase awareness of the passenger pigeon’s story and use it as an opportunity to engage people in current issues related to human-caused extinction, promote species conservation and habitat preservation, and motivate people to get involved in sustainable actions that promote biodiversity and deter future human-caused extinctions.

Those of you in the Cincinnati area  can experience a larger-than-life version of world-renowned wildlife painter John Ruthven’s latest painting titled Martha, the Last Passenger Pigeon. Reproduced as a mural on the side of a building at 15 E. Eighth St. in downtown Cincinnati, it features a flock of passenger pigeons, led by Martha, in flight at the Zoo. The mural was dedicated on September 19. Forty years ago, John Ruthven captained an effort to create the Passenger Pigeon Memorial at our Zoo to honor the passing of the passenger pigeon and Martha. He is now collaborating with us to renovate the memorial in time for the 100th anniversary of Martha’s death.

Tune in each month as we celebrate what’s working in wildlife conservation leading up to the commemoration of 100 years since Martha, the last passenger pigeon, died at the Cincinnati Zoo.