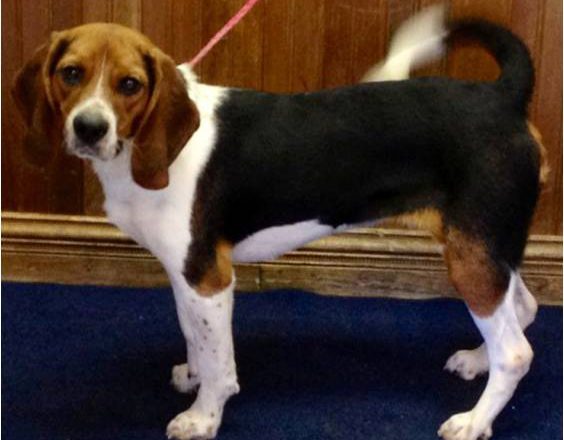 Over the past two weeks, Elvis the pregnancy diagnosing beagle, has been hard at work smelling fecal samples (yes, fecal samples) collected from 17 female polar bears, including the Cincinnati Zoo’s own female, Berit. Currently, there is no definitive test for pregnancy in polar bears, so Elvis has been trained to identify samples that originated from pregnant females in an effort to predict which females are due to have cubs in a few weeks. Last week, Elvis demonstrated an impressive 100% accuracy on the known ‘test’ samples he had never smelled before, signaling appropriately on the pregnant samples while ignoring those that came from non-pregnant individuals.

A dog’s sense of smell is incredibly powerful- Elvis possesses around 225 million olfactory (smell) receptors in his nose, compared to just 5 million in a human’s.  Dogs also make better use of another olfactory organ, Jacobson’s organ, allowing them to detect pheromones which are other chemical communicators of physiology (and possibly pregnancy?). Additionally, the part of a dog’s brain dedicated to analyzing smells is 40 times greater than ours. As a result, a dog’s sense of smell is 10,000 to 100,000 times better than that of humans.

“If you make the analogy to vision, what you and I can see at a third of a mile, a dog could see more than 3,000 miles away and still see as well” said James Walker, former director of the Sensory Research Institute at Florida State University.

Put another way, while we would probably notice if our coffee has a teaspoon of sugar added to it, a dog could detect a teaspoon of sugar in a million gallons of water, or two Olympic-sized pools worth, according to Alexandra Horowitz, a dog-cognition researcher and author of Inside of a Dog. 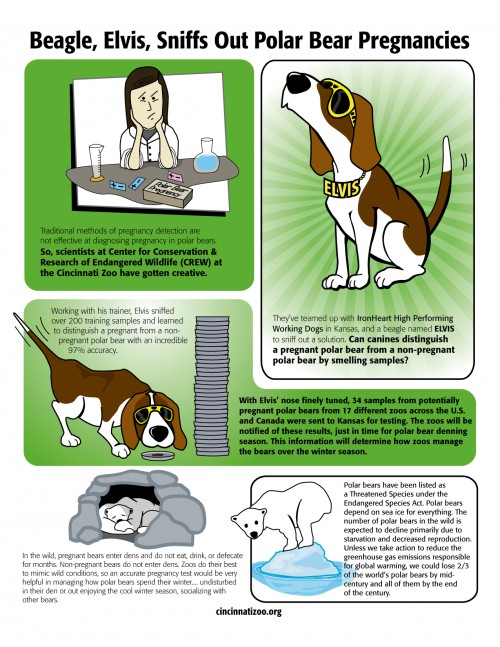 Because their noses are so sensitive, precautions need to be taken so we don’t inadvertently compromise the results. Samples are double-bagged and stored separately to make sure scent cross-contamination doesn’t occur and the tubes that hold the samples on the training boards are thoroughly washed between samples- a time consuming process. Currently, Elvis is working through two-to-three samples, in replicates, from each of the 17 possibly pregnant bears to ensure his predictions are consistent for the same individual. Each institution will be notified of the results for its bears within the week.

So while it might sound like a terrible job to us, we joke that Elvis is the envy of his peers at Iron Heart High Performance Working Dogs. While the other detection-dogs-in-training are smelling bed bugs, explosives, drugs, or toxic mold, Elvis gets to smell poop and is even rewarded for it- isn’t that every dog’s dream?