The Blue-throated Macaw, found in the tropical savanna of northern Bolivia, is considered one of the most threatened bird species in the world.  For the past three years, the Cincinnati Zoo & Botanical Garden has supported an effort to enhance Blue-throated Macaw reproduction in the wild through the Bird Endowment’s Nido Adoptivo project.. Initiated in 2007, Nido Adoptivo has installed hundreds of nest boxes to supplement natural breeding.

Intensive research on the macaw’s flight and migration patterns determined placement of the nest boxes.  The box design was modeled after natural nests found in holes of palm trees where chicks successfully hatched and fledged. Nest box position, depth, vertical and horizontal lengths, and the size of access holes were studied.  Additional modifications will be implemented for the 2013-2014 season. 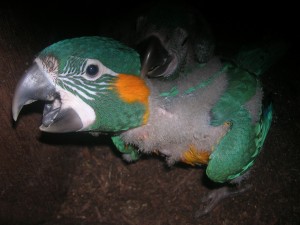 2012-2013 was the most successful year yet. Ten healthy Blue-throated Macaw chicks hatched and fledged from the boxes.

For the first time, a breeding pair was noted with leg bands, meaning they had been hatched some years earlier in the program.

A total of 39 Blue-throated Macaw chicks have been produced in Nido Adoptivo™ nest boxes during the previous six breeding seasons.

As a consequence of the program’s ongoing successes, we continue to see the population increase in the Southern Zone, with flocks of Blue-throated Macaws now traveling between five local private ranches (by marcus). This was unheard of in the area five years ago.

Cincinnati Zoo & Botanical Garden is one of the 27 sponsors of the new and improved nest boxes being monitored during the 2013-2014 season which is underway.

Nido Adoptivo™ has begun the funding phase of the 2014-15 breeding season in anticipation of building upon seven consecutive years of success in Bolivia.

To learn how you can help support the Nido Adoptivo project, visit http://www.birdendowment.org/index.shtml.

One thought on “Saving the Blues in Bolivia”