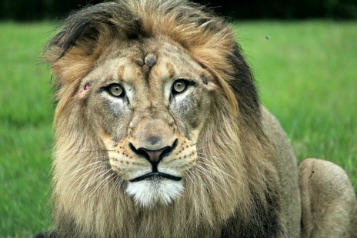 John and Imani, our two African lions, are getting to know each other behind the scenes.  To make their eventual pairing as successful as possible, the introduction process is slow, strategic and multi-phased.

Today we gave John some straw from Imani’s enclosure.  You can see his response in the above photo.  The smile-like expression on his face, called a Flehmen Response, indicates that he’s “smelling” the scent using his mouth.  There is a special organ between the roof of the mouth and the palate that helps detect certain pheromones and chemical cues. Basically, John is trying to figure out if Imani is sexually receptive by smelling her urine. 🙂 In the animal biz, we often call it “stink face”! It looks pretty good on John! 😉

Imani showed far less interest in the pile of John’s straw that she received, which is not surprising since we are  not seeing any estrus behaviors from her right now.

Check back for more updates on John and Imani’s introduction process.

One thought on “Lion Enrichment”