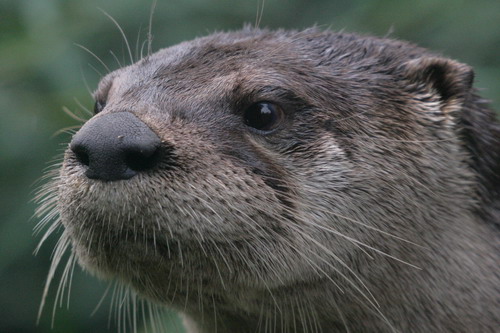 Charismatic and curious North American river otters are so much fun to watch, but to get them to breed? That’s a whole lot trickier! North American river otters, as their name would suggest, live as far south as the Florida everglades, throughout most of the lower 48 states all the way north to the sub-arctic regions of US (Alaska) and Canada.  For these otters, when to breed and give birth needs to be timed so the pups are born when it’s not too cold and there are plenty of resources for mom and pup(s) to thrive.  Basically, otters in the south give birth and breed much earlier in the season than otters living further north.

In addition, female otters undergo a process known as delayed implantation. Fertilized otter eggs start developing into embryos, but stop developing for 7-10 months until they are eventually triggered to implant into the uterine wall and develop once again. The female otter gives birth (litter size 1-4 pups) approximately 70 days after implantation starts. Delayed implantation is what, in part, helps river otters time when they give birth.  So how does one know when implantation has occurred and when their otter may give birth? — By monitoring the hormones in their poop!

Each year starting usually November through January/February, US Zoos send otter fecal samples to CREW hoping to figure out if their otter may be pregnant and when she may be due. This season we monitored fecal samples from 11 river otter females and we were able to determine 8 of these females were possibly pregnant and 6 of those have already given birth {for example: pueblo zoo, buffalo Zoo}, making it a banner year for river otter babies!

However, the story doesn’t end there. Our research has shown that female otters born further south and moved to another zoo much further north, don’t always respond to the environmental cues encountered at their new latitude and adjust when they should breed and give birth – making it hard to know when to pair otters for breeding – but those fecal hormones have also proven useful in determining when to pair up otters as well {North Carolina}.