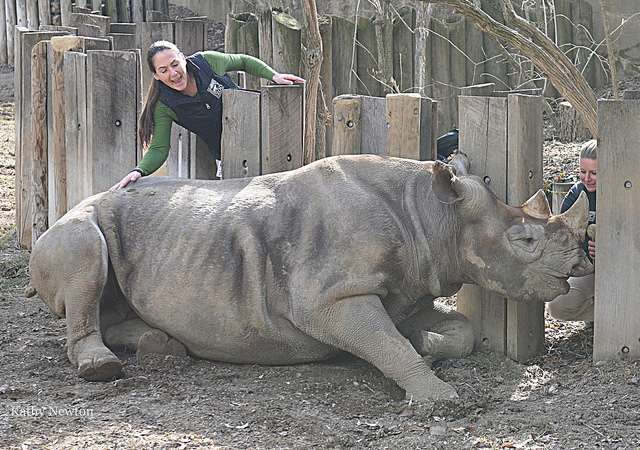 At the end of last summer I wrote about training Klyde, our male black Rhino, to happily enter a crate, so he could travel to his new home and hopefully produce a bouncing baby rhino calf.

But when Klyde left he also left us with an empty exhibit and a hole in our heart.  He would come down to our encounter area each and every day allowing visitors to have an up close experience, watching him do his training behaviors. All could appreciate how strong and intelligent he was, how all 3,450lbs of him moved effortlessly, and how truly magnificent he was.  He was after all the mascot of the zoo, the rhino in our logo, who could ever fill this void or even come close to replacing him?!

Enter Seyia!  This three year old adolescent and southern bell came to us from her birth zoo in Baton Rouge, Louisiana. Leaving her mom and the only keepers she has ever known, this brave little lady arrived at the Cincinnati Zoo in late Aug of 2013.  In a few short weeks she went from being timid and little nervous, of all that was new, to her to relishing her keepers and exhibit.  When she found the mud wallow for the first time you could physically see the joy and excitement on her face.

Adjustment period flew by for her and quickly she was ready to learn more than just her exhibit and keepers.  She was ready to start training!  Marjorie, her main keeper, had a list for us to begin training from.  The first was for Seyia to lean her body against the poles of her enclosure, so she could be bathed, skin checked and oiled, and just for an overall good evaluation of her health.  We couldn’t believe how quickly she caught on to asking her to move over.  Then we added asking her to place her front foot on a block so we could begin doing foot care, she figured this out rapidly too!  The first time the “light bulb” went on, she lifted her foot so high we were laughing about her overzealous nature to please. The next hurdle was teaching her to lie down. Imagine asking a 2,400 lb animal to place herself in the most vulnerable position, in front of hundreds of visitors. She is now doing this reliably out on exhibit during her training sessions!

Smart is not all Seyia has going for her, she is also very sweet natured and craves attention from her keepers.  So much so she began calling to them, something black rhino’s are NOT known to do.  Marjorie and I decided it would be an incredible experience for patrons to be able to hear this animal actually make a sound.  So we began capturing the behavior and now she will “speak” on command.  She is still a little unsure how loud we want her be outside, but inside she is quite happy to be loud all day!  Her vocal call is such a different sound.  Some compare it to a whale, others to a bird, and some say it sounds like a child’s kazoo.  The best part is this spring and summer you will be able to hear her, see her, and watch her train with Marjorie in her exhibit!

3 thoughts on “Getting Ready For Summer With New Black Rhino Seyia!”