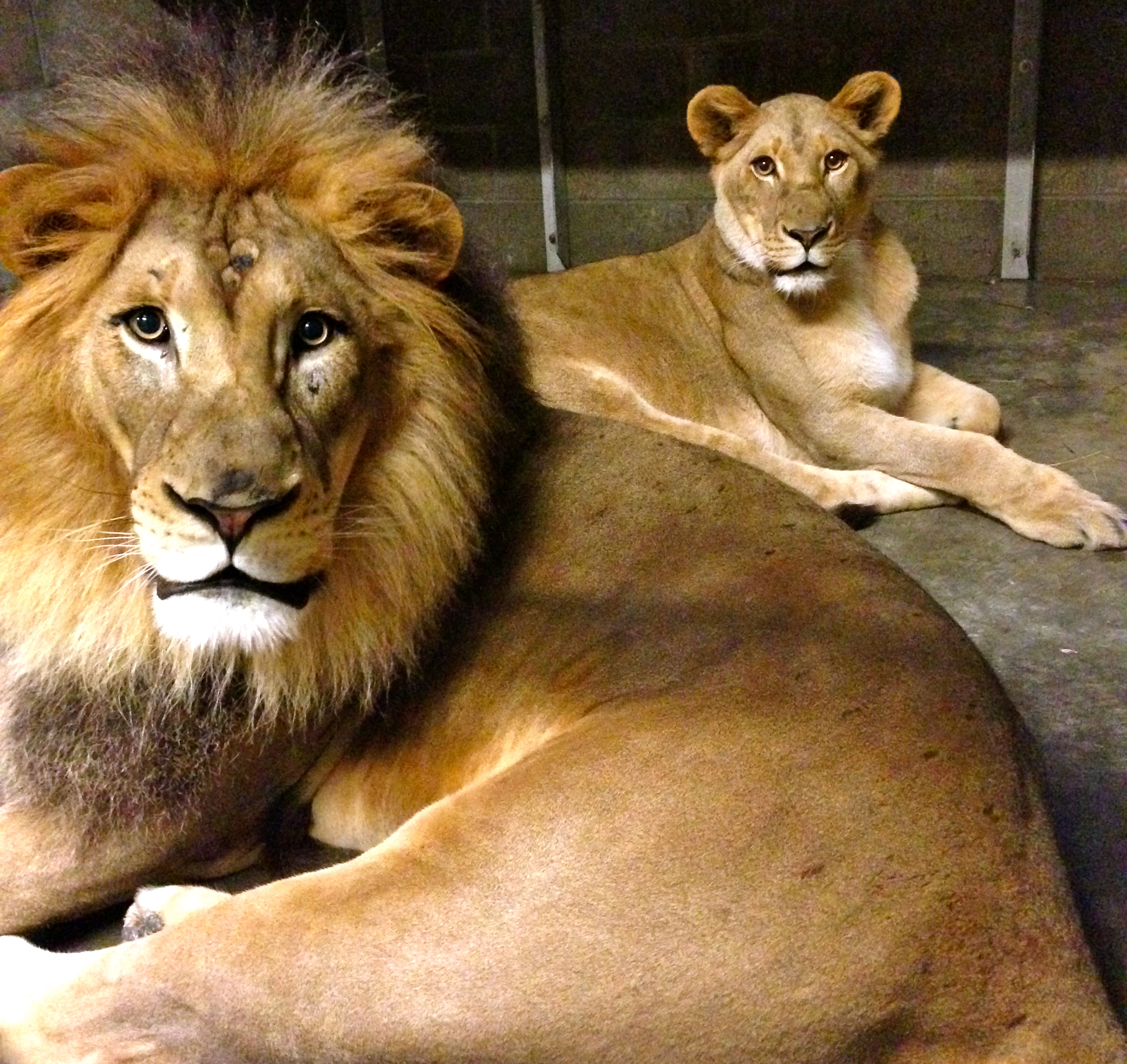 Zoo guests may have noticed that John the lion has not been in his yard for the past couple of days. He’s been absent for a very good reason! On Wednesday, we opened the doors that separated John and Imani and introduced the male and female lions to each other for the first time!

This introduction has been a long time coming; several months of close monitoring and careful preparation have led up to this big moment for our young lions. For the last year, John and Imani have been living in separate enclosure areas. Typically John was housed in 2 indoor enclosures and had access to our exhibit yard. Imani was being housed in 3 indoor enclosures (across the hall from John), and had access to her own private play yard as well. Though the lions could see, hear and smell each other on a daily basis, they’d never met in the same space until now.

In order to ensure a successful first meeting, keepers wanted to be sure that both lions were fully grown, sexually mature, and confident and comfortable in their new homes at the Cincinnati Zoo before the lions began to share a territory. Additionally, keepers had to plan an introduction timeline that would be conducive to the potential birth of cubs (since John and Imani are a recommended breeding pair within the African lion SSP). An SSP, or Species Survival Plan, allows different zoological facilities to cooperatively manage specific, and typically threatened or endangered, species populations. In order to receive a breeding recommendation for two animals, SSP coordinators assess the representation of each animal’s genes within the captive population. If the genes of both individuals are not overly represented among the captive population, and if there is a zoo with the space to house the offspring, then you get the “okay” to breed the pair.  Utilizing SSPs allows zoos to ensure that we are maintaining as much genetic variation as possible among captive populations, and also avoiding inbreeding and unwanted pregnancies.

With warmer weather on the horizon and both lions showing positive indicators that they were ready to meet, the keepers determined that the time was right to introduce John and Imani. Initially, both cats were a little shy and hesitant to say hello, but after a few minutes of awkward, sideways glances, John came through the door for a sniff.  Some grumbles, barks and swats ensued (perfectly normal and expected behaviors), and then both lions quickly settled down and even made some attempts at breeding!

The two have been spending time together behind the scenes ever since, and the keepers are absolutely thrilled with their progress. John and Imani will slowly be introduced to the exhibit yard together according to their comfort level. While John is perfectly at home in the exhibit yard, Imani has not been out there yet, so we will respect her need to move forward slowly. Her comfort level will likely dictate when our lions will be publicly on exhibit together, and we appreciate everyone’s patience and understanding during this transition period.

On behalf of our lions, and all the keepers and staff involved, thank you all for your support and well-wishes! Our zoo guests have been so great about accepting John into the Zoo family, and we can’t wait for you all to meet Imani and see our newly bonded pair out on exhibit together soon!

8 thoughts on “John the Lion Meets His Match”