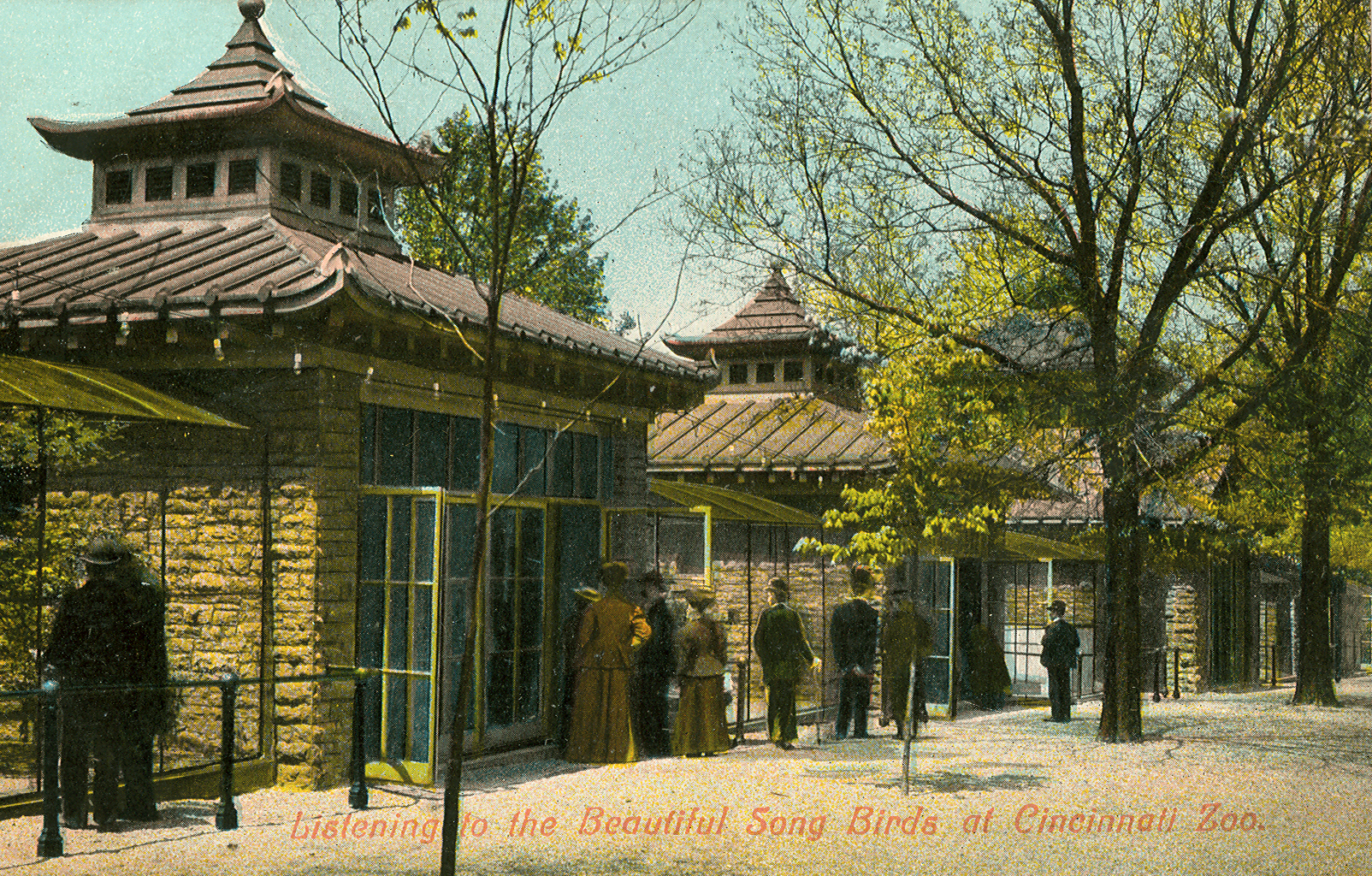 We’ve been busy! Here’s an update on various projects and events we’ve been working on surrounding the commemoration of the centennial of the passenger pigeon’s extinction on September 1:

The Passenger Pigeon Memorial itself is of historic importance.  Built for the September 18, 1875 opening of the Zoo, it is the last remaining in a series of seven rectangular pagoda-type, tile-roofed buildings connected by wire summer cages in a complex 320 feet long, known as the Aviary or “Old Bird Run.”  The center building, larger than the others, was more elaborate, with pediments on each facade, and a short square tower capped with a pseudo-onion dome.  The six smaller units of the Aviary were demolished in 1974-75.  The large central pavilion, which was the actual final home of Martha, was retained, moved about 50 feet northwest of its original location, and restored as the Passenger Pigeon Memorial, opening in 1977.  Collectively with the Zoo’s Reptile House – the nation’s oldest Zoo building – and the Elephant House, built in 1906, the Passenger Pigeon Memorial constitutes the Zoo’s designation as a National Historic Landmark.

A reproduction of John Ruthven’s recently completed painting of Martha – the Last Passenger Pigeon, will draw visitors’ attention from the main Zoo path.

Inside the building, updated lighting and ceiling treatment will brighten up the space.  All new interpretive signage will comprise flat wall panels featuring rich visual images and appropriate narrative.

Artifacts such as a net and stool pigeon and wood carvings of a pair of passenger pigeons by our own Gary Denzler will be presented in the exhibit as well.

The update will speak to the conservation of endangered species, using the story of the passenger pigeon as a lesson from the past for a sustainable future. First, it will explain the story of the passenger pigeon and its extinction, why it happened, and the scope of this loss. Next, the exhibit will describe how the passenger pigeon’s extinction was a wake-up call that spurred the conservation movement in America, highlighting the stories of native species that were nearly lost, such as white-tailed deer.  Then, the exhibit will present examples of species’ conservation efforts in which the Zoo is involved, including the Sumatran rhino and Autumn buttercup. Finally, the exhibition will invite visitors to get involved.

The dedication of the newly renovated exhibit will take place on September 1 beginning at 12:30.

We are in the midst of a folding frenzy! Thousands of paper passenger pigeons are being folded by summer campers, visitors, staff and volunteers, which will be suspended from the ceiling of the Education Center at the Zoo later this month.

Add your pigeon to the flock! Download the foldable passenger pigeon template, print it off (double-sided, 11 X 17, full color is best) and fold it. Then send it or bring it to the Education Center at the Zoo to be hung with thousands of others before September 1.

Along with the Ohio Ornithological Society (OOS), the Zoo is hosting a Passenger Pigeon Weekend symposium at the Zoo on August 29 & 30. Friday night will be a “Martinis with Martha” fundraiser to benefit the Zoo’s Center for Conservation and Research of Endangered Wildlife (CREW) and the OOS Conservation Fund with food, drinks, live music and guest presentations. Saturday morning brings an assemblage of guest speakers with stories about lessons learned from the passenger pigeon, including Joel Greenberg (author of  A Feathered River Across the Sky), wildlife artist John Ruthven, Jim McCormac (author of Wild Ohio: The Best of our Natural Heritage) and Zoo Horticulturist Brian Jorg. And much, much more!

Today, John has taken it a giant step forward, with his painting, “Martha – The Last Passenger Pigeon.” This print will be available for sale before and after his lecture. The price is $200.00. All prints are signed and numbered. The size is 30 x 20 inches.

To read the other posts in this series, click here.