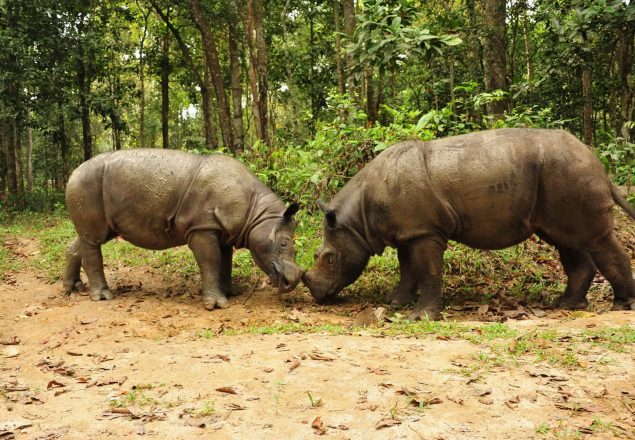 “Bina to the Wallow” were words frequently heard over the walkie-talkie radios at the Sumatran Rhino Sanctuary (SRS) during our 2007 trip to the Indonesian island of Sumatra. My husband and I were there for three months to work with Indonesian colleagues and await the arrival of Sumatran rhino ‘Andalas’ from the United States- an absolutely amazing and life changing experience.

Every morning, the rhinos at the SRS come from their large forested areas to paddocks where they are visually inspected by the keepers and hand fed specially collected browse. When the rhinos were finished with their morning routine they would go back out into the forest and do what rhinos like to do best. For a special rhino named Bina, her favorite activity was wallowing. The phrase ‘Bina to the Wallow’ was frequently announced on the radio after Bina left her paddock for the forest-since this is where she would head after the morning check-in.

Now, you may think a wallow is a wallow is a wallow. We learned that for rhinos, this is far from the truth. Just like we like to arrange our rooms to suit our individual style, rhinos similarly make wallows to their liking. They use their head (horn) and legs to stylize their wallow. Check out this video of Bina and her wallow- if you listen closely you can hear the sounds of insects and Siamangs in the background. Bina likes to loosen dirt from the sides of the wallow to create a thicker liquid base to coat herself in -helping protect her skin from biting insects. You can also see how exhausting proper wallow making can be!

Here’s a picture of Bina once she finished making her wallow- what a happy rhino!

I know that today, seven years later, that familiar announcement “Bina to the Wallow” is being made on a radio half a world away and it’s great to know that there are places like the SRS and rhinos like Bina.

Here at the Cincinnati Zoo, our rhinos also get the chance to stylize their wallows. Sumatran rhino Harry prefers his wallow to have more liquid, while our African black rhino Seyia prefers a pastier mud mix for her wallow.

How about you? Post a photo or video of your wallow style on Cincinnati Zoo’s Facebook page or Twitter or Instagram with #muddyforrhinos. One lucky winner, chosen from all #muddyforrhinos submissions received by September 19, will get to meet a Cincinnati Zoo rhino behind the scenes. Also, be sure to come out on September 21 to help the Cincinnati Zoo celebrate World Rhino Day. Wallow In It contest details…

One thought on “Bina to the Wallow”