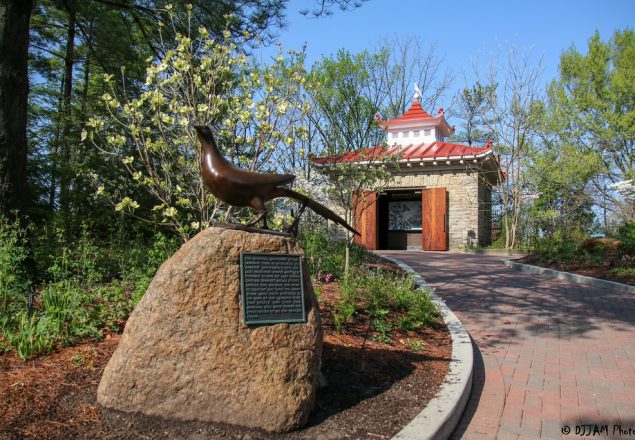 Numbering in the billions in 1800, the passenger pigeon was formerly one of the most abundant bird species on Earth. On September 1, 1914, Martha, the last known passenger pigeon, passed away at the Cincinnati Zoo after tireless efforts over several years to find her a mate.

To commemorate the 100th anniversary of Martha’s passing in 2014, the Zoo renovated its Passenger Pigeon Memorial, transforming it from a single-species memorial to an educational exhibit with a positive and hopeful conservation message that segues from the story of the passenger pigeon to modern wildlife conservation efforts.

A small crowd of Zoo visitors and staff along with media representatives gathered at 11:00 AM on September 1, 2014, as Zoo Director Thane Maynard dedicated the Memorial and officially reopened its newly restored doors. Watch the dedication video here.

Visitors to the Memorial are greeted by a large reproduction of John Ruthven’s 2013 painting of Martha, the Last Passenger Pigeon on the entry wall.

A display case on the back side of the entry wall contains a reprint of John J. Audubon’s Passenger Pigeon hand-colored engraving from The Birds of America, along with an actual net used to catch passenger pigeons, a platform stool to which blinded pigeons were tied as decoys, a cast model of a passenger pigeon and an Aldo Leopold quote. 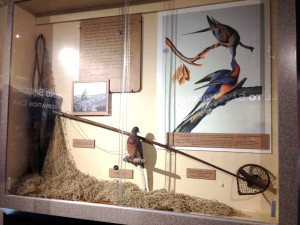 Interpretively, the exhibition flows from left to right along the interior walls, circulating around an octagonal case in the center of the building containing passenger pigeon sculptures carved by Gary Denzler.

Signage was designed based on elements from Ruthven’s painting with pop-up panels featuring colorful images and text. The first wall tells the story of the passenger pigeon and its extinction, why it happened, and the scope of this loss.

Next, it describes how the passenger pigeon’s extinction was a wake-up call that spurred the conservation movement in America, highlighting the stories of native species that were nearly lost, such as white-tailed deer.

The last wall introduces conservation champions of the Zoo and presents examples of how we are working to save species today, including the Sumatran rhino and the American burying beetle, from going the way of the passenger pigeon.

The rehabilitation of this historic building and exhibit was made possible through the generosity of the H.B., E.W. and F.R. Luther Charitable Trust Foundation, Fifth Third Bank, and Narley L. Haley, Co-Trustees.