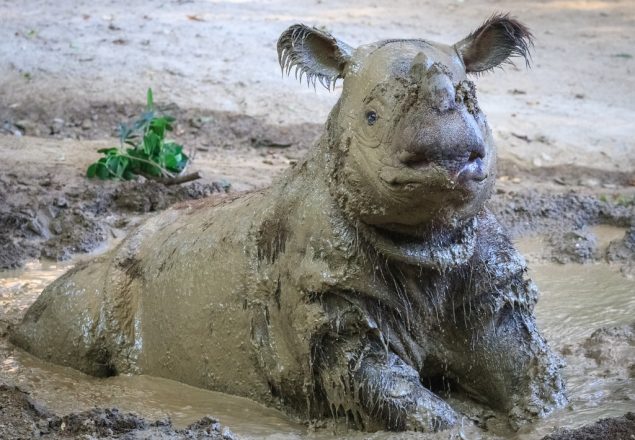 Over the past year, Zoo staff and volunteers have been getting ready to celebrate World Rhino Day.  This year’s festivities will be held from 10 am to 4 pm on Sunday, September 21.  The goal for this event is to raise funds for rhino conservation and increase the public awareness of the major challenges faced in protecting wild rhino populations.  The Zoo is proud to exhibit three species of rhino; the African black rhino, the Indian rhino and the Sumatran rhino.  Zoo visitors can take part in family activities, animal demonstrations, keeper encounters and a rhino-riffic raffle.  The day will start with the official announcement of the winners for our Save the Rhinos poster contest.  The day will no doubt be a Rhinotastic success!

The raffle items this year include rhino-themed gift baskets, a one-year membership to the Cincinnati Zoo & Botanical Garden, Rhino Rembrandt paintings artistically designed by the Zoo’s African black rhino ‘Seyia’ and Sumatran rhino ‘Harapan’, a one-of-a-kind Sumatran rhino footprint casting created by keeper and artist Lindsay Garrett, and an amazing print of Sumatran rhino ‘Harapan’ as designed and painted by artist Ali Armstrong as part of her ‘Scarce Project’.

Be sure to also come out to the Zoo on Monday, September 22, from 7-9 pm to hear the State of the Rhino Lecture by CREW Rhino Scientists Dr. Terri Roth.  Tickets to Dr. Roth’s lecture can be purchased online.  A rhino marketplace will take place in the lecture hall before and after the talk and another rhino raffle occur.  In addition, renowned children’s book author Mary Kay Carson and photographer Tom Uhlman will be available before and after the lecture to sign copies of their critically acclaimed book, Emi and the Rhino Scientist.

Come one, come all to help us celebrate rhinos!

One thought on “Cincinnati Zoo is Ready to Celebrate World Rhino Day!”