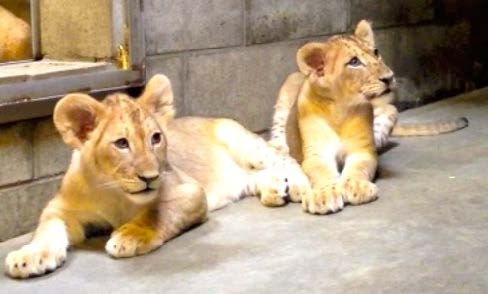 For all of you who have been pining to meet the cubs and lamenting that they aren’t on exhibit, allow me to offer a small consolation: lion cubs this young are actually a little bit boring! Now, before you gasp at my impassivity, allow me to explain. In the wild, lions are inactive for up to 20 hours a day. That means there are only 4 hours a day where lions aren’t sleeping or resting. What I’ve learned in the 3 weeks following November 13th is that lion cubs and nursing mothers are even less exciting! For 3 weeks, we’ve seen little more than nursing, sleeping and grooming from our young little bunch. But in this last week (the cubs’ 4th week of life), something magical has started to happen.

The cubs are finally becoming more mobile and a little braver, and with these new developments, their little personalities are beginning to shine through! Since their sexes are still a mystery to us, we’ve been referring to the cubs based on their birth order (Cub #1 was the first born, then came Cub #2 followed by Cub #3). Here are some of my observations of the newest members of our African lion pride.

Cub #1 was the first into the world and has continued to be the pioneer of the group ever since.  Cub #1 has always appeared to be the largest of the 3, and it’s hands-down the bravest in the bunch. #1 mastered the art of crawling outside of the nest area first, scaling the hackberry log and sometimes tumbling head-first to the ground below in order to gain unchallenged access to Imani for some prime nursing time and one-on-one attention from “Mama”.

Cub #1 is the most vocal of the bunch as well, often standing on the hackberry log and just crying out to anyone who’ll listen. Sometimes Cub #1 will do this vocalizing immediately after a private nursing session, so I’m inclined to think that maybe it just likes to hear itself make noise? Imani seems to be the toughest on Cub #1, often batting it around and almost “playing” with it in a manner she doesn’t usually employ with the other two. But Cub #1 can absolutely handle the tough-love and isn’t shy about letting mom know if it isn’t appreciated. Cub #1 seems very strong-willed and stubborn, relentlessly pursuing its interests even when Imani tries her best to keep #1 safely inside of the straw nesting area. And on more than one occasion, I’ve caught Cub #1 chewing on Imani’s tail. 🙂 If genetics play any role in the development of personality, then Cub #1’s independence is most definitely from Imani’s side of the gene pool.

Cub #2: The Pacifist, Easy-Going and Low-Maintenance

Cub #2 flew under the keepers’ radars for a good long while, not really standing out for any reasons (good or bad). Cub #2 seems to contribute the least to Imani’s parental challenges, often staying put wherever it’s placed and waiting patiently for Imani to return to the nest. Cub #2 rarely calls to or seeks out Imani and simply takes the opportunity to nurse whenever it’s readily available. Cub #2 patiently accepts being groomed and never resists when Imani attempts to pick it up. Whenever a skirmish breaks out between siblings over a nipple, Cub #2 is the most likely to compromise by relocating to another teat. “It’s okay, I’ll just go nurse from this nipple instead.”

Cub #2 rarely strays away from the group and seems the most dependent upon the companionship of its siblings. I watched once as Cub #2 was awoken from a nap by the sounds of Cub #1 nursing outside of the nest box. Cub #2 got up to investigate and stopped on top of the hackberry log, staring in the direction of Imani and Cub #1. It looked like #2 was trying to gather the courage to go over the log and join the nursing party, but after a couple of feeble attempts to make it over the log, #2 simply gave up and went back to nap beside the warmth and comfort of its other sibling. Adventurous is not a word I’d use to describe #2. Cub #2’s affinity for companionship and its penchant for the safe and familiar remind me very much of John!

Cub #3 has been on my radar from the moment it was born. Easily the runt of the litter, #3 has had some struggles from the beginning. Unlike its siblings who picked up nursing quite easily, Cub #3 really had to practice and develop the skill-set. Keepers would watch as Cub #3 would set out in the direction of Imani and its nursing siblings, and unnervingly, in many cases, Cub #3 would struggle to make it to a teat. Sometimes it would randomly turn and start heading in another direction, and sometimes it would make it all the way up to Imani’s belly, only to keep going and climb up and over her back instead of stopping to nurse. On most occasions when Cub #3 did manage to find itself in the correct position to nurse, it would fight for an already occupied nipple instead of latching on to one of the two readily available ones.

We watched apprehensively as Cub #3 struggled, but it always seemed to manage some quality nursing time every day. To our relief, Cub #3 slowly began to get the knack of nursing and began to catch up to its siblings in growth and development. Though Cub #3 still fights for already occupied nipples, it seems to have developed an effective technique to win the prized teat. By sticking its paw in a sibling’s face and pushing them out of the way, Cub #3 has often avoided the unpleasant task of warming up his own nipple for nursing. 😉 Cub #3 is usually always the “last one to the party” sleeping in instead of getting up to nurse, and sometimes electing to climb over top of Mama and its siblings instead of taking its turn being groomed. From what I’ve seen, Cub #3 is its own beautiful blend of both parents.

We still aren’t certain of the cubs’ sexes because the keepers aren’t handling them unnecessarily at this time. Accurately sexing young felids can be tricky, so we don’t want to make any false reports (but I do have my guesses for each cub!). In all likeliness, the cubs will have their first round of vaccines and their first wellness checks at approximately 8 weeks of age, and we’ll be able to sex the cubs at that time as well. This should give us all something to look forward to mid-January, and maybe John can help us with the big gender reveals!! 🙂 Stay tuned and as always, thank you so much for all of your love and support! Happy Holidays from Imani, John, Cubs 1, 2, and 3 and the Africa team keepers!