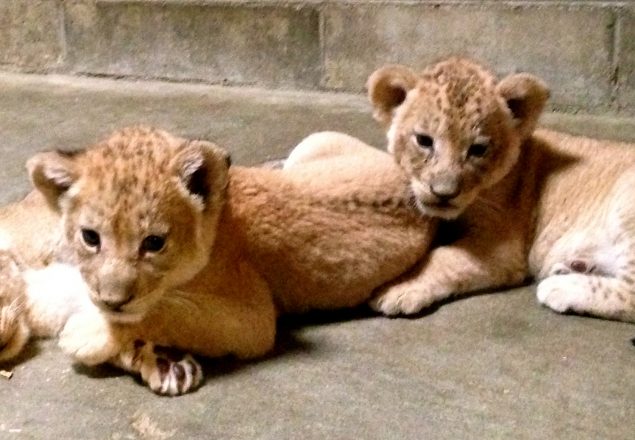 As we prepare to introduce our visitors to John and Imani’s cubs – Uma, Kya and Willa – this spring, we are also celebrating the success of our efforts to support wild lion populations. We work with the Maasai communities in Kenya’s South Rift Valley to promote the coexistence of lions, people and livestock. A partnership with SORALO (South Rift Association of Land Owners), the Rebuilding the Pride program is based out of two communal ranches, or conservancies, called Olkirimatian and Shompole.

In 2014, the lion populations on Olkirimatian and Shompole continued to grow and thrive with 16 cubs born in 2012 and 2013 surviving to adulthood. Two radio-collared lionesses that the program monitors, Nasha and Namunyak, also recently gave birth to new litters of cubs. Just like Imani, Namunyak has a trio of cubs tagging along behind her. Namunyak’s cubs have not yet been given names as it is Maasai tradition to wait until they are at least a year old.

As the lion population grows, so does the area across which they range, resulting in reports of lion sightings in new areas. In response, the Rebuilding the Pride team has added two new local Maasai resource assessors and a mobile monitoring unit. This allows the program to expand the area it covers and reach even more remote regions. The role of the mobile monitoring unit, equipped with tents, cameras and GPS, is to track lion and livestock movements, identify conflict hotspots, share this information with livestock herders and report cases of lost livestock to the rapid response team, which then addresses the situation.

In 2013, the team began developing a lion identification (ID) database, allowing for photographic documentation and identification of individual lions based on whisker spots. Much effort was put into updating and improving the ID system over the past year. To date, the team has created individual photographic IDs for 35 of the 60-70 lions, which is about half the population in the Olkirimatian and Shompole regions. Being able to recognize individual lions greatly enhances the team’s ability to gain new insight into the lion population.

Rebuilding the Pride isn’t just about increasing the number of lions, however. Improving the livelihoods of the local people is critical to promoting coexistence. In addition to building local capacity as resource assessors, the Olkirimatian Women’s Group continues to manage the Lale’enok Resource Center that serves as Rebuilding the Pride headquarters. They also sell beadwork and solar lanterns and have begun a new enterprise this year – beekeeping. Several apiaries were established and the first harvest took place in November.

These are just a few highlights from the past year. WCPO.com recently interviewed me about Rebuilding the Pride so check out the article, if you’d like to learn more.We look forward to continued development and success in 2015, and can’t wait to watch both Imani’s and Namunyak’s cubs grow over the coming year.