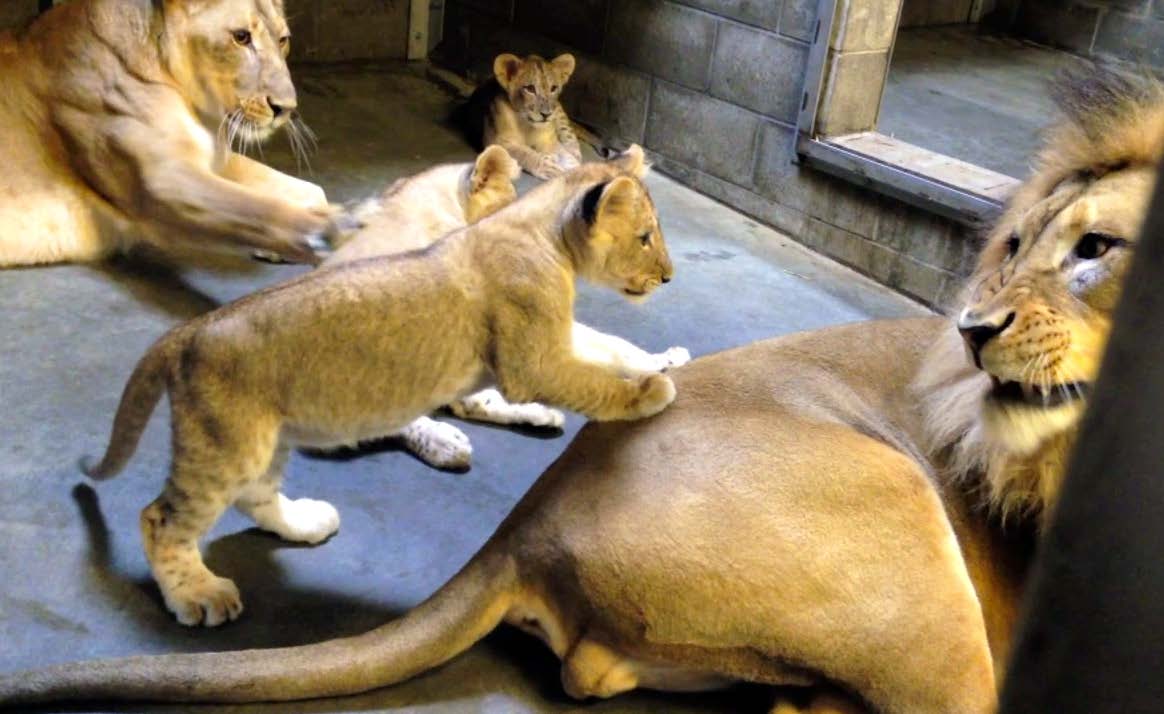 We’ve got a lot to catch up on! I imagine there is a phase of parenthood (probably sometime during the “Terrible Two’s”), where parents just stop making entries in the baby book because every moment is devoted to keeping your newly mobile and rebellious child in line. Any free time you might have (that would previously have been devoted to meticulously filling in the baby book) is now spent on precious sleep. That’s the phase Imani has been in for the last few weeks.

The cubs’ coordination, activity levels, and attitudes have grown by leaps and bounds, and the result is one very busy, very tired, and very tolerant momma lioness. Imani does her best to keep eyes on all three cubs and to intervene when the play gets too rough. She steps in if someone (usually “Willa”) is getting picked on by the other two. And she’s been spending an awful lot more time up on the high shelf: a much-appreciated respite from the cubbies who cannot yet access this secret get-away.

Like any good mother, Imani is careful to vent her parenting frustrations out on anyone other than her cubs. Just the other day I was filling a bucket with soapy water to clean and I was greeted with a snarling Imani, hissing and charging at the mesh, giving me a full dose of 270 lb. cat-breath right in the face. Upon further investigation, I noted Kya relentlessly “attacking” Imani’s back leg like it was a fresh wildebeest kill on the Serengeti. If only there were another adult lion to take some of the focus off Imani.

Though lionesses in the wild will bring their cubs back to the pride as early as six weeks, we wanted to play it safe with our first-time father John, and so keepers waited a bit longer to make sure that their first meeting would be a positive one for all involved. After several weeks of “howdy’s” (where John got to interact nose-to-nose with his cubs through a protective mesh barrier), we decided that the time was right to open the door and let John meet his little “trouble cubbies” in person.

John tentatively stepped across the threshold and all five lions were sharing the same space for the first time. The first few moments were filled with an array of fascinating and fun vocalizations from the cubs. Uma, Kya and Willa huddled together close to mother Imani and stared up at John with interest and a little fear. John pressed himself against the mesh at the front of the enclosure and looked (appropriately enough) a little terrified himself. Imani stood protectively over the cubs and kept her eyes locked on John, ready to intervene if anyone stepped out of bounds.

It didn’t take long for the cubs’ brazen curiosity to outweigh any fear, and they approached John, displaying all the proper body-language of a submissive lion. They held their heads low, and looked up at John through their eyelashes. They cocked their heads from left to right and made friendly “greeting” vocalizations. Uma (our fearless little pioneer) was the first to approach John and tentatively sniffed and licked his back leg. John swung around, mouth agape and let out a warning bark to let Uma know “That’s close enough!”, and Imani promptly lunged forward, growled and gave John a swift paw to the face.

All three cubs scattered and ducked into a separate holding while John scrambled to get away and Imani pursued him with a mother’s wrath. At the end of the minor scuffle, John was left sitting in the corner with an appropriate look of bewilderment and apprehension on his face while Imani groomed her front paw, and a small tumbleweed of John’s mane settled on the ground between them. Clearly a line had been drawn in the sand: when it comes to these cubs, if you mess with them, you’ve gotta deal with Imani!

Now anyone who works regularly with John can tell you how smart he is, so it didn’t take long for him to learn this lesson. After things had calmed down, the cubs returned to visit with John again, and this time he did his best to keep a safe distance between himself and the cubs. Not wanting to incur Imani’s wrath for a second time, John dipped, dodged, and maneuvered around the cubs, crossing into separate holdings and even jumping up on the shelf to get away from them. He was content to just share space with them and not really interact beyond staring.

Over the course of the next several days, the keepers supervised as John would have “visitation hours” with his cubs. Each day, slow and steady progress was made. John altered his tactics and tried more gentle “huffing” vocalizations and avoidance behaviors to let the cubs know that he didn’t appreciate them climbing on his back. Imani stepped in and actively pulled cubs away from John if they were getting too bold or behaving inappropriately. The visiting sessions all tend to wrap-up in the same manner with the cubs finally giving up on pursuing John and instead opting for a nice long nap on the floor. John usually lays down next to them, seemingly enjoying their company during these quieter moments as Imani looks on protectively nearby.

Historically, John has always been appropriately submissive to Imani, reading her body language with pinpoint accuracy and always giving her the space she needs. He takes her corrections and discipline in stride and never retaliates. John’s laid back and gentle nature has always given me confidence that he would be a good father. We’ve still got a little ways to go before the whole pride can be left together and unattended, but we couldn’t have asked for a better start to the process. All five lions have behaved appropriately for the first introductions, and all signs point toward a cohesive and stable pride in the future.

Meanwhile, over in Kenya where the Zoo partners on a community-based conservation program called Rebuilding the Pride, Imani’s wild counterpart, Namunyak, has her paws full with her own new trio of cubs. Born sometime in late October or early November, Namunyak’s cubs are similar in age to Uma, Willa and Kya. And it appears that Namunyak and her cubs have returned to their pride right around the same time we introduced ours to John. Last week, following a much needed rainstorm, Namunyak and her cubs were spotted on a wildebeest kill, having rejoined their pride for the first time. Namunyak’s older set of cubs and another lioness, Ngiso, and her cubs were there as well. A total of 11 lions were counted in all. All the cubs were looking in much better condition than the last time they were photographed. With plenty of wildebeest calves around and more rain right around the corner, life for the lions as well as the Maasai and their cattle is looking up.

We are counting down the days until the warm weather of spring when we can finally share our pride with you all in person. Until then, we’ll continue to do our best to share pics, video, and blog posts with all of the lions’ adoring fans. As always, thank you so very much for your love and support! We’ll see you this spring!