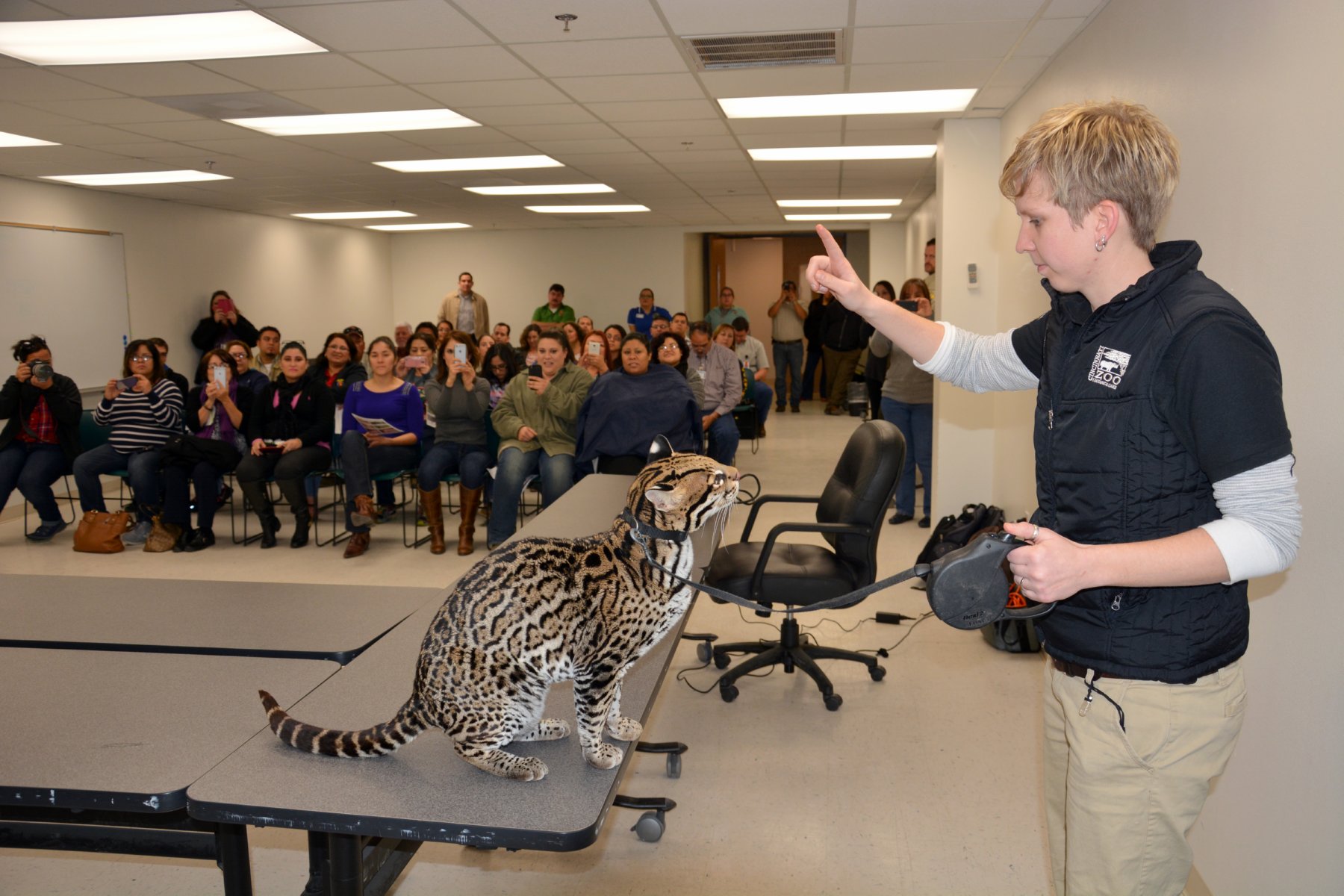 Last week, the Zoo’s Cat Ambassador Program and their ambassador ocelot, Sihil (pronounced C-L), traveled to Texas for the annual Ocelot Conservation Festival. Hosted by the the U.S. Fish and Wildlife Service (FWS), the Friends of Laguna Atascosa National Wildlife Refuge and the Gladys Porter Zoo, the Festival raises awareness about the endangered Texas ocelot and appeals to those who share their space with these pint-sized predators to protect them.

Did you know that ocelots still range up into the United States? Biologists estimate there are about 80 remaining and they live only in the southern tip of Texas. They are federally listed as endangered in the United States and the U.S. Fish and Wildlife Service and partners work to protect them. Learn more from this infographic we created on saving the Texas ocelot:

This is the eighth year in row that Sihil and her trainers have participated in the Festival, and the second year that I’ve accompanied them. It’s a long drive to and from Brownsville, Texas, but Sihil is an old pro at traveling. She enjoys watching the landscape and other cars go by out the windows of the van, and she especially cherishes the one-on-one attention and extra treats and toys she receives from her trainers on the trip. The rest of the time, she sleeps like a typical cat would.

Over the two days we spent in Texas, we kept busy. The first order of business was a 6:00AM television appearance on the local Channel 4 news to highlight the Festival. Next up was an appearance at a seminar held at the University of Texas Pan American . This event featured several speakers who addressed ocelots and the issues they face. Dr. Michael Tewes, Regents Professor and Research Scientist at Texas A & M, discussed his work with ocelots in Willacy County. The Texas Department of Transportation discussed transportation issues and the importance of wildlife crossings. Dr. Hilary Swarts, U.S. Fish & Wildlife Biologist, discussed the status of and issues facing ocelots in Cameron County. Following the speakers, Sihil strutted her stuff for an audience of about 125 while her trainers, Alicia Sampson and Colleen Nissen, shared information.

After lunch (and a nap for Sihil), our next appearance was at the Cameron County Commissioner’s Office. Nearly 60 government employees learned about Texas ocelots and were treated to what was a first glimpse for most of a live ocelot when Sihil jumped up on the table in front of them. Since they are so rare in the wild, most South Texans have never seen a live ocelot up close and in person before.

That evening the Friends of Laguna Atascosa National Wildlife Refuge held its annual Ocelot Soiree fundraiser. Activities included live music, ocelot-themed appetizers, drinks, a live auction of ocelot-inspired art, a presentation by the U.S. Fish and Wildlife Service, and of course, an appearance by Sihil.

The next day was the official Ocelot Conservation Day, which kicked off with Ocelot 5K and 1K Runs. Many of the 600 runners really got into the ocelot spirit with the way they dressed.

The finish line brought the runners into the Glady Porter Zoo’s South Texas Discovery Center where the Ocelot Conservation Festival was held. Each runner received a very cool ocelot medal as a badge of their accomplishment and support for ocelots.

From 10:00AM to 4:00PM, more than 1,300 people stopped by the Festival, which featured information tables, fun activities and the chance to watch Sihil show off her climbing skills. Needless to say, she was a big hit and generated a lot of great questions from the audience.

So what is the current status of ocelots in Texas? Are we having an impact? Can the population survive? With the discovery of two young ocelots on the Laguna Atascosa Wildlife Refuge earlier this year, biologists are optimistic. We know the population is breeding. This summer, the Texas Department of Transportation will begin construction on 13 new wildlife crossings on roads where ocelots have been struck and killed in recent years. This is great news and should cut down on road mortality, the number one threat to the current Texas population. As U.S. Fish and Wildlife continues to protect and restore thorn scrub habitat required for ocelots, it is hoped that the current population can continue to expand. There is also a plan in the works to translocate an ocelot from Mexico to Texas in the future, which would bring much needed genetic diversity to our population.

What can we do to help save Texas ocelots here in Cincinnati? Come join the American Association of Zoo Keepers (AAZK) Greater Cincinnati Chapter in celebrating and raising funds for ocelots at our first Cinco de Gato event!  Held at Barrio in Northside on May 8, a portion of the proceeds from food and beverage sales along with funds raised from raffle items and merchandise will go to the Friends of Laguna Atascosa National Wildlife Refuge to support ocelot conservation. Mark your calendar and look for more details to come later! 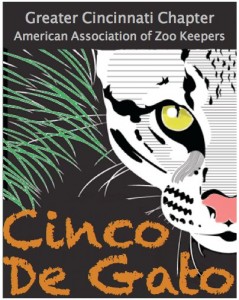