I’ve put off writing this blog for a long time because I knew it would be a challenge. Early on, telling the cubs apart was much easier. Willa (the smallest of the bunch by far) had 4 very distinctive markings along her lower back. Uma was the largest and also the lightest in color. Kya was easy to distinguish because she matched Uma in size, but was much darker in color. Additionally, their vastly different personalities paired with whatever they were doing in the moment helped us to determine which cub we were looking at most of the time. 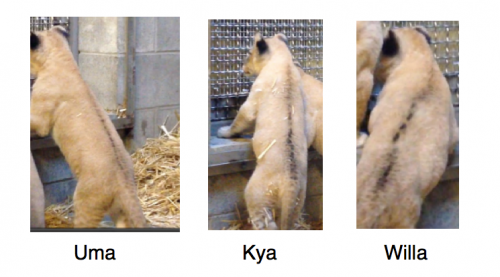 But as the cubs grew, their size differences began to diminish as Willa (our runt) caught up to her sisters. Additionally, the dark markings (which help to camouflage the cubbies as they hide from predators) began to blend together or fade. All three cubs’ coats took on very similar appearances. And I began to feel a little bit panicky about accurately identifying each cub. What kind of lion keeper can’t tell her lions apart? Honestly. Maybe I should just fill out my own pink slip to save myself some of the embarrassment.

Each day, I watched the cubs closely and took photos from every angle. I edited the pictures like a crazy person… zooming and cropping, changing the shading and the contrast, always looking for some clearly distinguishing features I could share with all of you. I would cheer for joy when I thought I’d nailed down an identifier but was quickly dejected when I realized that the same feature was actually present on another cub as well. Sometimes a new marking would appear (on the bridge of the nose for example), and it would turn out to be a wet spot that would dry and disappear. This was proving to be a very difficult task.

Fortunately, Willa stands apart from her sisters in a couple of real, but not-so-obvious ways. I can always seem to pick Willa out of the crowd because of her eyes. There is something very unique and distinctive about her eyes that is very different from her sisters’. They have an apprehensive, almost forlorn quality to them (a characteristic all too familiar from looking at John for the last few years).

Additionally, Willa has maintained her slightly darker coat color, and her cautious personality has persisted into her adolescence. If someone’s hanging back and staying close to Mom or Dad, it’s probably Willa. If someone’s over-reacting about a perceived threat (like a feather duster), it’s probably Willa. By pairing her personality with her very distinguishing eyes, Willa is easily the least challenging to identify.

But Uma and Kya are a different story. At one point, I even considered the possibility that Uma and Kya might be identical twins. That theory alleviated some of the feelings of inadequacy I was experiencing, but didn’t solve my problem. I still had 2 cubs that were VERY difficult to tell apart, and I had to figure it out soon before their few distinguishing features disappeared completely.

Fortunately for me, someone much smarter than myself figured out a long time ago that lions can be identified by their entirely unique whisker patterns. Just like our fingerprints (which are completely unique to us), a lion’s whisker pattern is completely unique to that lion and will never change over the course of its lifetime. In fact, this is the method utilized by researchers to identify different wild lions (especially with camera trap images). You can learn more about how wild lions are identified here.

So all that’s left to do is analyze some high-quality images of our girls and determine the unique whisker patterns of each. The picture of Uma shown below is a good example. The whisker spots on the right side of her face are clearly visible, and we can see 2 distinct whisker spots in the top row (or the identification row). When compared with the second row of whiskers (or the “reference row”), we see that the two whisker spots on top row line up almost perfectly with the 3rd and 4th whisker spots on the second row, forming a little square. This is unique to Uma and will serve as a full-proof method of identification for the rest of her life. 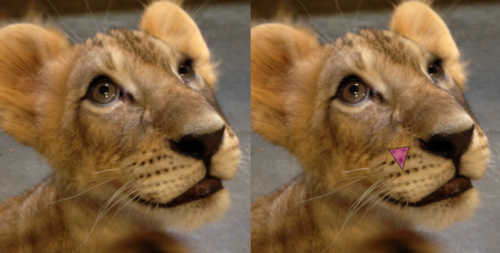 So how will this help you to identify the cubs when they are out on exhibit this spring? It probably won’t. 🙁 Unless they are laying right up against the glass viewing and they aren’t moving and the whiskers on the right side of their face are clearly visible. Then you should be able to figure out which cub you’re looking at. 🙂 But what’s more likely to happen is that as the cubs get older, they’ll grow and change and develop. Together, we’ll learn their personalities and their tendencies. And maybe with all the roughhousing and play-fighting, someone might even end up with a tell-tale scar on their nose or cheek. 😉 Hopefully, at some point, they will become very clearly distinguishable for everyone, but until then, we’ll just have to keep tabs and count whiskers.

Want to practice your whisker identification skills? Try comparing Uma’s and Kya’s left sides! What do you see? Which whisker spots are unique? Keep practicing and in just a couple short weeks, you can try your hand at identifying the cubs live and in person as they go on exhibit at the Cincinnati Zoo!

6 thoughts on “Lion Keeper’s Blog: Who’s Who? How to Tell the Cubs Apart”