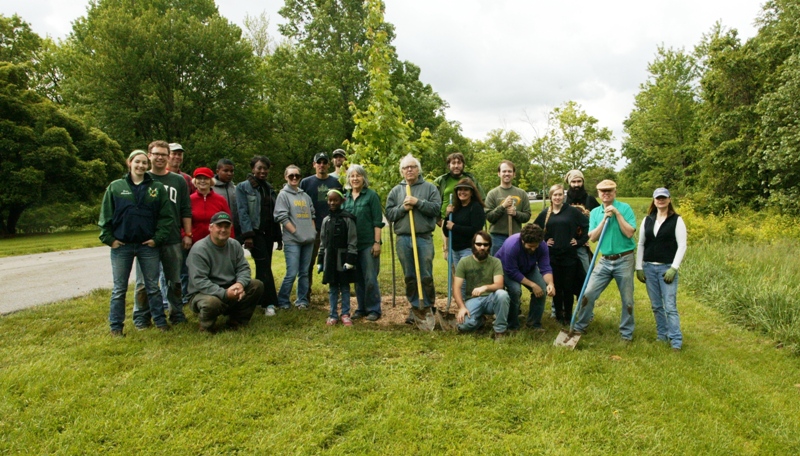 Growing up, my favorite place to escape was among the weeping branches of a willow that stood in the far corner of our yard. I spent hours climbing that tree, watching the ants march up and down its wrinkled bark and making crowns of its leafy branches. Still now when I return to my childhood home for a visit, I always stop by to say hello to my old friend.

In our everyday lives, we generally pay little attention to the trees that grow beside us, providing the oxygen we breathe, cleaning the water we drink and shading the homes in which we live. And when we think about deforestation and the need to protect and plant trees, we usually picture far away tropical jungles. But right here in Cincinnati, we live in the middle of what used to be one of the world’s great forests, the Eastern woodlands.

When Ohio became a state in 1803, more than 95% of its land was covered with forest teeming with wildlife including black bears, wolves and bison. As settlers moved in, they cut down forests to farm. Less than 10% of Ohio remained forested by the early 1900s. Gradually, people became concerned about protecting the environment and forests began to reclaim some of the land. Today, more than 30% of Ohio is forested and wildlife populations are the healthiest they’ve been in the last century. Many species, such as the deer and turkey, have recovered fully, while others are well along the path to success, including the river otter and bald eagle.

With exotic insects like the emerald ash borer sweeping through the region killing trees, invasive plants like bush honeysuckle choking out native species and ongoing destruction and fragmentation of woodlands, there is still much recovery work to be done, and the Taking Root campaign is asking us all to get involved.

Chaired by our one of our own horticulturists, Scott Beuerlein, Taking Root is a collaboration between the Cincinnati Zoo & Botanical Garden, the Ohio Kentucky Indiana Regional Council of Governments, the Green Partnership for a Greater Cincinnati and the Green Umbrella along with many other great organizations. Founded in 2013, the campaign’s goal is to plant 2 million trees by 2020 – that’s one tree for every person in the tri-state region.

More than 83,945 trees have been planted and registered with Taking Root so far.

You can help get the numbers up by planting trees in your yard or joining a tree planting event – check the website for a calendar of events.

2) Make a video of yourself challenging friends, family, or colleagues to do the same. Check out Zoo Director Thane Maynard’s video.

You can also nominate a special tree in the tri-state region to be listed on the Zoo’s website as a Tree of Merit. Here at the Zoo, we have a particularly special red oak, Quercus rubra, that was likely here before the Zoo was even established. At more than 130 years old, it is quite impressive. It grows in the central lawn area between Swan Lake and the Reptile House. Next time you’re at the Zoo, be sure to stop by and marvel at this beautiful elder. Imagine all that has changed around it during its lifetime!