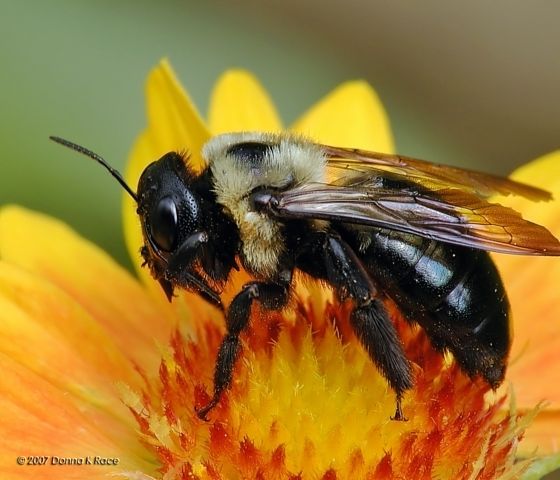 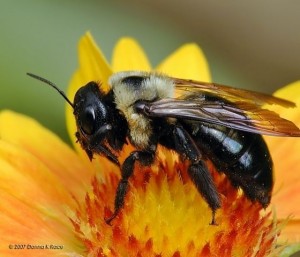 Spring has sprung at the Cincinnati Zoo, and so have the Carpenter Bees! However, the Zoo’s Curator of Invertebrates, Winton Ray, has some comforting news for you. It’s time to stop fearing the bee. At least the Eastern Carpenter Bee!

The Eastern Carpenter Bee (Xylacopa viginica) is the large, yellow and black flying insect frequently encountered on Zoo grounds at this time of year. Though they are often mistaken for Bumblebees they can be most easily differentiated from them by their black, hairless abdomens; Bumblebees have fuzzy abdomens. Carpenter Bees were so named because the females excavate nest tunnels in wood. They only nest in the wood, they do not eat it. And while nesting bees can sometimes damage wooden structures the damage associated with them is sometimes caused by woodpeckers working to excavate the bees themselves for food.

Carpenter Bees are among the first insects observed in spring. The Carpenter Bees Zoo guests are generally encountering are males. Male Carpenter Bees can be easily distinguished from females by the white or gold patch between their eyes. Each male stakes out a territory in the vicinity of a nesting female awaiting the opportunity to breed. Any other males entering the territory will be chased away and just about anything will be investigated. It’s these investigative flights that bring them into close proximity with you, the innocent bystander zoo guests. Carpenter Bees are large and fast flying so it’s easy to see why people mistake their curiosity for aggression even though they’re essentially harmless. Male Carpenter Bees, like all male bees or wasps cannot sting. Let me repeat that: they cannot sting! The stinger is a modified ovipositor (egg laying organ). Female Carpenter Bees are capable of stinging but rarely do. They spend most of their time visiting flowers or in their underground nest tunnels.

In a few weeks the Carpenter Bees we’re seeing will be gone but in the tunnels they’ve created their offspring will live on. In late summer young Carpenter Bees will emerge to feed on nectar in preparation for a long winter hibernation. They’ll generally hibernate in the same tunnels their ancestors survived previous winters in. Carpenter Bees on Zoo grounds are going about their lives the way they have for countless millennia, they’re just doing it at the Zoo instead of in an Eastern forest.

So, good news for your next Zoo visit! Carpenter Bees pose essentially no danger to us. You’re actually more likely to be injured trying to swat or flee from Carpenter Bees than by the bees themselves. Next time you see a Carpenter Bee, you can let your friends know, there’s really nothing to fear!

5 thoughts on “No Need To Fear The Carpenter Bees!”