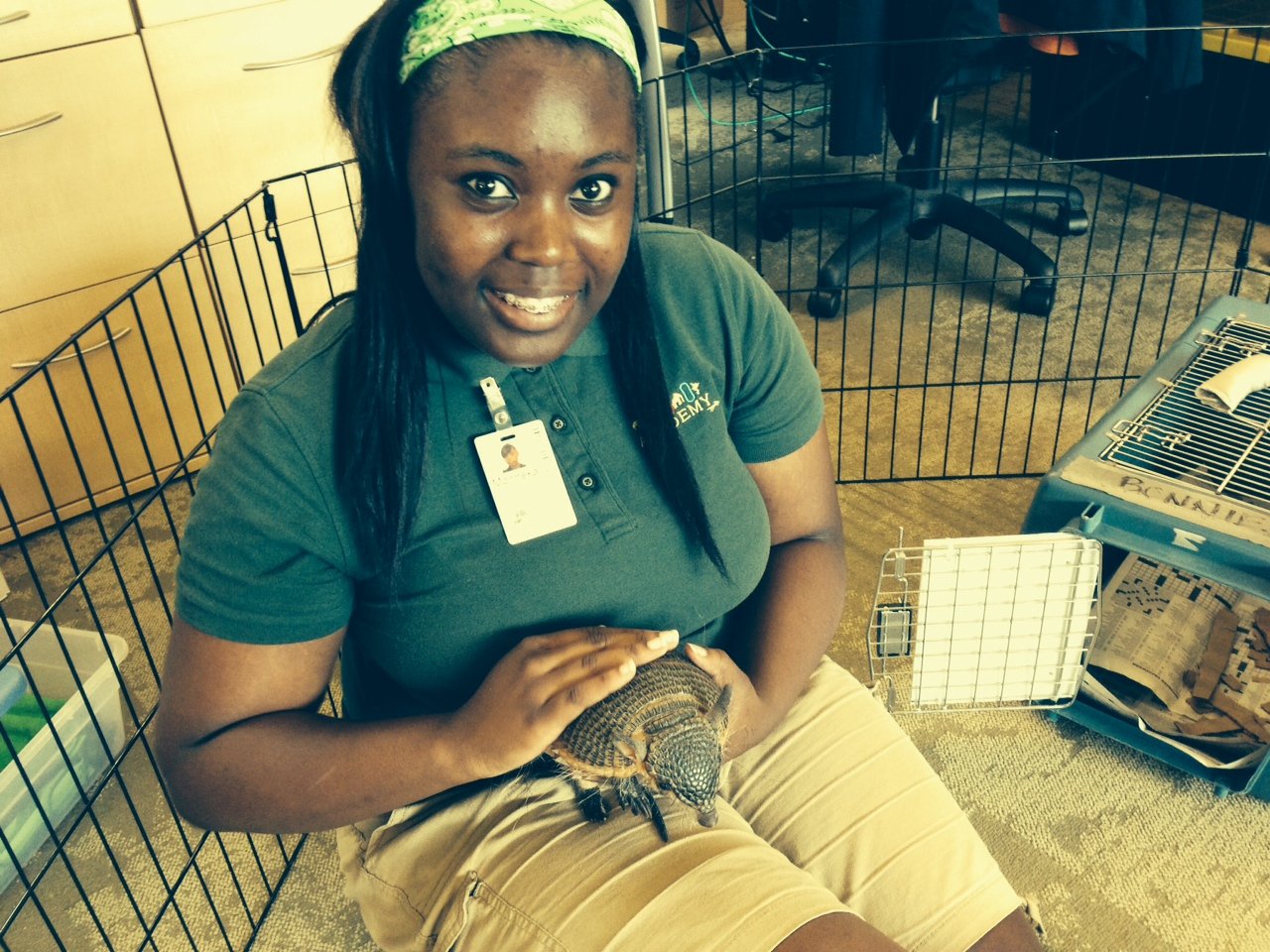 If you follow the Zoo blog, you’ve likely read posts written by some of current Zoo Academy students and are somewhat familiar with the program. This year, we are celebrating a milestone as the 40th class of Zoo Academy graduates prepares to walk across the Cintas Center stage and receive their diplomas on May 24.

The Cincinnati Zoo Academy has been a part of the public school system in Cincinnati since 1975. In 1995, the program underwent a substantial change from a strictly vocational program with an emphasis on natural resources and wildlife management to a four year college preparatory program where the students earn vocational degrees by working with zookeepers for two hours a day. During the 2008 – 2009 school year, we became a Tech Prep program with articulation agreements with UC Blue Ash and Cincinnati State. Students spend their ninth and tenth grade years at Hughes High School. During their eleventh and twelfth grade years, home base for the Zoo Academy is located on the first floor of the Education Center on Zoo grounds. The students spend several hours a day working alongside keepers, educators and other staff in labs throughout the Zoo.

This year’s graduates follow in the footsteps of an esteemed group of alumni. Many graduates have gone on to establish careers in environmental or zoological fields and some have actually been hired on as staff here at the Zoo, including Rickey Kinley, who has worked at the Zoo for 22 years and is currently a keeper in the aviculture department. Here Rickey shares his story in his own words:

“I started my life as an underprivileged kid. We were very poor.  I can remember being fascinated by nature and animals as far back as when I was three years old watching a ladybug on my window sill. At about the third grade, I had the epiphany that books held the information about the animals that I was so interested in. I became a bookworm, but only with books about animals. This curiosity developed further on to my teenage years when a freshman year science teacher mentioned to me about a high school called the Zoo School. As a teenager, this school seemed too good to be true. I applied, was accepted, and started school at the beginning of my junior year.

It was quite amazing to see on a daily basis all of the Cincinnati Zoo All-stars:  Cathryn Hilker (founder of Cat Ambassador Program), Mike Dulaney (current Curator of Mammals), Milan Busching (former insect keeper), and of course, Thane Maynard (current Zoo Director). These were people that I had regularly seen and idolized on the TV show “Zoo Zoo Zoo.”  Every single day I felt like I needed to pinch myself to make sure that it was a real high school.

Like every teenager, I was never quite sure what, when, or where life would take me or what decisions I should be making. The Zoo School gave me focus, direction, and mentoring. My very first lab rotation was in Wildlife Canyon with folks like Randy Pairan (current keeper) who taught me about the babirusa named Oscar that was more like a dog than a pig. During the Cat House lab, I was allowed to ride in the vet van next to an anesthetized lion on the way to the vet hospital for a root canal.

In the Bird House, Casey Nastold (former keeper) taught me how to hand-feed a variety of parrots, including baby macaws, eclectus parrots, African grey parrots, cockatoos, and the list goes on. Way back in 1992, the Bird House used to remove the eggshells from each egg before we smashed them for diets. I mentioned to Casey one day how in one of my books I read that many bird breeders smash the eggs with the shell on to provide grit and calcium for the birds. Casey decided that it made sense, the change was made and that is how we do our eggs still to this day. Looking back it still amazes me that she, in her managerial position, listened to the idea of a teenager.  It was extraordinary that she judged the concept on the merit of the idea and not from whose mouth it came.

I met Mary Abbott (current keeper) during my rotation in the Children’s Zoo.  In this department lived a turkey vulture named Greta that only liked Mary. Actually, she only liked women.  Any woman could pick this bird up like a baby, but men were never treated so kindly. Even though Greta was partial to women in general, I could tell that this vulture was a great judge of character because Mary was one of the nicest people I met as a student.

I want to help others understand how great of an impact that a program like this can have on a person.  Two things seemed impossible to me as a youngster with few opportunities:  1) to one day become a zookeeper and 2) to own my own business.  I have now been at the Zoo for 22 years and I have been a business owner for 13 years.”

Learn more about the Zoo Academy and hear inspiring stories from other graduates here.