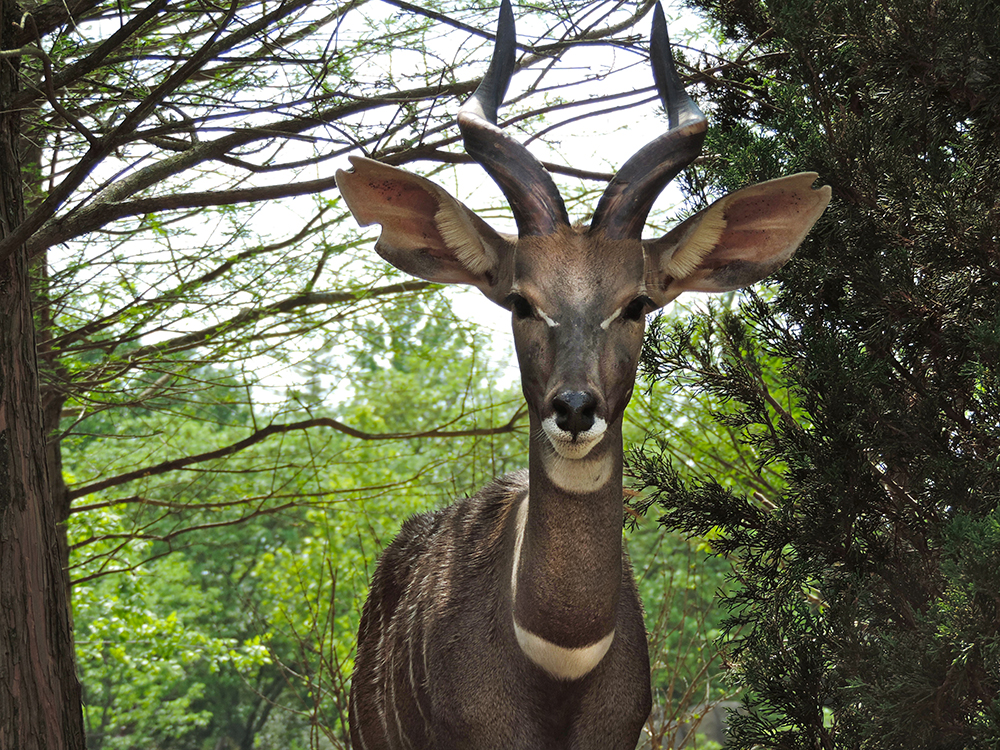 It is easy to be distracted by our thirteen new (and adorable) babies in the Africa exhibit, but don’t forget to check out the awesome antelope and birds living in our savannah area! They are all interesting in their own way and below you can find more information and helpful hints on how to identify each one.

Lesser Kudu are a grayish-blue colored antelope with large ears and white stripes going down their sides.   Females do not have horns and are a reddish color.  They are wonderful at blending in with their surroundings and prefer bushy scrubland areas where they stand really still to hide from predators when necessary. They are most active at night, making them nocturnal. They can run up to 60 miles per hour. Male Lesser Kudu are typically solitary, while females will live in small groups of 2 to 3 or with their calves.

Our kudu, Calvin and Hobbes, are often toward the back of the exhibit behind the foliage. Even though they spend parts of their day hiding, they are our most tractable hoofstock and will greet their keepers in hopes of getting yummy treats. Hobbes tends to be the braver and the first to approach his keepers, however he is a pickier eater and will sometimes spit out treats that he is offered. They have physical characteristics that help visitors tell them apart. Calvin is larger, weighing around 155 lbs, with longer eyes stripes and an ear notch in the middle of his left ear between his face and the tip of his ear. Hobbes weighs around 135 lbs, has shorter eye stripes and has an ear notch at the very tip of his left ear.

Impala are one of the more familiar antelope to most zoo visitors. The males have large horns and beautiful, fawn colored bodies. Females do not grow horns. They are incredible jumpers and can leap about ten feet high and thirty feet in distance in a single bound. In the wild they are typically found in the savannah with short grasses and a water source nearby. Impala adjust their diets according to what is available and therefore are both grazers and browsers.

Our impala came to us with very shy personalities and are slowly, but surely, warming up to us. We have two males, as you can tell by their horns, named Hofu and Ndizi. They can be  difficult to tell apart from far away, but Hofu is a little bit smaller than Ndizi, and Ndizi has black on the inside border of his ears. Out of all of our antelope in the exhibit, the impala are the most likely to be near the moat when the pelicans allow.

Habitat: Found in savannas, areas of short grass with medium, or dense stands of bush and a permanent water supply

Thompson’s gazelle are the most abundant species of gazelle on the African savannah.  Both males and females possess horns, unlike the kudu and impala.  They live in small herds, but are flexible socially and will merge with other herds, especially females.  They have scent glands below their eyes and if you have time to watch them for a while you may see them mark the bushes or browse in the exhibit with a black secretion from those glands.  Males will use this scent to mark their territory. If necessary, Thompson’s gazelle will travel ten miles or more to find water.

We have three male Thompson’s gazelle (aka Tommys). Both males and females of this species have horns. They are the smallest antelope in our exhibit and a lot of the time visitors assume that they are babies. All of our males are young, but they are full grown. They may get a little more muscular and their horns may continue to grow, but overall they will not get much larger. Jared and Farley are new to us this summer. Jared, our largest gazelle, has a crooked and broken horn. It is most likely the result of a fight with another gazelle when he was younger and his horn grew in at an odd angle with the tip missing. Farley is the smallest, with a noticeably smaller tail and horns that form a “Y” or “V”.  Jasiri came to us with the two impala and has been out on exhibit since last year.  His horns are very close together like an “11”. Despite the fact that he is one of the smallest, he tends to be one of the biggest trouble makers.

**You may see all of our antelope species sparring (hitting their heads and horns together) a lot this season. They are still figuring out who is boss, sometimes having fun, and most often doing what they would naturally do during the spring-which is try to win the rights to breed with females and protect their territory.

You can tell the difference between male and female ostrich by the color of their feathers. Males will actually help incubate the eggs throughout the night, so they are black in color to camouflage from predators in the dark. Females are lighter in color and more of grey color to camouflage while incubating the eggs during the day. Ostrich lay the largest eggs in the world and can lay up to eleven of them at a time. They are very heavy birds and, therefore,  cannot fly. Instead, they get around using a powerful forward kick (they cannot kick backwards) and can run up to 40 mph on just two toes!

If you check out the color of our two ostrich you will notice that they are not black, because we have two females-Pam and Rose.  They are a favorite among visitors and keepers.  Pam is a little bit smaller than Rose weighing in at 237 lbs. Rose is a very large female weighing in at 307 lbs! One of our keepers, Dan, is currently training our ostriches to stand still for a blood draw. Rose has already successfully gone through a blood draw procedure, and Pam is participating in the procedure as well, especially because it means she gets her favorite treat-duck food (a nutritionally complete diet made for waterfowl)! It is very helpful for keepers to have animals trained to participate in their own health care.

Crowned cranes are interesting looking birds. They have long, thin, golden feathers on top of their heads that give the illusion of wearing a crown.  They will typically live in pairs, but sometimes can be found in large flocks. A breeding pair will lay two to three eggs and then raise the family together for about a year, before they young go off on their own.  They have excellent vision and with their long necks and legs can spot predators from far away. Crowned cranes are the only cranes that can perch in trees, thanks to a very well developed hind toe!

Kahawia and Kijani, our two male cranes, are difficult to distinguish unless you can see their ankle bands. Kahawia’s is brown and Kijani’s is green. They will often approach keepers and take up a little bit too much of our personal space, especially during breeding season. One of their favorite things is when we toss them live crickets and mealworms. They spend a lot of their day looking through the grass for insects and other yummy things to eat. It is fun to see them lying down and getting comfy in the hay that we feed our antelope.

Lifespan: Up to 25 years

Pink-backed Pelicans can hold up to two gallons of water in their throat pouch at once! They have a hook at the end of their beak to help them grip fish that they scoop up out of the water. They are the smallest of all pelican species and have pink on their backs and rumps that can only be seen when their wings are out.  They breed all year round and can be found nesting in small groups or large colonies of between 20 and 500 pairs!

The Cincinnati Zoo has two males that live in our African Savannah exhibit, where you can typically find them defending their territory along the water’s edge.  Our boys are named Skipper and Gilligan. Skipper has a yellow bracelet on his right leg to help us identify him.  Their favorite fish food is herring.  Even though they typically eat fish, insects, and small amphibians, they have occasionally been spotted catching birds that make the unfortunate decision to sit along the moat!  Next time you visit, check out their fun, cartoonish-looking eyes and enjoy their graceful movements through the water that make them appear to be ice skating.

Lappet-faced vultures are the largest vulture found in Africa and have the ability to strip the carcass of a small antelope to the bone within 20 minutes!  They have brown feathers and bald heads that can turn red. Just like other vultures they typically eat carrion (dead animals), but uniquely, they sometimes also hunt small mammals and birds!  Smaller scavengers depend on Lappet-faced vultures to break through the tough hides of bigger carcasses. Lappet-faced vultures will even eat the skin and bone of a carcass, which is not typical for other raptors.  They will even stand up to a jackal if it tries to steal their carcass!

We currently have two Lappet-faced vultures, Ogra and Ishtar. Ogra is a female and you can tell her apart from Ishtar because she is bigger and has very few white feathers on her back.  Naturally (being female and all), Ogra is the boss out of our three vultures and chooses to steal the others food rather than eating from the perfectly good plate laid down for her.  Ishtar is male, smaller, and his back is speckled with white feathers. You will often see them with their wings stretched out soaking up the sun.

Ruppell’s vultures are able to soar for over 6 hours at high altitudes thanks to their 7.5 to 8.5 foot wingspan.  They can fly over 3 miles in six minutes and will fly as far as 90 miles from their nest in search of food. They have a ring of feathers that goes around the base of their necks and small, white fluffy feathers covering their heads.   The rest of their body is covered in mottled brown and white feathers, with white fluffy feathers on his legs.  Pairs will mate for life and will join large flocks of up to 1,000 breeding pairs.  The females collect sticks and grasses and the males will help build the nests, as well as incubate and feed the chicks.

Bubba is our Ruppell’s vulture and my personal favorite bird of the bunch.  He is very inquisitive and loves to get into trouble. As a highly social species, Bubba enjoys the company of Ogra and Ishtar very much, but the love is not necessarily reciprocated.  He tags along wherever they go and entertains himself by playing with branches and browse that he finds in the yard.  If you do not see him hanging out with Ogra and Ishtar, chances are you can find him on the island in the moat. He spent most of his summer last year perched up on the log found on the island, but he now prefers to be wherever his new buddies are.

quickly due to habitat loss, hunting for trade, as well as the carcasses that they feed on are being poisoned by poachers and farmers. Poachers do not want to be tracked down by rangers after they have killed a large mammal and vultures are a good indicator of where the carcasses can be found, so by poisoning the dead carcass, fewer vultures will come and they have a better chance of getting away. Farmers will sometimes poison large predators such as painted dogs and lions, because they do not want them to kill their livestock, and this is killing vultures by the thousands.

11 thoughts on “African Savannah Line Up – Who’s Who?”