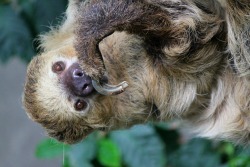 Do you know Moe? You should! She is the star of the Discovery Forest exhibit in our Education Center. As a two-toed sloth, Moe spends her days hanging out in her favorite tree. While she does rest a lot (she is a sloth, after all), Moe can be quite active at times and she is very curious.

Moe has become a favorite with the thousands of kids and families that participate in Education programs and camps. You can’t come and go to Summer Camp without passing by to say hello and good-bye to Moe. At the end of the day, Moe climbs down a special ladder made just for her into the arms of one of her keepers, who carries her to a behind-the-scenes suite for the night.

These days, Moe is doing more with her celebrity status beyond inspiring our guests. She and her keepers are helping to save sloths in the wild. Between April and October, guests can schedule a private, up close 30-minute encounter with Moe and her keepers. A portion of the proceeds from the ‘Moe’mentous Sloth Encounter support The Sloth Institute Costa Rica (TSI) and its mission to ensure a peaceful coexistence between sloths and people.

The Sloth Institute (TSI) was established in August of 2014 by Sam Trull and Seda Sejud to enhance the well being of captive and wild sloths through research and education.

In collaboration with Kids Saving the Rainforest (KSTR), TSI helps to rescue, rehabilitate and release the sloths of Manuel Antonio, Costa Rica. In the area near Manuel Antonio National Park, one of Costa Rica’s smallest yet most popular tourist destinations, roads and development have fragmented the natural forest habitat, increasing the threats to the very wildlife people come to see. The most common injuries to sloths are electrocutions from touching electrical wires and orphans separated from their mothers. Sloths are also vulnerable to vehicle strikes and dog attacks when they descend from the trees. In addition, TSI helps KSTR hand-rear baby sloths that are orphaned because the mother abandoned them or the mother was injured or killed. Sloths can be very difficult to raise due to their sensitivity to infection and incomplete information on what wild sloths need to survive.

When possible, the goal is to rehabilitate and release the sloths that are healthy and capable enough to survive and thrive again in the wild. In order to monitor each individual’s success post release, TSI plans to fit each sloth with a tracking device that will allow them to be monitored post-release and contribute to knowledge about sloth ecology and how to successfully raise and release orphaned and injured sloths.

TSI is beginning its first release project of 2 two-toed and 2 three-toed sloths. The release process involves selecting and obtaining permits for an appropriate forested area for the release that is safe from development, electric wires and cars. Once a site is secured, the sloths will be transferred from the KSTR rescue center to a soft-release enclosure in the forest to let them get used to their new environment. During this time, TSI will provide leaves from the forest to get the sloths more used to the diet found at the release site while still supplementing them with captive food. After about a month, TSI will open the door, allowing the sloths access to the surrounding forest. They will be able to choose when to explore the outside world. This “soft release” gives the sloths as much time as they need to get used to their new environment and learn how to find food before going off completely on their own, which is the most appropriate method for hand-raised orphans that require a lot of maternal investment.

With funding from the Cincinnati Zoo, TSI was able to purchase four of the VHF tracking collars for this project. Fitted with the collars, the sloths can be tracked around the clock to collect behavioral data, locational data and health status information.  Simultaneously, TSI will also track wild sloths for comparison and to provide parameters for evaluating the success of the release.

Furthermore, TSI will also start a long-term field station for studying wild sloths in Manuel Antonio. They hope to learn more about sloth ecology in this region of Costa Rica, including information on diets, home range, carrying capacity, health status and social structure.

Keep up with the latest happenings at TSI through its Sloth Diaries blog, and consider supporting sloths in the wild by booking your own Sloth Encounter at the Zoo. And next time you’re at the Zoo, be sure to stop into the Education Center to say hello to Moe.

4 thoughts on “Moe, the Two-toed Sloth, and Her Keepers Help Save Sloths in Costa Rica”