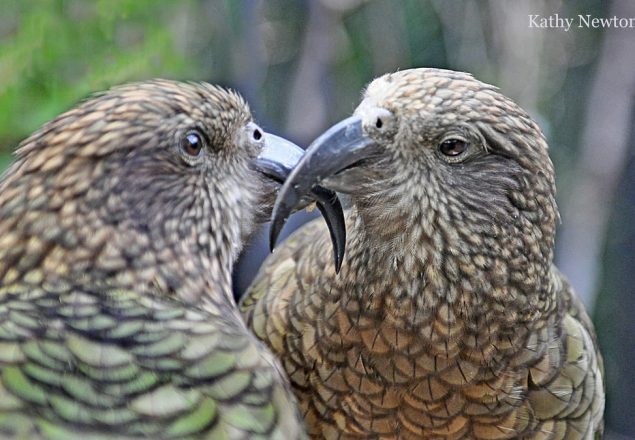 The Zoo supports the conservation of kea, the world’s only alpine parrot species, in New Zealand through the efforts of the Kea Conservation Trust (KCT). Fewer than 5,000 kea remain and face threats such as conflict with people, loss of habitat, lead poisoning, predation by introduced invasive species such as stoats, brush-tailed possums, cats and rats, and unintentional by-kill by poisons used to control these invasive species.

One strategy of the KCT to conserve kea in their natural environment involves the protection of nesting sites. During the past breeding season (July 2014 to January 2015), video trail cameras were used to monitor nest sites and document breeding activity and conflict events.

A total of 33 female keas were monitored over five research sites, resulting in five successful nests producing 12 chicks, which is more than were documented in previous years.

Once active nest sites were identified, cameras were placed at the entrance to monitor breeding activity, predator visitation and chick development. A series of predator control traps were also deployed around the nesting areas to help protect the birds until the chicks fledged. The cameras documented several nests being visited by predators. KCT used this information to extend trapping systems, resulting in decreased predator visitation.

The cameras also provided valuable information on kea survivorship and repellent effectiveness during the New Zealand Department of Conservation’s (NZ DOC) scheduled 1080 poison drops in the Kahurangi National Park. In 2014, New Zealand experienced an intensive mast (seeding) event which resulted in a significant increase in numbers of mice, rats and stoats. A previous major mast in 2002-2003 appears to have been the cause of an 80% decline in kea numbers at Nelson Lakes. Current population numbers could not sustain another such event, making the widespread use of 1080 poison necessary. The kea’s inquisitive nature makes them more likely than other native avian species to investigate the poison baits, so the use of chemical kea repellents in the 1080 baits is being studied to reduce unintentional by-kill. Unfortunately Ceejay, one of the most productive females in the area, was found dead after ingesting 1080 poison.

The cameras also proved useful in March 2015, when keas were blamed for damaging bicycles and other property in a residential area. Cameras set up in the area were able to capture noisy nighttime activity (which was attributed to kea) generated by at least two possums and three cats on multiple occasions. One possum was actually caught on camera damaging property. The cameras helped defuse conflict between community members and the kea by allowing the KCT to accurately document conflict events.

Video trail cameras have provided the KCT with an incredible amount of valuable data which has been used to protect kea nesting sites and mitigate several human-kea conflict situations. The cameras also significantly reduced the amount of hours necessary for personnel to spend in the field collecting data, allowing the saved resources to be used in other conservation projects.

One thought on “Using Cameras to Protect Keas in the Wild”