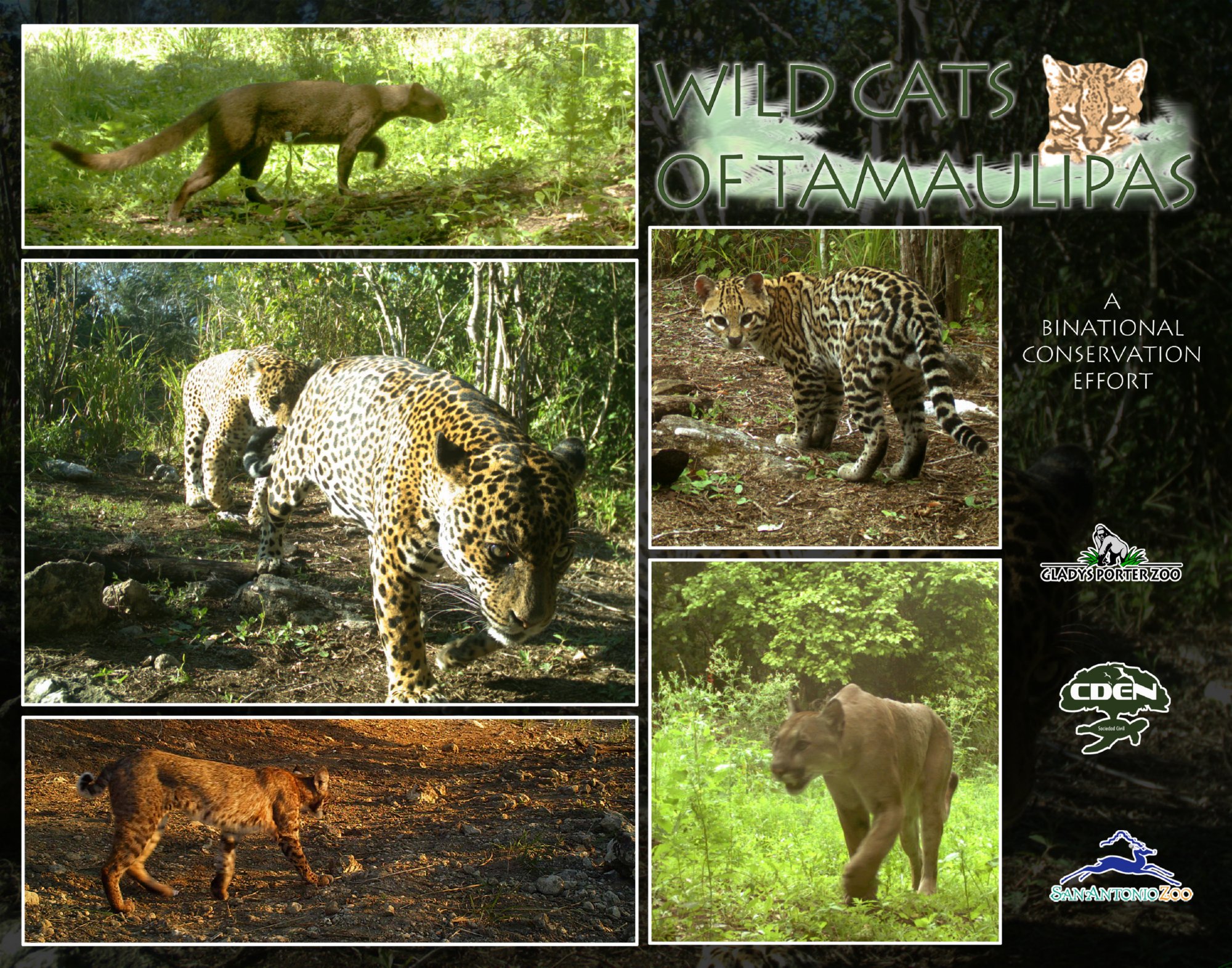 Mexico is one of the most biologically diverse countries in the world thanks to its large size, variety of habitats, and position as a transition zone between North America’s temperate and Central America’s tropical regions. However, little is known regarding the distribution and status of Mexico’s wildlife, including the iconic and endangered jaguar. Relatively little government land in Mexico is dedicated to conservation and most of its wildlife survives outside of protected areas. In northern Mexico, much of the land is owned by private cattle ranchers. Thus, cattle ranches have a critical role in conserving the country’s wildlife.

In 2012, the U.S. Fish and Wildlife Service/Laguna Atascosa National Wildlife Refuge commissioned a non-profit organization, Conservación y Desarrollo de Espacios Naturales (CDEN), to conduct a monitoring study. CDEN used motion-sensitive cameras to determine the status of the ocelot on ranchland in the Mexican state of Tamaulipas with the hopes that the population would be healthy enough to allow the transfer of an ocelot to South Texas to boost its endangered ocelot population.

One of the most exciting results of the study was a visual record of an amazing variety of wildlife in the area. The cameras captured images of over 20 mammal species, including five wild cats: jaguars, pumas, ocelots, jaguarundis and bobcats. CDEN established the Wild Cats of Tamaulipas Binational Conservation Program (WCT) following the initial study to continue to monitor wild cats in the area and work with the local community and government to conserve them.

With support from the Cincinnati Zoo & Botanical Garden, the Gladys Porter Zoo, and San Antonio Zoo, WCT established an environmental education and outreach component in 2015 to provide educational programs and materials to local communities in Tamaulipas. The goal is to make people aware of the presence of wild cats in the region and convey the importance of protecting their populations. Wild cats play important roles as predators, maintaining balanced ecosystems by keeping prey populations in check.

Between July and October, approximately 1,600 people were reached through WCT education events including:

Activities at these various events included presentations and activity stations where people could talk to CDEN leaders, Francisco Illescas and Rossana Nuñez, about wild cats and get a good look at a camera trap and various cat skulls.

People could also make rubbings of jaguars and take a reusable bag of educational materials with them. The bags included crayons, jaguar activity booklets, and WCT brochures/field guides to the five wild cats, which the Cincinnati Zoo helped to create.

People could also take their picture in a large stand-in of one of the scenes from the jaguar booklet.

And, of course, the star of each event was Alan, the new jaguar mascot.

WCT also created and printed 10 Wild Cats of Tamaulipas posters featuring camera trap images to use at the events.

The events were successful in increasing the general public’s awareness of the rich biodiversity still present in Tamaulipas, particularly the presence of five wild cat species. In addition to continuing public education events in the future, WCT plans to meet with and present to ranch owners at livestock association meetings to garner their support.