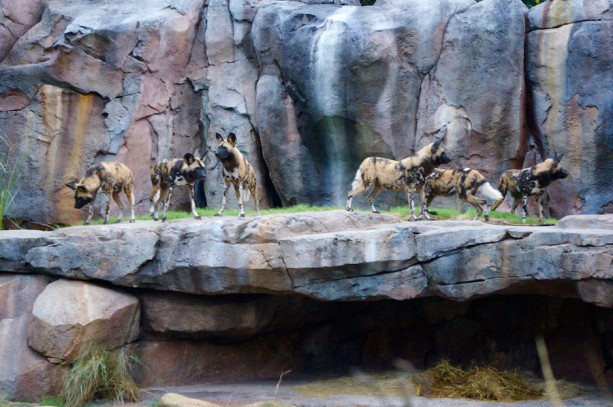 As some of you may have noticed on your recent visit to the zoo, the male painted dog puppies are no longer here. On November 11, our six males, Oswald, Riddler, Alfred, Luke, Hugo and Bruce, were moved to Disney’s Animal Kingdom Theme Park. This move was recommended by the Association of Zoos and Aquariums’ (AZA) Species Survival Plan (SSP), which ensures healthy populations and genetic diversity among zoo animals. Typically, when you have a stable alpha pair, painted dogs stay in their family pack until they are two years old so that they can see another litter raised and learn how to be great parents or helpers in the future. Unfortunately, with the passing of our alpha male, we had to make this move before our juvenile males reached breeding age.  In their new home, the boys will be rotated with spotted hyena and viewable to visitors throughout park operating hours.

To prepare for a move like this can take weeks or months of training. The dogs have to be taught to break from their natural inclination to stay together as a pack and enter crates individually. Getting them comfortable being separate and being in a smaller space takes a lot of work and patience. The first step is to just let them see the crate, touch it, smell it and let them have access to it with both ends open so they can explore in and around it. Next, we would place the crate in a doorway that they have to walk through. Again, this just gets them used to going in and out of it. Once they are used to it as part of their holding, we put one door on the end so that we can ask them to come into it to get treats. Keepers secure the crate to the wall with the crate flush to the doorway, and then ask the dogs to come in to take snacks through the mesh in the crate door. It didn’t take long for the boys to be comfortable being in the crates. The younger dogs, especially those that have never traveled in a crate before, tend to do better since they have no prior knowledge of the experience. We only use their favorite snacks like beef heart and chunk meat to capture this behavior. Due to the time we were able to spend conditioning them, all 6 dogs were crated and loaded on the transport truck in 40 minutes on the day of their departure. The boys did such a great job!

The week before they were scheduled to go out, two keepers from Disney’s Animal Kingdom Theme Park traveled to Cincinnati to meet the dogs and their keepers (including me). We discussed the complexity of their social structure, husbandry, personality traits and behaviors specific to the pack they would be escorting to Florida. The keepers, Melaina and Heather, also observed crate training sessions and familiarized themselves with how we get the dogs to take their monthly heart worm preventative.

After a 14-hour drive, the boys arrived safely and were unloaded into their new home. The 2 lovely Disney keepers let us know as soon as they got there and have been sending updates on them every couple of days since their arrival. Even though we were sad to see them go, we’re happy that these special animals will have the opportunity to inspire the millions of visitors that visit Disney’s Animal Kingdom Theme Park. With a much larger audience, it is my hope that Alfred, Oswald, Riddler, Luke, Hugo and Bruce will excite more people to care about this species and their plight in the wild. For the time being, Selina, Ivy, Lucy and Quinn will be coming into their own here in Cincinnati under the watchful eye of their mother, Imara.

The boys were introduced to their new environment earlier this week!  See how they’re doing in the Kilimanjaro Safaris savanna.

One thought on “Dog Log: Chapter 8 – A Whole New World for the Boys”