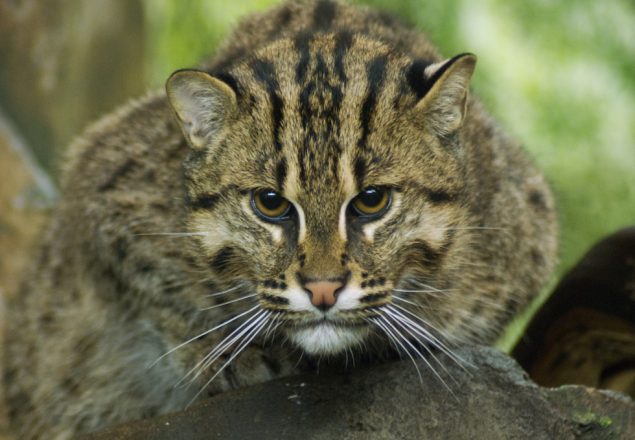 Last month, fishing cat conservationists from around the world gathered to participate in the first ever Fishing Cat Symposium in southern Nepal.  The symposium was organized by the Fishing Cat Working Group and was sponsored by various conservation organizations, including the Cincinnati Zoo.  I helped raise funds to support the symposium through the Fishing Cat Fund and was fortunate to be able to make the journey to Nepal to deliver funds and present the status of the fishing cat population in North American zoos.  My goal was also to see where the Zoo could play a role in global conservation of the fishing cat.

I arrived in Nepal a week before the symposium to help out with last minute preparations and also to see the sights. After a few days in the fast-paced and colorful city of Kathmandu, I boarded a bus to Sauraha, located just outside of Chitwan National Park. Many moons ago, the Cincinnati Zoo had a greater one-horned rhino (also called an Indian rhino) named Chitwan and I could not pass up the opportunity to possibly see an Indian rhino, and maybe a tiger or even a fishing cat!

Chitwan National Park was an amazing adventure.  The rhino population is doing quite well there as they do not face the same poaching issues as do the rhinos in Africa. Despite the heavy vegetation of the jungle, they are commonly seen around the park. During my three days in Chitwan, I was fortunate enough to see three rhinos!

After my time in Chitwan National Park, I met up with the conservationists to travel to the symposium location, a resort on the other side of the Narayani River. Conservationists had come from fishing cat range countries including Nepal, India, Sri Lanka, Cambodia and Bangladesh, as well as non-range countries including the United States, United Kingdom, Spain and Germany.  Most people have no idea what a fishing cat is, so it was exciting to be in a room of fishing cat experts and enthusiasts.

On the first day, each participant gave an update on the status of their fishing cat population, habitat and project. I learned that while we generally say that the fishing cat’s range is “Southeast Asia”, we really are learning that the range can include any of the southern tropical Asian countries. Some Southeast Asian coutries have little traces of fishing cats and some outside of Southeast Asia have populations that are thriving.  The dense habitats that fishing cats may inhabit, as well as their elusive nature, makes determining their population numbers quite a challenge.

The next two days centered on strategic planning.  Participants brainstormed the various threats across the fishing cat’s range and what they think are the main issues hindering conservation of this species.  Here is where the real challenge began.  Conservation of any species is a multi-faceted issue.  In many range countries, the fishing cat competes with people for food sources (fish), and in other countries, people depend on fishing cat habitat (mangrove forests) for firewood to heat their homes and cook their food. How do you prioritize who needs a resource more? How do you approach a local community who may be struggling to subsist and get them on board with conservation of an animal that they may perceive as a threat?  These are the same questions that many conservationists must answer. Fishing cats face the same threats as many other carnivore populations – habitat loss to agriculture, urbanization and/or industrialization, human-carnivore conflicts, poaching for meat or medicinal products, retaliatory killings, collisions with cars and habitat fragmentation. Three groups formed to take on the specific topics of ecological knowledge, socio-cultural themes and policy issues.

In the end, each group formed objectives to add to the larger Strategic Plan.  Symposium participants agreed to the objectives and assigned themselves a contributing role to any objective where they can make a positive impact.  We pledged to implement the Strategic Plan and reconvene in five years to evaluate our progress.  The area where I feel that I can make the greatest contribution is to increase the global education and understanding of fishing cats. My first goal is to work with the conservationists to create multi-lingual literature that highlights the habitat and conservation of the fishing cat.  I hope to integrate the expertise of the Zoo’s education, signage and graphic teams to create a children’s book that can be translated into the various languages of fishing cat range countries.

We trekked through the jungle in the search of local wildlife. Mostly I just saw leeches, but the jungle teemed with potential.  In addition to fishing cats, Chitwan National Park is home to jungle cat, leopard cat, clouded leopard, leopard and tiger. So many cats!

While we did not see any cats, we found these very clear tiger tracks along the river.  We had been warned that a man-eating tigress inhabits the area, so there was some apprehension about seeing proof that she has been around the area recently.

While our jungle trek did not yield much wildlife, it gave us another opportunity to spend time together and discuss best practices in the field and among our communities.  Connections were made, contacts were exchanged and friendships were created, bound with the common love of fishing cats and the commitment to their conservation.

Twenty-six participants spanning nine countries from three continents met in Nepal with a common goal, to save the endangered fishing cat.  It was a rare privilege to participate in the process, to see the inner workings of a conservation planning organization and to be included in a Strategic Plan designed to take action to save a species.

I had an amazing journey to Nepal and my last moment of awe came on the airplane as I was leaving the country.  The Himalayas appeared on my side of the plane, reminding me once again that we live in a dynamic world filled with beauty and wonder, a world worth conserving. I am proud to be a part of an organization like the Cincinnati Zoo that teaches the value of conservation and supports programs that work toward global conservation and understanding of our incredible planet.