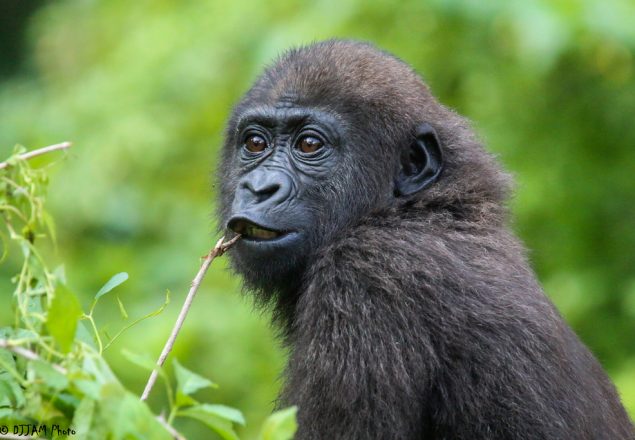 It’s hard to believe, but Gladys the gorilla turns three years old today!  Since arriving at the Cincinnati Zoo as a one-month-old orphan, we have had one fun and fulfilling adventure with her.  However, Gladys has a lot of adventures still to come on her long road to adulthood.

As with people, gorillas take a long time to grow up. For females, it takes about 10 years to mature, and for males, it takes 13 to 15 years!  During these years, they go through several stages, each one building on the previous stage.  Until they are three years old, gorillas are referred to as babies and they are dependent on their mothers for nourishment.  They will start sampling solid foods by around one to three months old, but will nurse from mom for three to four years.  The amount they nurse will gradually flip-flop with solid consumption over those years.

Gorillas are born with very little natural instincts. Unlike a snake or spider that pretty much know everything they will need to survive the second they hatch, gorillas have many learned skills they must acquire over many years. Gorillas have over 13 different vocalizations and inflections, along with many facial expressions and body postures that form a complex language. They start learning this language from day one.  They have rules of social etiquette to learn as well as survival skills about where to go or not go, what to eat and what to embrace or fear.  Baby gorillas build their motor skills and strength during this stage as well, all setting the foundation for the next phase.

Between three and six years old, a gorilla has pretty much moved out of the “baby” phase and is considered a juvenile. They are no longer dependent on their mothers for milk and rely solely on solid foods.  Although they still need their mothers and families for comfort and protection at times, three-year-old gorillas have more confidence to explore even further and spend long periods away from mom. They enjoy a new level of relatively carefree freedom while learning a few harder life lessons along the way.  Their personalities begin to become more defined during this stage.

Between six and 10 years old, gorillas are referred to as sub-adults. They are still not fully grown physically.  The carefree playfulness of being a juvenile is augmented by more adult-like interactions and experiences.  Sub-adults learn to shape breeding postures though regular wrestling and playing bouts, although females do not reproduce in the wild until they are about 10 years old.  By now, they have very distinctive personalities formed by previous experiences that will greatly influence their futures.  There is a clear hierarchy within gorilla society.  The pecking order is set based on many factors including the status of their mothers, intelligence, physical size and political savvy.  During the sub-adult stage, young gorillas work very hard to establish their social status through both positive interaction and aggression as they define their individuality even more.

By 10 years old, gorillas are considered adults.  Females may have migrated from their natal groups to improve their social life with a new family. They become new mothers and begin teaching young gorillas how to become adults.  At 10 years old, males most likely have been driven from their natal group by their father as they have become too rambunctious and challenging to the cohesiveness of the family.  Ten-year-old males are keenly interested in breeding, but are not quite mature or physically impressive enough to attract females so they go through an extra stage called “blackback”.  During this stage, blackbacks may live as solitary males or find other blackbacks to hang out with in a bachelor group, kind of like a gorilla YMCA.

By the age of 15 years, blackbacks have grown into their full size and are now called silverbacks.  All male gorillas become silverbacks.  Silverbacks, of course, get a silver coloration on their backs and develop large musculature on their heads.  This enhanced sagittal crest and large body size, combined with a silverback’s specific personality, can attract females.  Once a gorilla has reached a full silverback stage, he can acquire females in his group and start his own family.

So as Gladys reaches the juvenile gorilla stage milestone, it’s fun to review where she has been and look forward to what is in store on her long road to becoming an adult. We’ll watch her personality take further shape through positive and challenging life experiences. The bottom line is three years old is a great age to be a gorilla, especially when you have two younger sisters to go on the adventure with!

4 thoughts on “It’s Good to be a Three-year-old Gorilla!”