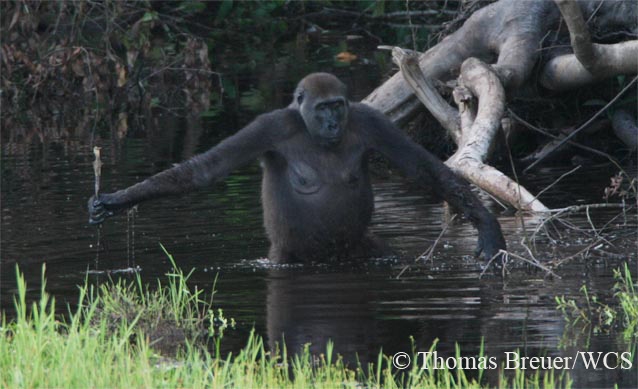 In the early years of wild gorilla research it was observed that they did not utilized bodies of water much and got most all of their moisture from the succulent vegetation they consumed.  Most of this information came from research being conducted with mountain gorillas. (Gorilla beringei beringei).  Of course a life in the rainforests meant they would frequently get very wet but never were they seen to submerge portions of their bodies into deeper water.  This was very true of mountain gorillas as they lived on very hilly terrain where large pools could not form.

To the contrary, zoo gorillas have been known for many years to enjoy a dip in their habitat water features and even submerge their heads at times.  One of the classic stories from the vast Cincinnati Zoo and Botanical Garden (CZBG) gorilla history recounts a time when an expecting female gorilla “Amani” climbed down into the shallow water moat in front of the gorilla exhibit out of sight.  When she climbed back up she was carrying her newborn baby.  This baby was named “Kubatiza” which means “baptism” in Swahili.  There have been many enriching episodes involving zoo gorillas and water over the years but it wasn’t until the 90s that more in “depth” (pun intended) observations of wild western lowland gorillas (Gorilla gorilla gorilla)( the same species housed in zoos) revealed  that gorillas actually do frequent pools of water.

The longest running research project show casing gorilla water usage is the Mbeli Bai Study in the Republic of Congo. Bais are naturally occurring marshy clearings in the rainforests.  Gorillas come to these bais to wade out into the water to feed on the very mineral rich vegetation floating on the surface, primarily hydrocharis. They spend hours in at the Mbeli Bai  selectively harvesting choice pieces and then carefully stripping it down to eat the tasty pith.

While congregating in the open clearings, gorillas use the time to work on their social game as well.  Many times two family groups will mingle while the silverbacks representing each group posture and try to impress each other and the ladies of the other’s group.  Sometimes lone bachelor males  show up to spar with other silverbacks through audacious chest beat  displays, augmented with dramatic water splashing.  Occasionally, these swooning efforts pay off and a female might decide to migrate to a different silverback or at least consider the invite until their next meeting.

dditionally, the first recorded case of wild gorilla tool use was documented by the Mbeli Bai Study, when a female gorilla modified a stick and used it to measure the depth of the water prior to entering.  Of course as with water play, zoo gorillas have been using sticks and other items as tools to manipulate food out of puzzle feeders for many years but to see this done in the wild with no human influence or prompting was a huge discovery. 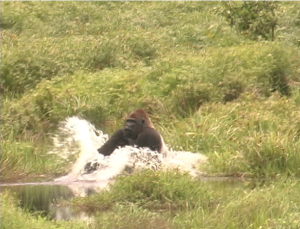 ver the years researchers have identified over 300 different individual gorillas that frequent Mbeli Bai, along with forest elephants, yellow-backed duiker, sititunga antelope, buffalo, red river hog, colobus monkeys, crocodiles, otters, African fishing eagles and many other species. They are learning important behavioral and demographic information critical to conserving them and their very threatened Central African rainforest habitat.  CZBG is proud to have supported and partnered with the Mblei Bai Study and related research efforts in North Congo for 15 years. 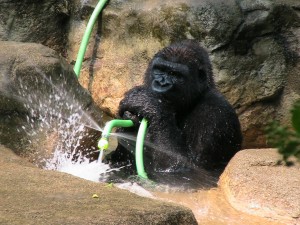 Please enjoy this recent update from Mbeli and this video depicting a marshy, muddy, young gorilla seemingly a little put off by being wet and then kind of embracing the fact!