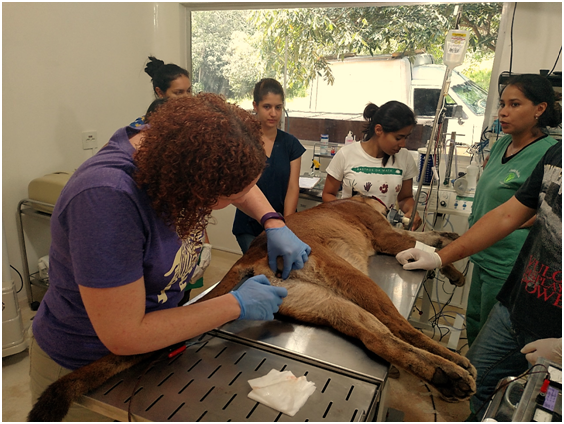 For more than 20 years, Dr. Bill Swanson (CREW’s Director of Animal Research) has been working in Brazil to conserve Latin American felids (animals in the cat family). I was fortunate to get to travel with him to Associação Mata Ciliar (AMC), a non-profit organization that promotes the conservation of over 300 plant and animal species. AMC’s Centro Brasileiro para a Conservação Dos Felinos Neotropicalis (Brazilian Neo-Tropical Feline Conservation Center) is the largest feline conservation center in the country, which houses eight of the ten cats endemic to Latin America. Habitat loss and poaching have threatened most of these species with extinction in all or part of their natural ranges. Specifically, we’ve come to AMC to work with jaguars and tigrinas, which you can read about in my previous blog post!

Two experiences from the last few days on the road in Brazil stand out.  One, collecting semen from a puma, was planned and part of the reason for our visit.  The other was an unexpected encounter with a boa constrictor.

The puma has many aliases: cougar, mountain lion, panther, and catamount to name a few. Why so many? The puma has a vast range across the Americas, from high in the mountains to lowland deserts. Thus, this extremely adaptable cat has encountered many different cultures which call it many different names (even in Portuguese, at least two names exist: onça-parda and suçuarana).

Faced with fragmented habitats and dwindling wildlife prey, puma populations are currently on the decline in Brazil. Here, pumas are considered near threatened, with certain subspecies classified as vulnerable. During our visit, we helped AMC start a semen bank for pumas. First, the male is anesthetized so we can collect semen.

Next, the sample is processed with a specialized medium that contains cryoprotectants and loaded into “straws”. Finally, the straws are frozen and stored in a liquid nitrogen tank for future use.

Historically, if a male dies before he has a chance to breed, his genetic contributions are lost forever. This semen bank represents an important safeguard against that loss, preserving the puma’s genetic diversity within a liquid nitrogen tank. The semen bank can facilitate gene exchange between pumas at different locations without the need for animal transport. Because semen can be stored in liquid nitrogen for decades, centuries, or perhaps even forever; semen banks can expand gene exchange across time, allowing a puma to contribute to the gene pool indefinitely.

Why did the snake cross the road?

Local authorities often contact AMC to assist with distressed wildlife. In this case, the county police rescued a boa constrictor that was located dangerously close to a highway. Once at AMC, veterinarians draw blood to screen for ectoparasites and other diseases.

The snake was then transported to Serra do Japi, a 350 square kilometer (135 square mile) nature reserve of the Mata Atlântica (Atlantic Forest), located in a mountain range just outside the city of Jundiaí. Five hundred years ago, the Atlantic Forest spanned across 330 million acres of Brazil. Today, it’s estimated that less than 15% of this once vast forest remains. Despite being only a fraction of the size of its more famous neighbor the Amazon rainforest, the Atlantic Forest remains lush with endemic species and rivals the biodiversity of the Amazon.

Japi was classified as a Reserve of the Atlantic Forest Biosphere in 1994. To help preserve wildlife, access to Japi is extremely limited and the general public is not allowed inside. Indeed, we were only granted access to release the snake. Once inside, I was astounded by the beauty of Serra do Japi. Such a stark contrast to the crowded city of Jundiaí, Japi is a beautiful reminder of what this area used to look like:  trees thrust upwards creating a lush green canopy above, and a series of rivers and waterfalls carving out the rocks below.

After driving down a windy road for about 15 minutes, we decided on our release location. Despite my fear of snakes, Cristina (veterinarian and Wildlife Coordinator at AMC) was kind enough to let me help with the release. Also helping were AMC trainees Gabriel (a veterinary student) and Natahlia (a biology student) who clearly did not share my snake phobia. Gabriel carried the transport box to the side of the road and we slid the lid open. Gabriel coaxed the snake out with a hook and off he (or perhaps she) went!

There is something truly beautiful about releasing an animal back into the wild, particularly in a case like this when not only did we prevent an almost inevitable occurrence of a vehicle strike, but we also relocated this snake to a beautiful (and protected!) area far away from the urban sprawl of Jundiaí.