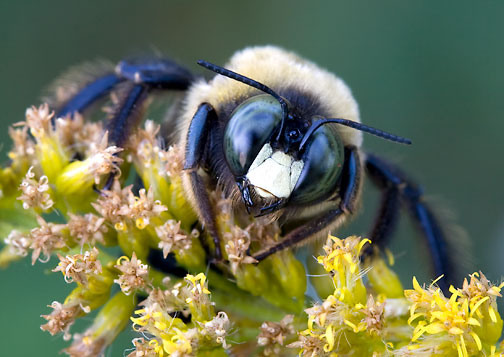 Spring has sprung and before long the Cincinnati Zoo & Botanical Garden will be inundated with school groups and Carpenter Bees. And while your first instinct will be to avoid them I promise you, the school children are not to be feared. Neither are the Carpenter Bees (Xylacopa viginica), the large, yellow and black flying insect frequently encountered on zoo grounds during spring. Though they are often mistaken for Bumblebees they can be most easily differentiated from them by their black, hairless abdomens; Bumblebees have fuzzy abdomens. Carpenter Bees were so named because the females excavate their nest tunnels in wood. But the bees only nest in the wood, they do not feed on it; Carpenter Bees feed on nectar and pollen. And while Carpenter Bees can sometimes damage wooden structures the damage is occasionally caused by woodpeckers working to excavate the bees themselves for food.

Carpenter bees overwinter as adults and are among the first insects observed in spring. Each male stakes out a territory in the vicinity of a nesting female awaiting the opportunity to breed. Any other males entering the territory will be chased away and just about anything else entering the territory will be investigated. Females will reuse old tunnels or excavate new ones. Within each tunnel is a series of small chambers. A single egg is left in each chamber along with a small amount of nectar and pollen to nourish the larvae. Young Carpenter Bees will emerge from their chambers in late summer to feed on nectar in preparation for a long winter’s hibernation. The following spring they’ll emerge and begin the cycle all over again.

The Carpenter Bees encountered on zoo grounds are generally males, who’ll investigate anything that comes into their territory. Males can be easily differentiated from females by the gold or white marking between their eyes. Carpenter Bees are large and fast flying so it’s easy to see why people mistake their curiosity for aggression. But there’s really nothing to fear; male Carpenter Bees, like all male bees, wasps or hornets cannot sting. The stinger is a modified ovipositor (egg laying organ) which males don’t have. Female Carpenter Bees are capable of stinging but rarely do unless harassed.

Carpenter Bees are probably the most common bees in greater Cincinnati. The Carpenter Bees you’ll encounter at the Cincinnati Zoo & Botanical Garden are going about their lives the way their species has for countless millennia. They just happen to be doing it at a zoo instead of in a deciduous forest.