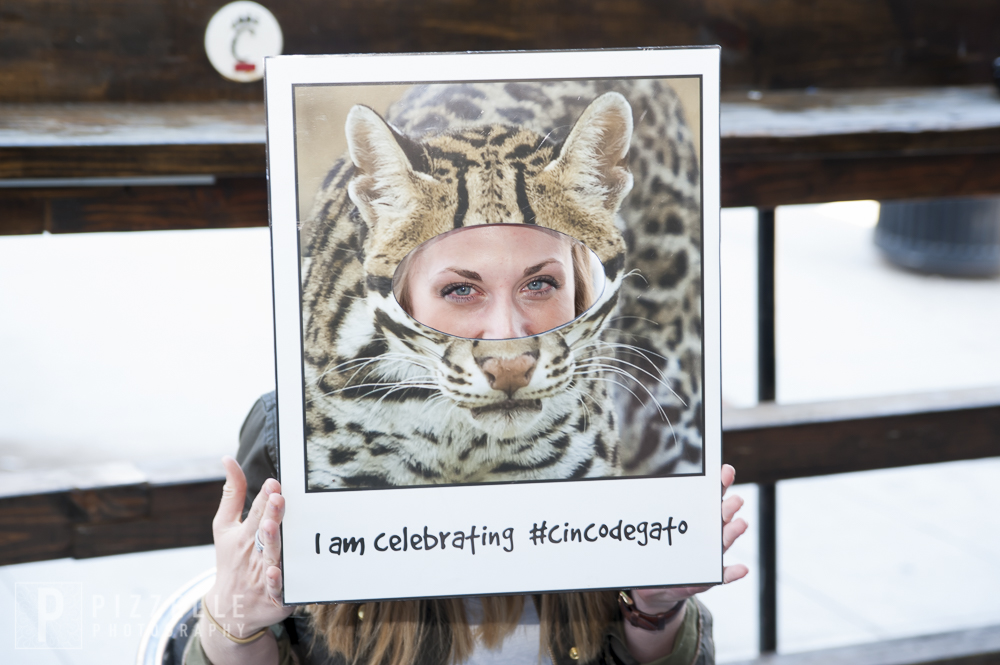 Thanks to all who came out to AAZK’s Cinco de Gato fundraiser on May 15 to support Texas ocelot conservation! We had a fantastic time at Ladder 19. Great food and drinks, and Sihil, our ocelot ambassador, was a star as usual. With your help, we were able to raise more than $2,000 to support ocelot conservation through the Friends of Laguna Atascosa National Wildlife Refuge.

The endangered Texas ocelot needs our help more than ever. Over the past year, seven of the estimated 80 remaining Texas ocelots were killed by vehicles. Six of these mortalities were adult males. Among ocelots, it is not easy to be a maturing male. In order to prevent competition for access to breeding females, older males often force the younger males to leave the area where they grew up, sending them out to find females and territory of their own. Once out of protected, dense brush

habitat areas, these younger males encounter the human-developed world and all of its dangers, in particular roads and vehicles. In reaction to the large proportion of road mortalities being males, Dr. Hilary Swarts, a wildlife biologist who monitors ocelots in south Texas with the U.S. Fish and Wildlife Service (USFWS) said, “I can’t say it’s surprising that six of the seven deaths were males, since they have such a rough time of it once the older males start to see the younger males as competition for mates and territory.”

It is also not a great surprise to see that three of the seven deaths occurred on Highway 186, which bisects optimal ocelot habitat. Though road signs warning of wildlife were posted in the high risk stretch of Highway 186 in November 2015, thanks to actions by Willacy County officials and the Texas Department of Transportation (TXDOT), signs alone did not reduce the threat of vehicle collision to ocelots.

pass under roads to avoid vehicles.  USFWS and TXDOT have worked hard to establish ocelot road crossings in areas south of the Laguna Atascosa National Wildlife Refuge. In the future, they plan to establish crossings in other areas where recent ocelot deaths have occurred, particularly on Highway 186.

The good news is that construction of wildlife underpasses has already begun on FM106, a road that borders and runs through excellent ocelot habitat on the Laguna Atascosa National Wildlife Refuge. Ocelots have been killed there in the past. The first ocelot crossing was installed on April 27, 2016 and the next one is underway.  A series of eight crossings in total is planned for roads near the refuge.  Once installed, crossings will be monitored to see how ocelots and other wildlife respond. “This is new terrain for us, since wildlife crossings have not really been built in ocelot habitat before. It will be very interesting to see what our wildlife crossing monitoring program reveals about when and how ocelots and other wildlife use the newly installed crossings” Swarts said.

Another positive development is that this summer, TXDOT will begin installing a series of four ocelot crossings on State Highway 100, which has been the site of five known ocelot mortalities over the years.  USFWS is also working with partners and neighboring landowners to establish permanent wildlife corridors for ocelots and other species in the area around Highway 100. These targeted wildlife corridors are made of suitable habitat that will connect protected areas, and provide a safer travel route to the wildlife crossings that are being constructed.

With such a small population, every ocelot is important to the population’s survival. Past data have shown that 40% of identified ocelots were killed by vehicles. The new era of installing wildlife crossings on roadways in areas where ocelots live will be one of the most important ongoing actions for ocelot conservation in south Texas.

3 thoughts on “Endangered Texas Ocelots: The Good, the Bad and the Ugly”