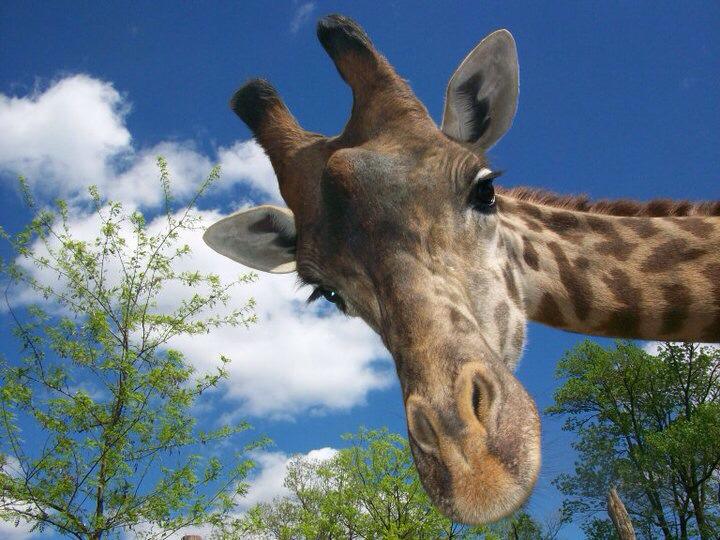 Have you fed a giraffe lately?

A little girl, maybe five years old, stretches her hand toward me, bits of dollar bills poking from between her small, clenched fingers. Her pink shirt bears the outline of a stubby giraffe with prominent eyes and smiling mouth. Among his spots are a couple drops of blue, evidence of the blueberry ice cream the child must have recently enjoyed. “Would you like to feed a giraffe?” I say. She nods her head slowly, seeming afraid to smile. “She’s been so excited to do this,” chimes the woman behind her, likely her grandmother. “Giraffes are her favorite.”

Working at the Cincinnati Zoo’s Giraffe Ridge, guiding guests in hand-feeding the world’s tallest land mammal, rewards the soul and the funny bone daily. I’m privileged to accept the girl’s crumpled three dollars and direct her to the railing of the deck, where another Interpreter of Wildlife and Fun shows her how to hold out lettuce leaves for eager young Jambo. She moves with caution as she gets closer and realizes the animal’s head is larger than her whole kindergartener body. But she accepts the lettuce and stretches her arm toward the netting, where 15-foot Jambo happily slurps it away. A smile takes over the girl’s face. Her eyes dance, she brings her hands together in front of her ice cream-spattered shirt and bounces up and down on her heels. Her grandmother, so taken by the sight, has forgotten to take a photo. “Do it again!” shouts Grandma. For the second piece of lettuce (feeders get two per experience) Grandma is ready to make her Facebook friends’ day… and remember this moment for life.

It’s World Giraffe Day and the perfect time to appreciate these spotted giants around the world and here at the Cincinnati Zoo, where we’re privileged to share four of them with the visiting public. Ours are Maasai Giraffes, the largest of nine subspecies, native to Kenya and Tanzania.

To say a giraffe is an incredible animal doesn’t convey their majesty, their beauty, and their personalities, things you can’t fully appreciate until you’re face-to-face with one. In the short time that I’ve been part of the Wild Encounters team, helping with feedings, I personally haven’t ceased to wonder at them each day, and evidence of their impact streams across the deck in the form of Zoo guests, ranging from nervous to ecstatic. As amazing as the giraffes are to behold in the Zoo, anyone who has seen them in the wild can attest to another whole level of awe. Fortunately, the Zoo provides a close-to-home encounter.

Giraffe feeding is the great leveler. It’s not just five-year-old girls who light up. It’s babies in their parents arms, boisterous school groups, tribes of teen-aged friends, middle-aged couples, elderly folks, people of every color and culture, from Mennonites to Chinese tourists, English-speaking or not, and individuals with every kind of disability.

I saw a blind woman blown away by the feeling of the giraffe’s breath on her arm and the wet tongue brushing her hand. I had a retirement-aged woman walk up and say, “I don’t have a child with me or anything. I’m just by myself, but this is on my bucket list.” I saw a teen boy who was clearly over hanging out with his parents all day, grin from ear to ear but then give his second piece of lettuce to his dad saying, “You HAVE try this.” There was one little boy who just couldn’t. Stop. Laughing. The whole time… Others cry. I’ll admit to having cried along with one or two of them.

In 1889, the Cincinnati Zoo became the first zoo in the Western Hemisphere to welcome a baby giraffe, a tradition that has taken breaks but continues today. Tessa and Kimbaumbau (Kimba), designated by the Association of Zoos & Aquariums (AZA) as a match for breeding, arrived in 2010. Cece and Jambo joined them in 2013. Regulars and staff members have their favorites. Kimba, the male, is breathtaking in his sheer size, 16.5 feet with eyes the size of racquetballs. Tessa, the oldest, is graceful and sometimes shy to approach the deck. Cece and Jambo have been getting a lot of attention since we announced that each is carrying a baby, and no one can miss Jambo’s “messy” hair atop her ossicones.

According to the Wild Nature Institute, only about 80,000 giraffes remain in the wild. As a keystone species, their well-being affects the well-being of whole habitats. Over the past few years, the Zoo has supported the work of the Wild Nature Institute to conduct photographic mark-recapture surveys of Maasai giraffe in the fragmented Tarangire Ecosystem of northern Tanzania. A portion of the proceeds from our Gentle Giants: Private Giraffe Encounter program supports this effort.

I invite you to join us for giraffe feeding every day throughout the summer, from 9:30 a.m. to 3:30 p.m. We hope that by meeting giraffes up close, at our Zoo or others, you’ll find the inspiration to take action.

Today my favorite visitor is Robbie. He’s about three years old. He and his big sis have just finished feeding, and now their parents just want them to pose for a moment with Cece behind them. Mom holds up her phone ready to snap, saying “Look at Mommy!” Sister faces the camera, posed and smiling, but Robbie is turned 180 degrees away, stock still and agog at the giraffe’s face on the other side of the netting. “Robbie! Robbie, turn around!” Mom pleads, glancing anxiously at the long line of people waiting. I’m happy to give her a couple of minutes to capture the shot. “Robbie, look at Mommy!” Big sister tugs at Robbie’s arm, encouraging him to turn. He’s mesmerized. Finally, Mom smiles and slips her phone into her purse. She’s just happy to see him happy. She takes his hand and guides him away to his next adventure.