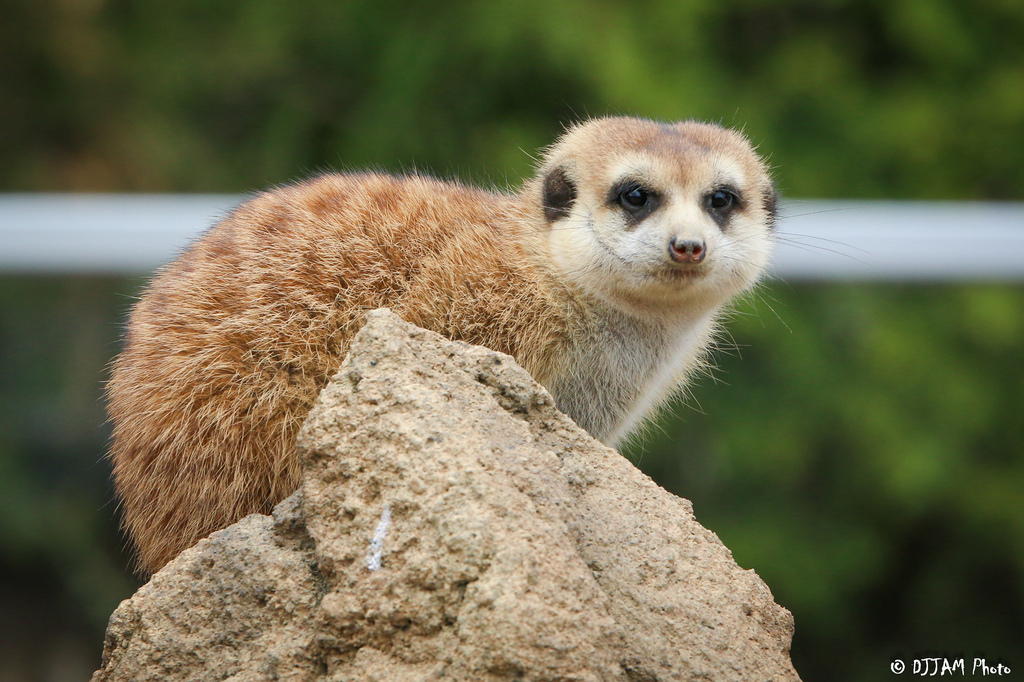 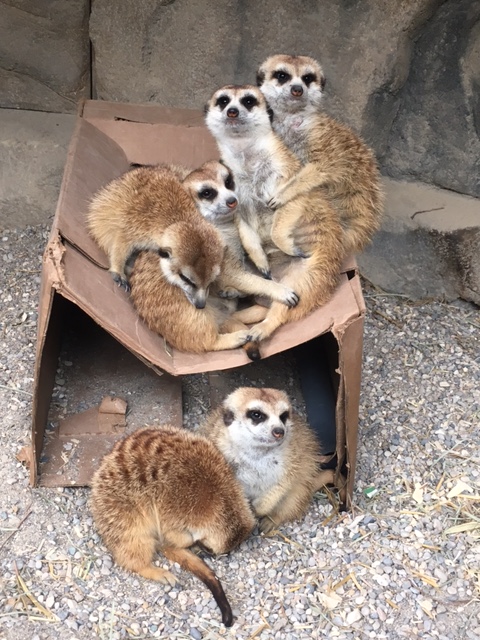 Although our mob of meerkats may be some of the smallest animals in our care, they are easily one of the most charismatic groups of animals in the Africa department. They love to engage with enrichment, spend their days digging impressive tunnel systems, and are great little trainers.

We have five males and one female that came to us from Disney Animal Kingdom. They are all named after famous musicians: Shakira, Mark, Bert, Louis, Zevon, and Santana. Shakira and Mark were born in the same litter and turned two on September 14. As far as I can tell, these two are our alpha meerkats. Bert, Zevon, and Louis all had their second birthdays in June. Santana is their father and will be turning seven this November.

Meerkats primarily eat termites and scorpions in the wild, but will also catch little rodents and lizards. They have great far sighted vision and have sentries that are always on the lookout for danger like birds of prey or jackals. Their forearms are very strong so that they can dig tunnels to live in. The tunnels have specific areas used for specific reasons- like a nursery, bedrooms, and latrines.

Below is a little bit about each of our meerkats and why they are one of my favorite animals to work with: 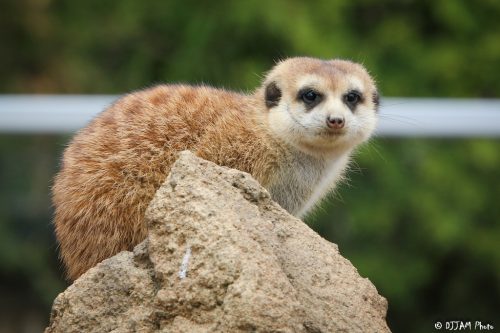 Shakira is the matriarch of the group and you can tell by her chubby belly-she definitely gets all of the food she thinks she deserves. She is great about getting her nails trimmed (what girl doesn’t enjoy a manicure every once in a while?)

and also station training. I hardly ever see her playing the sentry role, but she will dig and wrestle with the boys. Shakira was recently observed stealing a cicada from a cicada killer! She’s one tough cookie and can most easily be identified by her tail having the least amount of black on it.

I believe that Mark is our most dominant male based on the fact that he is Shakira’s side kick, never gets in tussles with the other males, and is our most confident trainer. Mark will run around the entire exhibit touching his nose to his blue, star shaped target for a tasty reward of mealworms and crickets. Mark always makes his way over to greet me when I enter the exhibit (if he isn’t snoozing in a tunnel), but it seems to be

strictly because he is hoping to get food-not because humans are so fun to hang out with. He can most easily be identified by the “kink” or bend in his tail about an inch from the base (we do not know what caused this and it does not bother him). 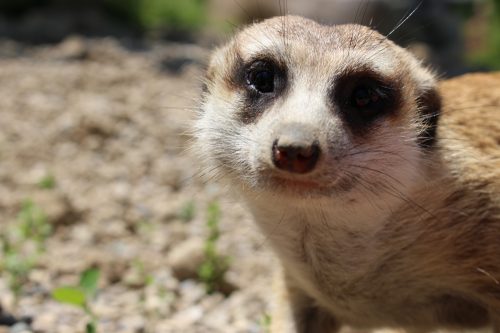 Zevon loves shoes and boots. He will dig at shoes or into my boots for minutes at a time, I imagine they must have many interesting smells on them from all of the other animals in the Africa department. Zevon is one of our friendlier meerkats and is doing well with his station training. I believe he is one of our middle ranked meerkats. From my observations Zevon spends most of his mornings on top of the termite mound filling the sentry role, keeping an eye on everything as the others get to digging their tunnels. He has what I call a “bulb” on the tip of his tail-it is thicker and rounder than the other meerkats’ tails. 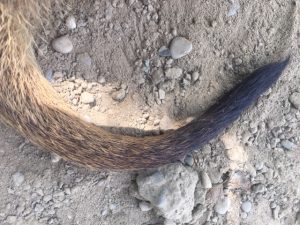 Louis is our shyest meerkat, which makes training with him a little bit more difficult. For now, while the others are station and target training, Louis will get rewarded with bugs just for coming towards his keepers. He will approach us with his siblings and hang out around us when bugs are involved, but he does not approach keepers as a solo meerkat and hides out the most when it is time for their monthly flea and tick treatment (about a drop of liquid is applied between their shoulder blades). Louis seems to enjoy attacking feathers that we use for enrichment and spends a lot of his time being the lookout meerkat. Louis and Zevon seem to be our middle meerkats and will once in a while challenge each other for their spot on the totem pole. 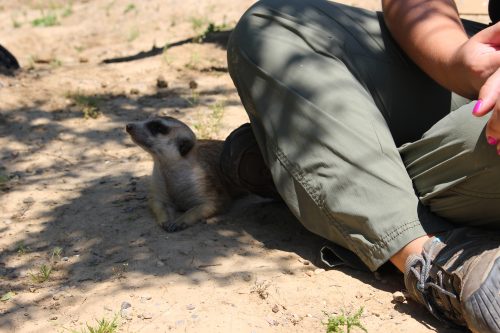 Bert is my favorite meerkat (shh don’t tell the others)! He is the bravest and friendliest with keepers and even once in a while he will climb up to my shoulder and will use me as a termite mound to get a better view. He enjoys painting and sitting on the scale when it is time to get monthly weights. Bert is most likely one of the more submissive meerkats and doesn’t cause too much trouble with the rest of his siblings. He seems to truly enjoy hanging out near his keepers and will use us for shade and lay down next to me on hot days. Bert participates in all training activities, but he doesn’t seem to be as quick of a learner as Mark, Zevon and Shakira with target and station training. 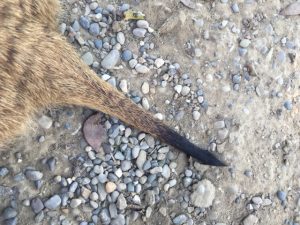 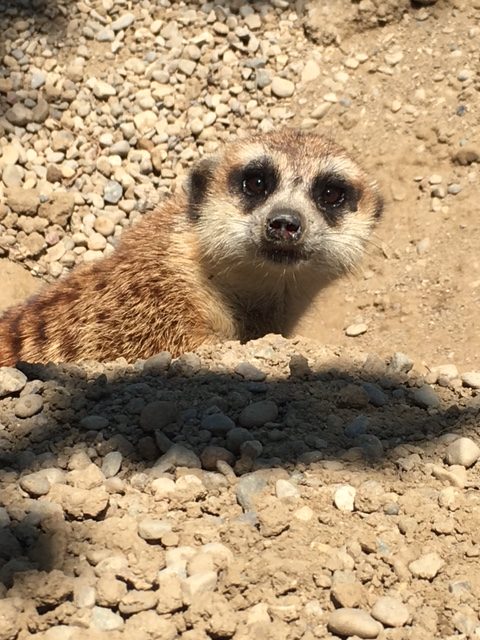 Santana is another favorite among keepers. He is the oldest of the group and is the most subordinate. Because of his low rank on the totem pole, Santana is hesitant to come out when the other meerkats are around. He doesn’t seem to mind being near his keepers, but is typically the least visible because of group dynamics. He is extremely vocal and when he comes in for his dinner at the end of the day he barks at us incessantly until he receives his special meatballs we save for him to make sure he gets his fair share of food while the others are eating. Santana is the easiest to pick out, he is the smallest with an all-black nose and spends the majority of his day digging. He LOVES to dig. 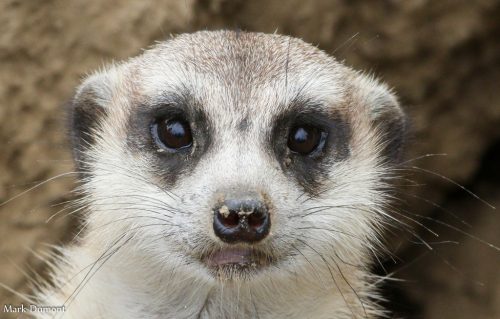 6 thoughts on “Get to Know our Mob of Meerkats!”