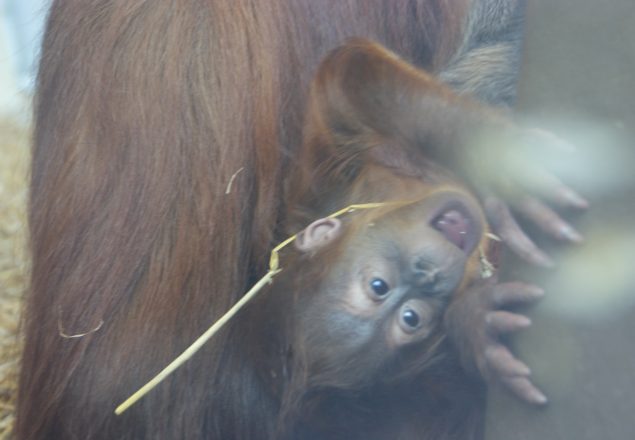 Hi, my name is Brianna Grandstaff, and I am a junior at the Zoo Academy.  That’s right, the Zoo Academy!  We spend all day at the Cincinnati Zoo & Botanical Garden, doing school work for part of the day and going out to our labs the other part of the day around the Zoo.  Our labs can be anything from working with animals, to working in commissary, to helping out in purchasing, and much more!  My lab right now is in the Education Department, where I learn about teaching people about our wild world, learn about the hard work they put into writing and teaching programs, how to write a blog, and more.  I could go on and on, but I know why you’re reading this blog, so let’s get to the point!

Great apes are one of our closest living relatives.  Amazingly smart, most are very social, and quite adorable creatures. They have caught the eye of many amazing people including my favorite person, Jane Goodall!  My love for gorillas and orangutans started here at the Zoo. I remember watching the curious apes play with their enrichment, each other, and even the crowd who was in awe just like me. I have always loved watching them do the pumpkin smash in October!  In April 2014 a documentary called Virunga came out and forever changed my life. Virunga is about what is going on in the Congo and the impact it has on mountain gorillas (Gorilla beringei beringei).  I was so heartbroken by what was going on that I needed to know more about the conservation efforts with great apes. It turns out that here, at the Cincinnati Zoo, three of our great ape species are endangered,but the western lowland gorillas (Gorilla gorilla gorilla) and the Sumatran orangutans (Pongo pygmaeus abelii), are listed on The IUCN Red List of Threatened Species as critically endangered.

The Cincinnati Zoo is home to 10 western lowland gorillas and we have one of the most successful breeding programs. In fact, we just recently had our 50th baby gorilla born here!  You might have seen our younger gorillas, Gladys (who, by the way is my favorite, but shhh don’t let the others know!) and Mona playing around in the yard, or even baby Ella riding with mom, Anju! While the Zoo might have the most successful captive breeding program for this species, their population out in the wild is still declining. Wild populations are estimated to be about 100,000 individuals which shows a population decline of about 60% in just the last 20 years. The population is still decreasing because of poaching, disease, and the number one factor, habitat loss. Habitat loss is a big one because people are mining for Columbite-tantalite, also known as coltan. Between late 1999 and late 2000, we have seen an increasing demand for coltan. Coltan is used in electronics that have tantalum capacitors, such as cell phones, laptops, pagers, and more. At one point, coltan was sold for $400 a kilogram. The demand for coltan is so high that it has even caused a war between countries neighboring the Congo. This is because the mining areas are controlled by armed factions and organized crime. Due to the increase of coltan being mined, some gorillas along with other animals are being being poached for the bushmeat trade (the killing of wild animals in Africa for food). As the gorillas and other animals are losing their habitat, they are coming into closer contact with humans who may hunt them for food. While the bushmeat trade is increasing, so is disease and this is because most bushmeat that is consumed can carry deadly diseases, such as HIV and foot and mouth disease.

While all of this is going on in the Congo, the Cincinnati Zoo has teamed up with Nouabale Ndoki Project and just celebrated their 15th year anniversary partnering together! The Nouabale Ndoki Project is helping gorillas and many other animals out in the wild through research and education for one of  the world’s largest system of wildlife parks.   We collect old cell phones and donate them to Eco-Cell so that the coltan in them can be recycled and put into new cell phones, resulting in  less mining for new coltan. If you want a chance to win up to $5,000, then gather up a team to help you collect and recycle old cell phones and join the Go Bananas Challenge! If you want to help out our gorilla friends here at the Cincinnati Zoo,  donate your old cell phones at one of the collection boxes throughout the Zoo, like at the Gorilla World exhibit, or  various locations in Cincinnati.

Our other critically endangered great ape friend is the Sumatran orangutan. If you have been down in our Jungle Trails exhibit, then you have seen our big, hairy orangutan, Henry! Just like the western lowland gorillas, the Sumatran orangutan is also losing its habitat, but for a different reason. If you have used some cosmetics, cleaning agents,lip balm, or even milk, you have probably used a product containing palm oil. Unsustainably-grown palm oil is a significant threat to the animals that live in Sumatra because people are cutting down large amounts of rainforest to make room for these palm oil  plantations. Because of this illegal forest clearing, the orangutan population dropped to a small population of 7,300 individuals. A decade ago the population of orangutans was estimated to be between  60,000-66,000 individuals. The Sumatran Orangutan is not the only animal you have heard about thatis affected by palm oil. Palm oil also impacts Asian elephants, like Mai-Tai and our very much beloved Sumatran rhino, like Harapan!  You just might have seen all of these animals in person at the Cincinnati Zoo. Just by taking a step and not buying products that do not use sustainable palm oil can help save these animals. This Halloween, you can start by only purchasing candy that uses sustainable palm oil (check out the picture below)! You can also check out the app the Cheyenne Mountain Zoo put together to help consumers find products that use sustainable palm oil and help out our animal friends in Sumatra. 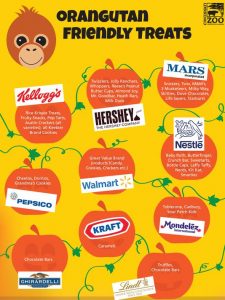 3 thoughts on “Fighting for Conservation for Great Apes”