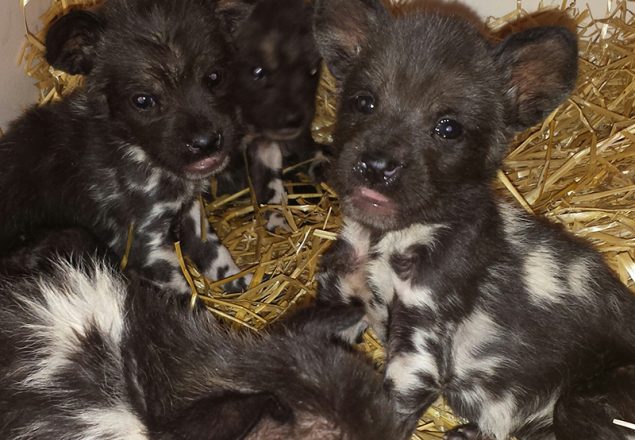 As most of you folks have heard, we now have an additional 11 puppies running around with our 4 adult Painted Dogs. Imara and Kwasi are the proud parents of 2 males and 9 females that were born October 16th. Lucy is really excited to be an aunt and poor Masai is slightly terrified of them.

Gouda, Swiss, Brie, Cotija, Queso, Colby, Bleu, Feta, (Mozzarella) Ella, Muenster and Nacho are really active and eating everything that doesn’t move. They are taking tiny meatballs from keepers and dragging bones around that are bigger than they are. 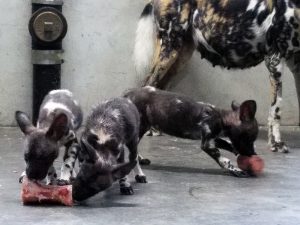 It’s really early in the game, but they are starting to show personality. Colby and Cotija are pretty brave little ladies. Nacho and Muenster started out as shy little boys but are now terrorizing their sisters. For the majority of their time awake,

the pups are either running circles around the adults or stuffing their faces with meat and regurgitated diet from their father. Kwasi does the majority of it, which is good for the kids. Painted Dogs do this because in the wild they would have to carry food sometimes for miles back to the den. If the pack just takes it back in their mouths, it could get stolen by other animals. The meat is partially broken down, so it’s easier for the puppies to eat. It also contains enzymes that are important for their intestinal tract.  Imara doesn’t do it any more for the pups. Lucy has done it a couple of times, but because Imara is a very protective mother, Lucy is only allowed around the pups when Imara communicates that it’s acceptable.

They are also changing physically. Besides growing like little weeds, they are starting to get their gold coloring in. Little Feta’s entire head is almost all yellow. Their ears are also standing straight up. At seven weeks old, we are gearing up to do their first set of exams and vaccines. This will keep the little ones protected when the go on exhibit. 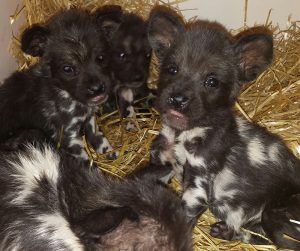 The puppies are really into tearing up paper, jumping on boxes and carrying enrichment in their mouths while a parade of puppies follow behind. They are an extreme joy to watch and interact with. I learn a little more each day about them.

This spring will be another exciting time for the Painted Dogs here at the Cincinnati Zoo. I hope you all come see another generation of puppies grow up and inspire you to appreciate one of the most endangered species on our planet.