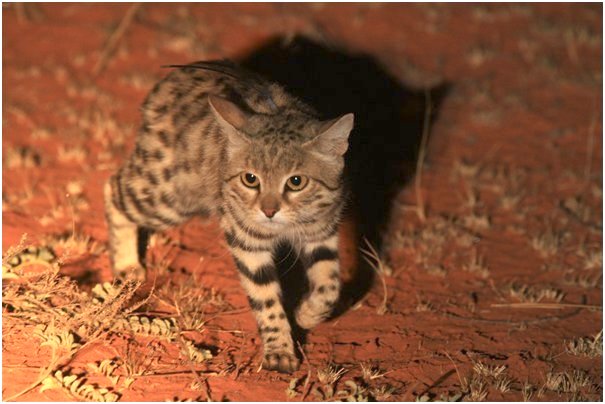 If you haven’t, you are in good company. Black-footed cats (Felis nigripes) are small cats native to the arid and semi-arid areas in South Africa, and unless you have been looking for them, you probably haven’t seen one. Few zoos have them, and even in South Africa, they are hard to see as they are nocturnal and like to hide in burrows during the day. At less than 4.5 lbs, the black-footed cat packs a punch of personality.

In contrast to most other cats, this one does not climb trees, which is not surprising as it lives in the Karoo / Kalahari region, a beautiful desert with few trees. The burrows used by the black-footed cats are made by other animals such as springhares, Cape ground squirrels, porcupines and rarely also aardvarks; the latter dig up termite mounds and make burrows to sleep in during the heat of the day.

Dr. Bill Swanson at the Zoo’s Center for Conservation and Research of Endangered Wildlife (CREW) has been working for a long time on the conservation and reproduction of five small cat species, one of which is the black-footed cat. A large part of the conservation efforts in the United States is focused on enhancing breeding in zoos. One of CREW’s alumni, Dr. Jason Herrick, has provided the reproductive expertise for the field component of the black-footed cat project. The field work relies on a team collaborating to maximize the data obtained from the capture and release of wild black-footed cats.

Since these beauties are nocturnal, much of the work takes place at night. Once a cat is captured, a South African veterinarian, Dr. Birgit Eggers, anesthetizes the cat, performs a thorough physical exam and collects blood samples for health assessment and genetic analysis. When the cat is caught close by, it can be brought back for examination at base camp. When the cats are too far from base camp, all the lab equipment has to be portable.

After an animal is caught, there are still 4 to 5 hours of work to be done before heading off to sleep: the cat has to be measured, weighed, a collar needs to be fitted, blood samples and semen samples need to be obtained, then the cat needs to be recovered before releasing it where it was caught. Additionally, it will then take 3 to 4 hours to process the samples before they make it into the liquid nitrogen for safe keeping.  The team only looks for animals until midnight, but if an animal is caught at midnight the team that tracks in the morning will only get 2 to 3 hours of sleep.

Although the team is on the lookout for black-footed cats, there is plenty of other wildlife to be taken in.

Although everyone is exhausted at the end of 12 days of working very hard and sleeping very little, everyone is happy with the results. The trip this year was very successful as five males were caught and semen was collected from all (most ever in one year), with four of them being new males to the study.   After importing these sperm samples, they will be stored at the CryoBioBank at CREW until they are used for artificial insemination, and hopefully these five males will become fathers of some of our future zooborns!

3 thoughts on “Have You Ever Heard of a Black-footed Cat?”