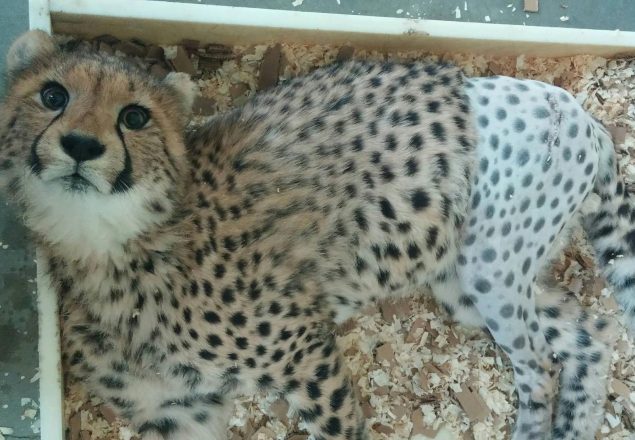 The male cheetah cub, Redd, that was born prematurely and raised in the Zoo’s nursery with sisters Cathryn and Willow has had some health struggles in his first ten months but doesn’t let anything keep him down long! Most recently, in November, he had Femoral Head and Neck Osteotomy (FHO) surgery to correct a physical abnormality that he had in his back hip. This surgery is done often on dogs and involves removing the damaged part of the bone, leaving no femur attached to the pelvis at the hip joint.  The muscles and ligaments will then hold the joint together. The surgery was performed at Medvet, by the same vet that performed his feeding tube surgery in May. Dr. Karl and his team, along with our zoo vets, worked together to make sure that the surgery would be a success in a cheetah.  The surgery went very well and Redd has been in recovery here at the zoo since the surgery. He had to be shaved for the surgery, and as you can see cheetah skin is spotted too!

Redd has been doing well since his surgery. He receives physical therapy daily, which includes walks, stretches and even magnets! Medvet staff recommended a new device, the Assisi Loop, that creates a pulsed electromagnetic field to promote growth and healing.  The biggest challenge is getting Redd to stay still when he receives loop therapy! Redd can also now have access to his sisters full time without supervision. They are allowed to run and play together in the smaller yard during the day. Redd is slowly building back his stamina and strength running and playing with his sisters.  He is still restricted to behind the scenes areas, so visitors are not likely to see him until possibly late January.  If all goes well, Redd will be cleared to play in the large yard mid to late January and, if the weather cooperates, visitors might be able to catch him out and about in the show yard soon! We appreciate everyone’s concern and well wishes!