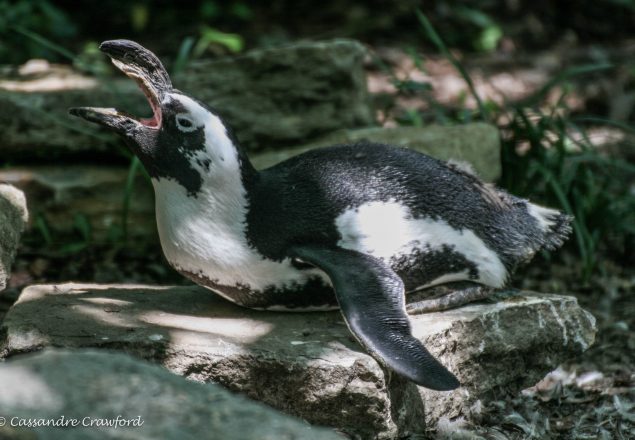 On this Penguin Awareness Day, we’d like to share a little bit about each of the five penguin species the Zoo is currently home to: king penguins, rockhopper penguins, Magellanic penguins, little penguins, and African penguins. Keep reading to learn more about each of these species and how you could even paint with a penguin!

You can meet our king penguins during the Penguin Parade at 11 AM and 2:30 PM, Fridays through Mondays during the Zoo’s half-priced Penguin Days, presented by FirstEnergy Solutions, through March 10 (weather permitting). Curious about who you’ll be walking with in this parade? In this blog post one of our bird keepers from the Aviculture Department identifies the king penguins and tells you a little more about them.

Named for their ability to hop between rocks and scale cliffs in search of safe breeding ground away from predators, rockhopper penguins can be found inside our Wings of the World bird exhibit with our king penguins and Magellanic penguins. Like other penguins, both the males and females will help take turns caring for their chicks.

Did you know that the Zoo is actually home to the largest colony of little penguins in North America? The little penguin is the smallest of the 18 different penguin species found around the world and is known by several other names including little blue penguin and fairy penguin.

The African penguin is perhaps the most endangered penguin species at the Zoo and is one of 10 species that the Association of Zoos & Aquariums (AZA) has decided to focus on through its Saving Animals from Extinction (SAFE) initiative. This initiative is meant to leverage the massive audience from zoos and aquariums to help save animal species on the brink of extinction.

We currently have 12 African penguins living at the Zoo, ranging from five to 33 years old. Bubba and Charlie star in our summertime Bird Show. We have four monogamous pairs (Izzy and Dyer, Chili and Penny, Violet and Cal, and Astro and Chance) as well as two bachelors named Dobie and Godzilla. The latter 10 can be found living in the Children’s Zoo next to the little penguins, weather permitting.

Paint with a Penguin and Support Field Conservation!

One of the ways in which we support endangered species’ conservation is through our behind-the-scenes tours during which visitors can meet our animal ambassadors and learn more about their species while aiding in conservation. In 2016, the Zoo conducted 40 VIPenguin tours. Participants had a chance to meet our indoor, cold weather penguins inside their exhibit and participate in a painting session with one of our penguins.

A portion of the proceeds from these tours are donated to SANCCOB, an organization that has bolstered the African penguin population by 19% since their doors opened in 1968. Currently they admit about 1,500 endangered African penguins into their centers every year and are estimating that there are less than 23,000 breeding pairs left in the wild. One of our Wild Encounters Interpreters, Alex Wiedeman, had the opportunity to volunteer at SANCCOB and says of his time there, “Volunteering at SANCCOB was a transformative experience. It was my first hands on contact with wild members of an endangered species. I was finally able to understand what global conservation efforts looked like in person. They really live up to their slogan, they save sea birds…There were a few penguins with oil in their feathers there. I never realized how much oil in feathers was like gum in hair, truly nasty to remove.”

Even though today is Penguin Awareness Day, we encourage you to celebrate penguins every day of the year! Stop by the Zoo where you can see multiple species of penguin, walk with them, and even make a masterpiece with one.

One thought on “Meet Our Penguins!”