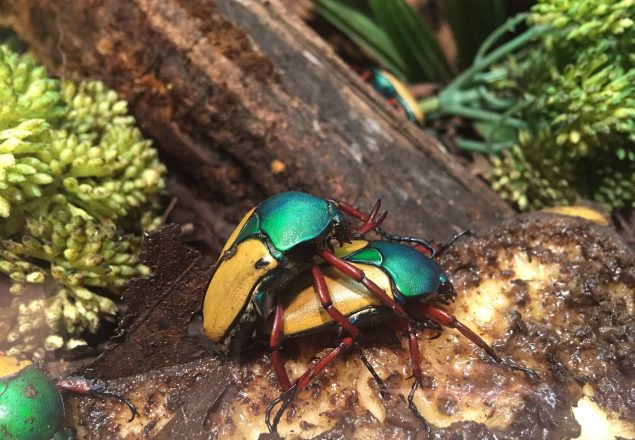 If you’ve ever walked through the World of the Insect and had to explain to a young child what some of our more promiscuous insects were up to, you may have realized that this is by far the most “romantic” department in the zoo. Insects are vastly diverse and highly specialized to live in nearly every corner of the earth, but above all they are significantly adapted for one thing: reproducing! Insects are very often at the bottom of the food chain and therefore many of them fall prey to predators. Because of this, many have evolved to produce large amounts of offspring in a relatively short amount of time. Generally speaking, insects have short life spans and must get down to business as soon as possible to pass on their genes to the next generation. In observation of Valentine’s Day this week, we wanted to share with you a few aspects of insect “love” that you might witness on your next trip to the Cincinnati Zoo & Botanical Garden.

First things first, insects must find a mate. Butterflies and moths are known to release pheromones to attract a mate. Crickets and Katydids will use sound to communicate that they are looking to breed. There are lots of methods and adaptations that insects use to find a suitable mate. One great example at the World of the Insect is our group of Giant Spiny Leaf Insects. Like some other tropical species of stick insects, the males possess wings and the ability to fly. This helps them locate and select a mate more easily. It seems a bit unfair that the males can fly and choose their mate and the females cannot, but there’s a valid reason for this. The females are much larger because they are responsible for producing and laying eggs. Since they are less mobile, they are also more brightly colored to better blend in with their tropical environment and stay safe from predators. They’re also equipped with spines on the insides of their legs that they do not hesitate to use as weapons when they feel threatened. We use the term sexual dimorphism to refer to the differences in size or appearance between the sexes of an insect or other animal, and it is incredibly obvious in this species.

For some insects, once they find a mate there may still be competition to deal with. The males from many of the species of beetles in the world will actually fight each other to win a chance with a female beetle. Stag beetles have modified mandibles to grab and flip their foes while other beetles have horns they use for shoving and whacking each other. You can see this happening every day at the zoo with our jade-headed buffalo beetles and our magnificent flower beetles. The males are equipped with horns that they use to shove each other off of logs or branches. Usually the largest males with the largest horns win the battle and get a chance to pass on their genes to create the next generation of beetles. This fighting behavior is also used to win prime beetle real-estate and fallen fruits that the beetles like to eat.

Plenty of insects die shortly after mating or shortly after egg laying. Many giant silkworm moth males die almost immediately after mating while the females only live a little while longer to lay eggs. Female tarantulas can live upwards of 20 years while male tarantulas are notoriously short lived and often times can only hope to live long enough to mate. All of the tarantulas on display at the zoo are female. Our leaf cutter ant colony at the zoo is also a great example of male arthropods with short, goal oriented life spans. The queen ant will live for several years while the male (known as a drone) will live just long enough to mate. In fact, our queen ant only mated during the short period of time before she started her colony and yet will continue to lay eggs throughout her lifespan. The colony only produces drones when they need to start new colonies. These drones have wings so that in the wild they can fly away to reproduce, but otherwise do no other work for their colony. All of the thousands of workers in the colony are female, even the big soldiers.

Finally, we couldn’t possibly leave the most well known insect mating custom off the list. Yes it’s true, sometimes after mating a female praying mantis will turn around and eat her mate head first. This is often beneficial to the species as a whole, so don’t feel too bad for that mantis. After mating the female will spend tons of energy creating an egg case and dozens of developing baby mantids so eating her mate ensures she has at least one good meal to get started. Table for 400, please! For the male, being eaten means his offspring are more likely to survive. Sometimes when we have just a single male mantis who is too valuable to risk losing to a female, we will have to pay close attention to when they’re done mating to pull him out of the enclosure before he becomes the wedding feast. Another way to avoid this is to make sure the female is extremely well fed before the couple is even introduced, and of course keep her well fed afterwards.

The courtship and customs of the insect world are nearly as diverse as insects themselves. With almost a million described species on the planet each one has its own relatively unique way of multiplying. In general, it’s hard to walk through our insect exhibit without witnessing some love bugs in action. Since insects live short lives and are an important food source for many other animals it is important that they continue these sometimes strange habits.