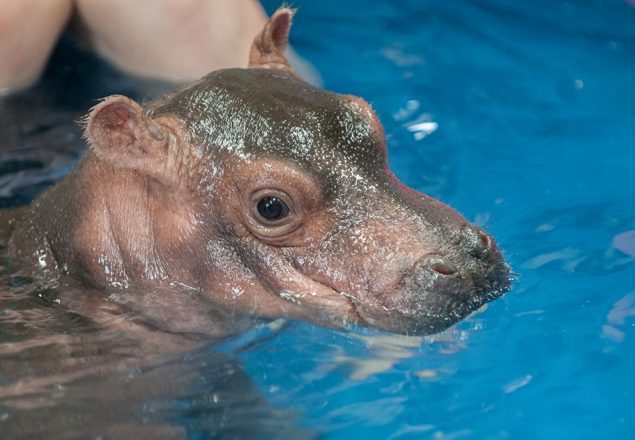 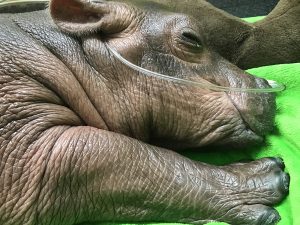 Today is Fiona’s 6-week birthday! Since Fiona was born at least 6 weeks premature, this means she has finally reached her original due date, and at over 70lbs, Fiona’s weight is now a normal birth weight for a non-premature hippo! She has shown consistent forward progress for the last couple of weeks and seems to be growing stronger everyday. At this time she is still receiving supplemental oxygen via a nasal cannula that she wears on her face whenever she is sleeping or resting, but we hope to begin weaning her off of the supplemental oxygen in the coming weeks.

With Fiona’s recent weight gain and improved health, it’s only natural that many of us are thinking about the distant future and asking how and when Fiona might be reunited with Bibi and Henry. For this blog, I’ll do my best to fill in some of those blanks and help everyone understand a few of the next steps in little Fiona’s big journey. 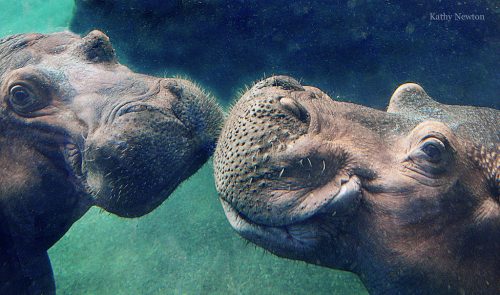 At this point, Fiona is not spending any time in direct contact with Bibi or Henry, primarily because she is still considered immunocompromised. Premature babies’ immune systems are underdeveloped and their bodies have a tougher time fighting off even minor infections. Our veterinary team is able to assess the strength of Fiona’s immune system by testing her blood for immunoglobulins, or antibodies, which are the special proteins that fight off bacteria, viruses and toxins that may enter the body and cause illness. Until Fiona’s immune system is better developed, she must be kept in a relatively sterile environment to minimize the chances of her becoming sick. Unfortunately, it would be incredibly difficult to allow Fiona to spend time with the adult hippos without also exposing her to a number of pathogens that could result in life-threatening illness. Until her immune system is strong enough to handle all the environmental pathogens, Fiona will continue to be housed in her more sterile nursery space. 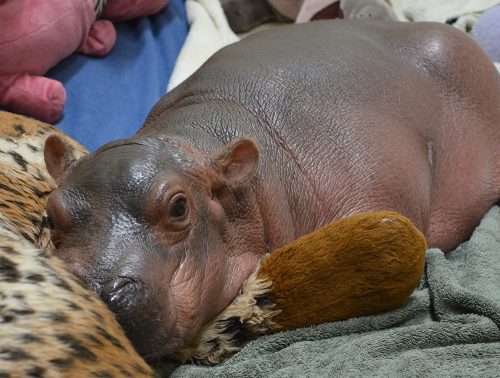 When Fiona’s immune system is strong enough to tackle a more messy world, she will be moved to a large space adjacent to the adult hippos. Our maintenance team is modifying this area to create a more preemie-friendly environment that is tailored to Fiona’s special needs. A heater complete with thermostat will allow us to keep her space warmer, which is crucially important for helping Fiona maintain her core body temperature. A custom platform with special mats and ramps can be modified regularly as we continue to step up the size and depth of Fiona’s training pools in tandem with her improving aquatic abilities. And most importantly, Fiona’s new digs will eventually allow her to safely interact nose-to-nose with Bibi and Henry through a protective barrier!

When animals are housed next to each other but still have protective barriers separating them, it is called a “howdy” set-up. The howdy set-up allows animals to get to know each other safely and on their own terms before they live in the same exhibit or indoor space together. Howdying animals is an incredibly useful technique in the zoo world as it allows the keeper staff to observe interactions and assess whether animals will be compatible together. Howdying can be used when introducing brand new animals to each other for the first time, or it can be used to reintroduce members of a group that have been temporarily separated for medical care. Although howdying does not guarantee a harmonious union (or reunion), it is often beneficial to the process and can help keepers predict how animals will interact when finally put into a shared space.

Some of you may be wondering why the howdy step is even necessary since Fiona is the offspring of Henry and Bibi. Won’t they just welcome her back to the family? The answer to that is: not necessarily. With healthy baby hippos, the mother and baby spend the first 10-12 days together away from the rest of the bloat so that the baby can gain its strength and also imprint on its mother. Since Fiona was not healthy enough to spend that imprinting period with Bibi, Fiona may not recognize that Bibi is her mother and similarly, Bibi may not recognize Fiona as her daughter. This does not mean that they won’t accept Fiona or embrace her as one of their own, it just means that in their hippo brains, the parent/offspring relationship might not exist. Instead, she may be viewed as just a new female hippo joining the group. Generally female hippos do not display territoriality so we don’t anticipate any problems with Bibi accepting Fiona. And while male hippos do display territoriality towards other males, Henry should not have any reservations about allowing a new young female to join his pod. As Fiona has shown us time and again, there are exceptions to every rule, but at this point, we are cautiously optimistic that Fiona will be accepted readily into the bloat when she is big and healthy enough for that transition.

So in the coming weeks, you can expect to see Fiona moved into her new “howdy” area where she will begin protected interactions with Bibi and Henry. Additionally, the care team may begin slowly decreasing the amount of time we are with Fiona so that she can start to develop her independence and begin recognizing Bibi and Henry as her main sources of companionship and comfort. These will be the first of several steps toward reuniting Fiona with her parents, but there are many more milestones she must achieve before she will be healthy and strong enough to safely hold her own among Bibi and Henry. As with all things Fiona, this timeline will not likely be set by any calendar dates. Instead it is much more important that we allow Fiona’s health and physical abilities to set the pace in order to give her the best chance possible at a normal, happy and healthy hippo life. The care team is just as anxious and excited as all of you to see what the future holds for Fiona and we will continue to keep everyone posted on her progress! #TeamFiona!