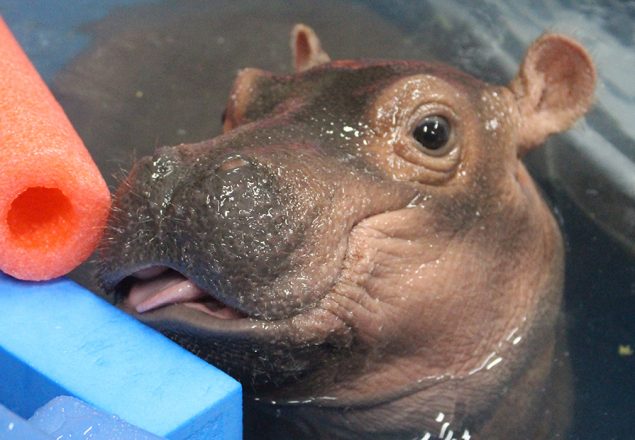 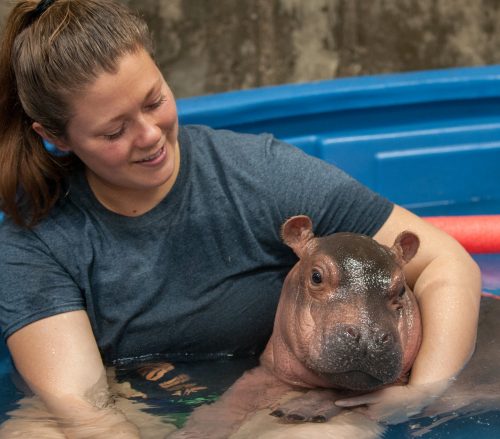 Fiona’s unique journey has captivated hundreds of thousands of people and has definitely taken the Greater Cincinnati area by storm. Her preemie status made her story all too relatable for many families, and her fighting spirit and refusal to give up has produced an underdog story for the ages. Now that the vast majority of the health hurdles are behind us, many of Fiona’s fans have asked how being hand-raised might affect Fiona’s future relationships with humans and other hippos. Though none of us have a crystal ball with the exact answers, we do have some insights into how being hand-raised might affect Fiona’s future. 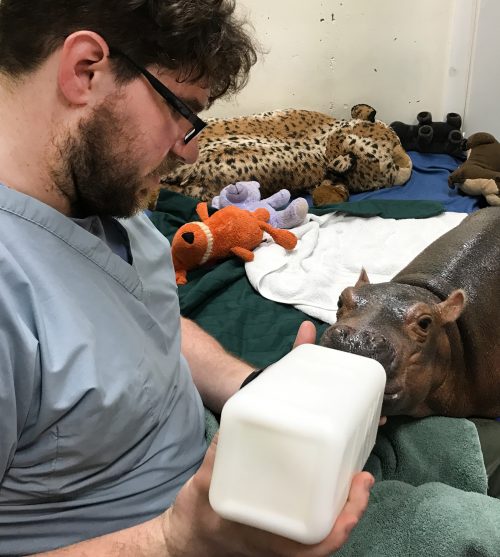 In terms of the social bonds that Fiona may or may not have formed with her keepers, the answer is somewhat complex. Hippos are considered gregarious animals but they are not necessarily social. This means that they do live with each other in groups, but they do not form significant social bonds; the only exception to that being mothers and daughters. Since Fiona spent her imprinting period (the first 10-12 days of life) with humans instead of her mother Bibi, we do believe she has formed social bonds with the care staff instead. She very obviously feels comfortable around us and seems to enjoy and seek out our companionship, and it is likely that she will maintain those positive associations with humans for the rest of her life. The good news is that her special bond with people should not significantly impact how she interacts with other hippos in the future, who will likely be viewed as friendly neighbors sharing space and resources. So in terms of integrating her into a bloat of hippos, her untraditional team of moms should not negatively impact her transition. 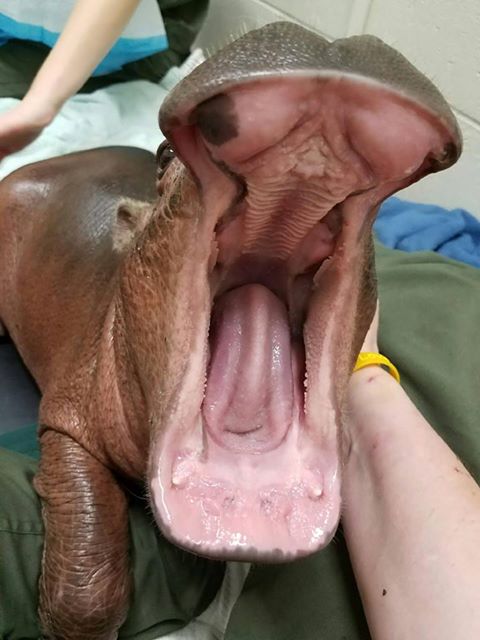 Fiona’s instinct-filled brain is hardwired to interact with other hippos, not humans, so naturally, that is how she has interacted with her care staff from day 1. On a baby scale, these interactions have all been manageable enough for the humans, but as Fiona grows and becomes stronger, many of those everyday interactions could actually become dangerous for the keeper staff. For example, hippos will often open their mouths wide and toss their heads in each other’s direction to convey different messages ranging from: “Back off! I need my space” to “Let’s play!” to “Who’s in charge here?”. You can see examples of Fiona exhibiting this behavior towards her keeper staff in many of the videos that have been posted, and similarly you will see many examples of this behavior between Henry and Bibi. While this behavior is entirely appropriate between 2 hippos, it will definitely become more of a problem for care staff as Fiona grows and continues exhibiting this behavior towards people.

Additionally, nap time is another example of an interaction with Fiona that will become dangerous for the care staff in the future. Baby hippos will often crawl onto their mother’s backs for a safe place to nap. At this time, Fiona seeks out the keeper staff and crawls into our laps to sleep. At just under 100lbs, this is already becoming a bit challenging for her human caregivers, and will only become more of a struggle and potential danger as she grows bigger and stronger.

So far, Fiona has not exhibited any outright aggressive behavior towards humans and may never do so. Regardless, we will eventually have to transition to managing her as we would any other hippo, using protected contact. Hippos are considered extremely dangerous animals and for that reason there must always be a protective barrier in place between the keepers and the animals so that we are never sharing the same space. These kinds of regulations are essential to ensuring the safety of the animal care staff as well as the animals, and are a staple of all accredited institutions. So even though Fiona has been sharing space with the keepers so far (in “free contact”), we will eventually come to a point when Fiona must be managed via protected contact, just like her adult counterparts. We do not have a predetermined date or even a set size that Fiona must reach before the protected contact is established, but with Fiona’s improved health and rapid growth, it will likely be sooner rather than later.

Although we have been thrilled to play the role of surrogate mother, the simple truth is that humans will never be able to be provide all of the appropriate and healthy interaction and companionship that Fiona can get from other hippos. Even if we could meet all of her physical and social needs, there would come a day when it is not actually safe for us to do so. Though Fiona may never want to harm a human intentionally, there are certain realities of working with a 3,000+ lb animal that even the most heart-warming stories of survival and love cannot overlook. Moving forward, it is in Fiona’s and the care team’s best interests that we begin focusing on transitioning Fiona into the bloat with Bibi and Henry and helping her become a healthy and well-adjusted hippo!