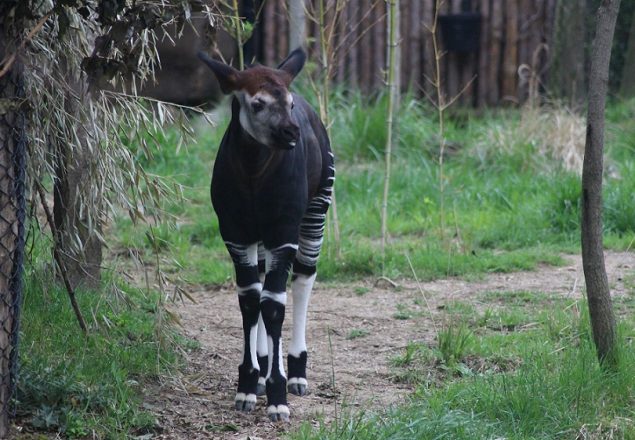 With an exciting Zoo Babies season quickly approaching, I thought it was time to highlight a very special, yet elusive new addition to the Zoo family. Moyo, a male okapi calf, was born on February 12th to mom, Kuvua and dad, Kiloro. The name Moyo was chosen because it means ‘to have heart’ in Swahili, a sentiment that Moyo seems to live by. Described by his keepers as adventurous, a trait not often seen in okapi calves, Moyo has spent a significant amount of time exploring his new surroundings independently.

Are you currently scratching your head trying to figure out if you’ve ever heard of an okapi before? It’s quite understandable. Okapi are still relatively unknown and understudied. In fact, they weren’t even discovered by the Western world until 1901. In the wild, the okapi can only be found in the Ituri Forest in the Democratic Republic of the Congo, a dense jungle that is hard to move through even today. It is believed that there are only around 25,000 okapis remaining in the wild, but it is hard to get an exact number because of their geographic location and elusive nature. There are only approximately 100 okapis under human care in North America, and even less in Europe, making Moyo’s birth a critical addition to the okapi gene pool.

Moyo is currently ending his nesting phase, a unique period during an okapi calf’s first few months of life where it will remain hidden to everyone except its mother. When a calf is first born, the mother will leave the calf in a hidden location, only returning to nurse, check-in on the calf, and bond. This will last for an incredible two to three months, during which time the calf will conserve its energy and remain silent so as not to become leopard lunch, and generally never leave the nest. Arguably the most fascinating fact about the nesting phase is that the calf will not defecate during this time. Any smell the calf might produce could attract a predator, so an okapi calf will not pass its first fecal until a few months after birth when the nesting phase is over. 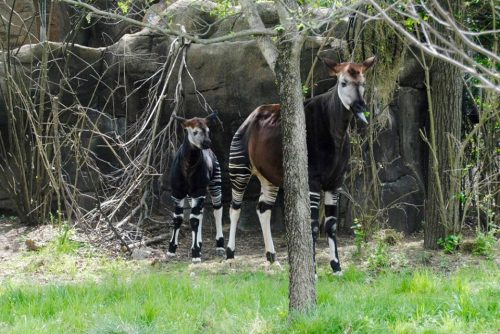 Moyo has begun exploring his outdoor habitat for short periods of time, but okapi calf and mom work on their own schedule, so there is no way to promise when exactly he will be visible to the public. As he ventures out more, and becomes comfortable with new environments, he will be visible more often. In the meantime, he is being well taken care of by mom and his animal care staff, who have established bonds with the adult okapis and can get close to observe Moyo when he ventures from his nest.

Beyond caring for okapi in Cincinnati, the Zoo supports the efforts of the Okapi Conservation Project (OCP), an organization working within the Okapi Wildlife Reserve in the Ituri Forest. OCP takes a holistic, grassroots approach by supporting the okapi as well as the local people who live near them. In 2017, OCP will continue to focus on conservation surrounding okapi and other critical species and on expanding community outreach and education. The organization saw a lot of success in 2016. Over 50 gold mines were closed in the reserve, which conserves land and reduces hunting of wildlife for bush meat. OCP also arrested 113 poachers, and initiated the first stages of a camera trap study to learn more about okapi. You can read more about their 2016 success here.

The next time you’re at the Zoo, don’t forget to stop by the okapi habitat (next to Rhino Reserve and across from the Wings of Wonder Theater) and meet these intriguing animals. You may have to look closely to see one of the okapi (their striped fur coats help them blend into their surroundings), but when you are able to see them, you quickly realize that this is a one of a kind animal with no comparison.