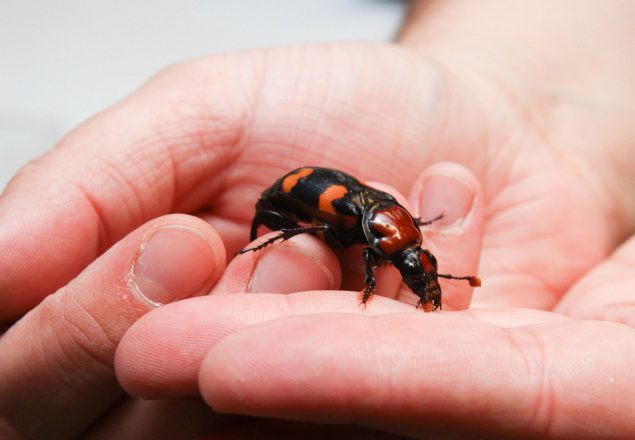 World of the Insect keepers from the Cincinnati Zoo just returned from a very important mission to the Sandhills of Nebraska. Their goal: retrieve critically endangered American Burying Beetles for the zoo’s reintroduction efforts in Ohio. The 20 beetles that were brought back from Nebraska are now at the zoo’s American burying beetle (ABB) breeding facility. Here, they will be matched up with a mate to hopefully create lots of offspring. Over the next 2 generations of breeding these 20 beetles, known as founders, will result in hundreds of brand new beetles that will be reintroduced to Ohio at a nearby nature preserve in 2018.

The USFWS and the Nebraska Game and Parks Commission were heavily involved in these efforts over the past week. Through permitting and on-site guidance, they were there to ensure that taking these beetles from Nebraska would not negatively impact the wild population.

The methods were pretty straightforward; set baited traps and return the following morning to see what we have caught. The traps are simply 5 gallon buckets buried to the brim, and a piece of plywood for protection that is propped up on a couple of sticks. The ABB makes a living utilizing carrion to raise its young, therefore our traps were baited with rat carcasses. This beetle’s lifestyle may sound gross, but bear in mind how important it is to have decomposers like this to get rid of carrion for us! They do an amazing job of recycling nutrients back into the soil – which makes the farmers and ranchers of Nebraska very happy.

Once we had beetles in the traps it was time to process them and record our data. Each ABB found in a trap was measured using calipers, sexed based on markings on their heads, and given a label that told us which trap it came from. The latitude and longitude of each trap was also recorded. The beetles were then placed into individual holding containers with bedding and food. We actually caught so many beetles that we were had to let most of them go! The 10 males and 10 females that were destined for Ohio came back to the hotel with us where they were kept cool and safe with plenty of food for the upcoming 15 hour drive back to Cincinnati.

This is the latest development in this ongoing reintroduction initiative. Since 2013 the zoo has reintroduced over 700 of these endangered beetles to Ohio in conjunction with the USFWS, ODNR, and the Fernald Preserve. Getting these founders from Nebraska is crucial to the reintroduction of this species. Without trickling in these fresh genes, our breeding population at the zoo would quickly crash. This species was once found throughout the entire eastern US, but is now only present in a handful of counties in just a few states. The Cincinnati Zoo is committed to our efforts of bringing this endangered animal back to Ohio. Click here to learn more about the American burying beetle.

2 thoughts on “Have Beetles, Will Travel”