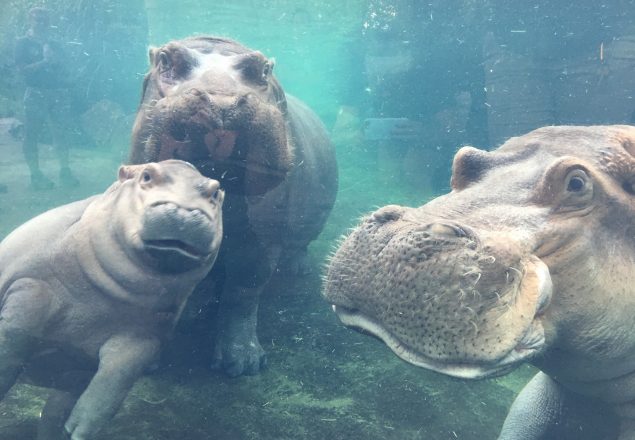 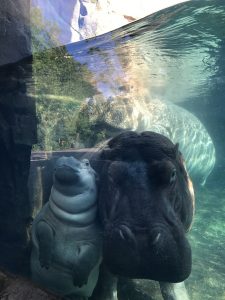 After almost 6 long months of working tirelessly towards a full family reunion for our hippos, we are ecstatic to announce that Fiona has finally been successfully reintroduced to both of her parents and we now have a happy little bloat of three!

If you’ve been keeping up with Fiona’s story through the blogs, you know that a couple weeks ago we hit a bit of a wall during reintroductions with Fiona’s dad, Henry. At almost 36 years old, it had been more than 20 years since Henry had last interacted with a baby hippo, and unlike Bibi, who embraced Fiona immediately, Henry was having a hard time feeling comfortable around Fiona. The two were making very little forward progress with their relationship, and though Henry had never made any outright attempts to hurt Fiona, it was apparent to the care staff that he was not comfortable sharing space with the baby hippo indoors and he seemed really unsure of how to interact with her.

After weighing all of the potential risks and benefits of the situation, we decided to try an introduction with all 3 hippos in the outdoor habitat. The hope was that the larger space would give both Henry and Fiona ample room to move away from each other if either was feeling uncomfortable or unsure. Additionally, we hoped that Bibi’s now well-established bond with Fiona would serve as a model for Henry. Perhaps if Henry observed how Fiona and Bibi interacted with each other, he might change his behavior appropriately to match. Additionally, we felt confident that Bibi’s protective instincts would kick in and she would intervene and defend Fiona if Henry were to get too pushy or aggressive with the baby. 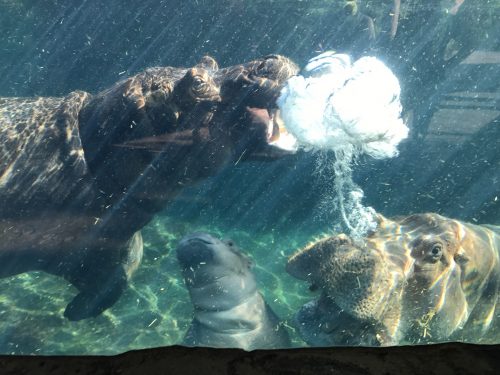 With several members of the care team supervising and ready to intervene, we opened the doors, let the hippos outside and held our breath. Fortunately for all involved, Bibi made it immediately apparent that she would be playing the role of both coach and referee during the outdoor introductions. She stayed close to Fiona and Henry at all times and did her best to correct Henry if and when his behavior towards Fiona became too aggressive or inappropriate. Most of our care team were shocked to see that the majority of Henry’s attention was focused on Fiona. As we’ve mentioned in earlier posts, Henry has grown quite attached to Bibi. However, during the introductions on habitat, Henry’s focus was almost entirely on Fiona.

In a surprising reversal of roles, Bibi was the one following Henry around the habitat as he and Fiona did their best to establish some sort of understanding and relationship between themselves. The first day of the introductions, Henry continued to interact inappropriately with Fiona, earning himself several admonishments from Bibi whenever he would swing an open mouth at Fiona or attempt to press her against a wall with his massive body. The scariest behavior to observe was when Henry would wrap his huge mouth around Fiona’s little body and give her a squeeze. This behavior thankfully only occurred once or twice and was never severe enough to cause any injury to Fiona. Each time Fiona would squirm away from him and, seemingly undiscouraged, return for more interaction. 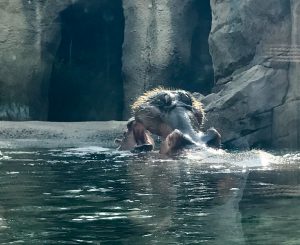 Equally frustrating at times was Fiona’s resolute refusal to leave Henry alone. From our perspective, it seemed as though Henry was doing everything in his power to communicate to Fiona that he wanted space. Whenever Henry would attempt to ward off Fiona, she would simply turn her backend towards him and sit down, a baby hippo’s way of showing submission. But after her submissive demonstrations, instead of moving away from Henry or letting him leave, Fiona persisted, adamant to interact with him and win over the one being on the planet who had not yet fallen in love with her. In spite of all their prior altercations, no amount of negative interaction seemed to discourage Fiona, and perhaps because Bibi was nearby to serve as protector, she continued to test her boundaries with Henry.

Not wanting to push Henry beyond his limits, the care team decided to end the first round of full introductions on habitat after only one hour. The next day, we repeated the process and all 3 hippos spent about 2 hours in the habitat together. As with the day before, we saw much of the same behavior: Fiona trying to force a relationship and Henry hesitant, uncomfortable and unsure. Day 3 was when the real magic happened and everything finally seemed to click for the father and daughter pair. From the moment they greeted each other that morning, Henry seemed much more at ease and relaxed around Fiona. Instead of trying to discourage her interactions, Henry finally seemed to embrace them! He laid in a calm and relaxed position in the water with his belly exposed and his mouth held open wide for Fiona to investigate.

Fiona being playful with her Dad. Hippos use their mouths to play, show affection, give warnings, and explore their world. pic.twitter.com/VCyVTHlMSa

Fiona eagerly explored every square inch of Henry’s giant mouth. She examined his tusks and suckled on his great big jowls, and at one point she even grabbed his massive tongue with her little mouth and attempted to pull it out! It was hilariously cartoonish to observe, but even more important was Henry’s calm and accepting response. He rested in the water, totally relaxed, his eyelids growing heavier and heavier, and he seemed to thoroughly be enjoying his mouth massage. He patiently allowed Fiona to lick, bite, poke and prod to her heart’s content. And even more encouraging was Bibi’s behavior that morning. Bibi, who had become a sort of barometer for Henry and Fiona’s interactions, rested in the water several feet away, dozing off and obviously comfortable enough with Henry’s conduct to finally let her guard down. Seeing Bibi this relaxed in the presence of both Henry and Fiona gave the entire team a huge sense of relief.

Ever since that morning, all 3 hippos have been doing amazing together and spending increasing amounts of time as a bloat. They’ve quickly settled into a comfortable routine with each other, napping through most of the day and waking up in the afternoons for their snacks (and Fiona’s 2pm bottle) and then spending the late afternoons and early evenings exploring their habitat and playing with each other in the pool. When they sleep together during the day, all 3 hippos huddle close together, maintaining contact with each other, just like a bloat in the wild would do. Bibi continues to show an incredible amount of patience with Fiona and serves as an excellent role model for her, showing Fiona all of the ins and outs of being a real hippo. And Henry’s patience with his tiny new bloat-mate grows day by day as he finally seems to be embracing her presence. At this point, our 3 hippos are spending more and more time together on habitat, but there is still no set schedule or guarantees that guests will see Fiona during their visit. (But I can tell you the odds are definitely better towards the very end of the day!) 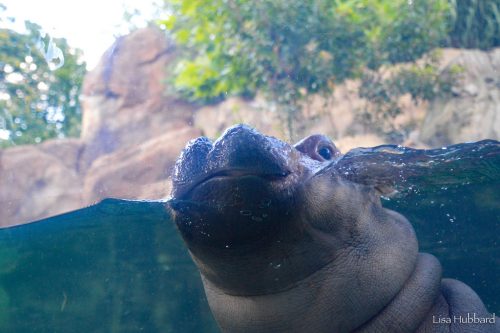 After so many difficult days and especially with the rough start Fiona had, there were many times when this end result felt like an unobtainable goal. But with each health hurdle overcome and each milestone reached, our team grew more and more confident imagining a future where Fiona would thrive as a happy, healthy and well-adjusted little hippo, bonded with both of her parents. It feels absolutely amazing to be able to say that our sweet little Fiona has finally made it to this place. In spite of the many, many hardships Fiona has had to overcome in her little life, her fighting spirit and incredible will has helped her to prevail time and again. And in a world where there seem to be so many insurmountable problems, Fiona’s story serves as a reminder to us all that humans are capable of some truly amazing things if we work together and dare to believe.

As always, we thank you so very much for your continued love and support for Fiona and her care team, and we will keep you posted! #TeamFiona!