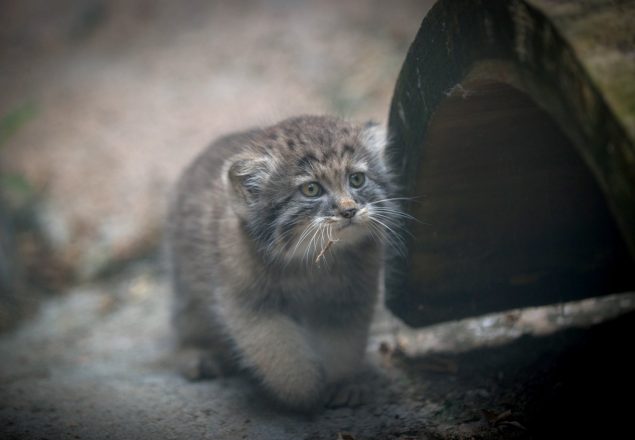 For several years, scientists at the Cincinnati Zoo’s Lindner Center for Conservation and Research of Endangered Wildlife (CREW) have been working to apply reproductive sciences, such as semen freezing and artificial insemination (AI), to improve the propagation and conservation of the Pallas’ cat, a threatened small felid from Central Asia.

In 2011, the first ever Pallas’ cat kittens produced by AI were born at the Cincinnati Zoo following a laparoscopic oviductal AI procedure conducted at CREW. That success has now been duplicated with a second birth of a Pallas’ cat kitten produced through AI, this time at the Columbus Zoo & Aquarium.

A pair of Pallas’ cats housed at the Columbus Zoo–Manda and Paval–were recommended for breeding by the Association of Zoos & Aquarium’s Pallas’ Cat Species Survival Plan (SSP). Though the pair was observed mating in the winter, the female failed to conceive naturally by the end of February.

After determining that she was not pregnant, CREW worked with the Columbus Zoo’s animal care and vet staff to conduct the AI in mid-March (near the end of their winter breeding season). Once again, CREW scientists used laparoscopic oviductal AI to inseminate the female, using freshly collected semen from her mate, Paval. This technique, developed by CREW scientists for cats, places the semen directly into the oviduct near the site of fertilization, which increases the likelihood of success.

Manda gave birth to the kitten on May 23, which is the first offspring produced by this breeding pair. The success is testament to the power of reproductive science and collaboration among institutions committed to the conservation of threatened species such as the Pallas’ cat.

8 thoughts on “Paws on the Ground: Zoos Work Together to Produce a Second Pallas’ Cat Birth through Artificial Insemination”