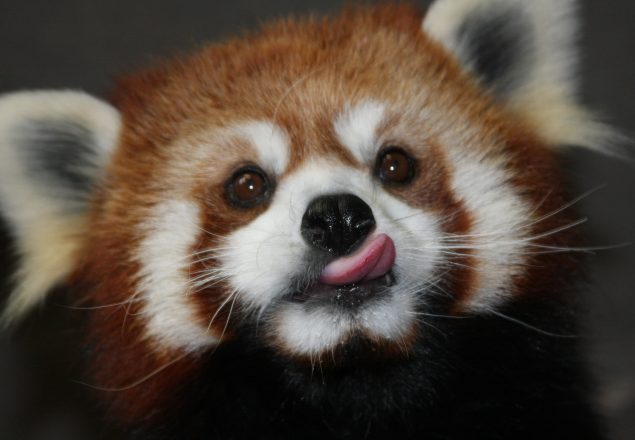 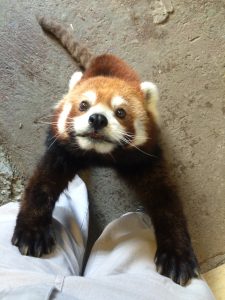 On August 10th the Wildlife Canyon staff had to say goodbye to longtime resident Liwu. Liwu, a red panda, lived at the Zoo since 2007 and, at 17 years old, was well past the median life expectancy for her species. Most Zoo visitors probably didn’t know her, as she hasn’t been out in the red panda habitat for several years. She has been in retirement in a specially-outfitted behind the scenes area.

I have worked with Liwu since the day she came to the Cincinnati Zoo and have had the privilege to watch her change and grow over the years. When she first came to us she was overweight, and a very good beggar with her puppy dog eyes. It took some time to get the weight off of her. She wasn’t able to climb trees because of her size but as the weight came off she found a whole new world and was back up in the trees. She was never a great climber and didn’t ever really go too far up in the trees. You could usually find her in the small Mulberry tree in the back of her yard.

Liwu was always happy to see you, especially if you brought food. On many occasions she would be waiting at the door for her next meal. Sometimes she would even help you open the door. She was always happy to visit with new people but she would let you know when she was done by walking outside to her nest box. She loved pulling sticks, bamboo, and straw into her nest boxes. Sometimes you would catch her in the middle of filling her box and she would look up at you with a mouthful of straw. If you had food she would spit it out and come greet you for her treat. Grapes and bananas were her favorites. Sometimes we would hide her treats in bags, boxes, toys, and other things she had to manipulate in order to get her treats. It was entertaining to watch her with her enrichment and it was good for her well being. 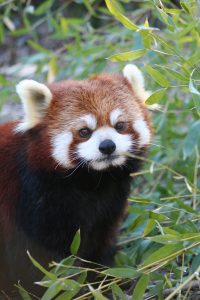 She never had any offspring of her own but was a companion for many of the cubs that stayed with her before being sent to other Zoos. She taught them many lessons, one being how to get along with another red panda that wasn’t their mother. She was also a teacher to her keeper staff. She and I learned together how to train for voluntary ultrasounds. She was the first red panda to master this behavior that helped us determine red panda pregnancy. She taught us how to care for an aging animal. As she grew older we had to modify her holding area to help her reach her nest box. We installed ramps to help her move around better. We also gave her a hammock on a frame that she could sleep in if she didn’t want to get up to her box.

Liwu liked to paint and walked across many canvases that we later sold in the Zoo’s gift shop to raise funds for conservation. We both ended up covered in paint many times! It was a messy activity. She put her paint-covered paws on my legs so many times that all of my pants have at least one foot print on them. 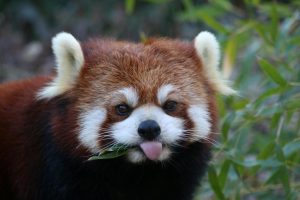 Liwu was not able to genetically contribute to her species but she was able to contribute in many other ways to help other red pandas. Since she started painting in 2011 she has raised thousands of dollars for red panda conservation and education. The money raised from her paintings has gone to the Red Panda Network and to the Red Panda SSP. She was also part of the Endangered Excursions behind the scenes tour at Wildlife Canyon. Guests were able to meet her first hand and see her paint. I think it would be safe to say that most of the guests who met her fell in love with her! Maybe she didn’t have the big fluffy tail that younger red pandas have but she made up for it with her personality and adorable face. 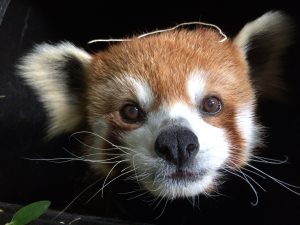 There isn’t a day that goes by that I won’t think about her and all she has done for her species and for me. It has been one of my greatest joys to work with her. She has given me many great memories to hold on to in the years to come without her. (She is probably the only red panda to have gotten a car for her 16th birthday!) She has touched so many people’s lives and her legacy will live on for many years.